To Chancellor Carmen Farina - Tomorrow Really Is A Beautiful Day. 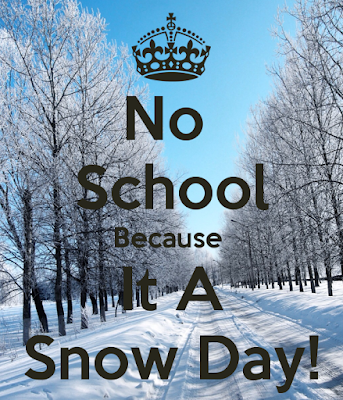 Back in February of 2014, Carmen Farina, the newly appointed Chancellor of the New York City schools wrongly decided to keep schools open, despite the National Weather Services forecast of heavy snow just when children where traveling to their schools.

Her poor decision making was compounded by her statement that "it's a beautiful day", despite a heavy snow and sleet storm happening at the moment outside her window.  She then claimed that it was important for the children to have a hot lunch.  However, few schools had enough staff to make a hot lunch and the vast majority of students trapped in their schools ended up with cold sandwiches.

To make matters even worse she justified keeping the schools open because it was a babysitting service for parents.  Of course most sane parents did not go to work and kept their children home rather than threaten their safety due to the elements.  Moreover, aren't schools for educating children and not a babysitting service?  Finally, it was the first indication that Chancellor Carmen Farina was following the Bloomberg ideology to keep schools open at any cost, even if it potentially threatened the life and limb of children who travel to school through heavy snow and icy roads.

Now that Chancellor Carmen Farina is apparently retiring at the end of the school year.  She and Mayor Bill de Blasio have realized that its more important to keep children safe and have closed schools,  Now tomorrow is really a beautiful day!
Posted by Chaz at 8:14 PM

Yeah!!! I was just wondering...what happens if someone called in sick already for tomorrow and now the schools are closed... is the time still deducted or not? Also, do the number of teachers who call out in advance have any influence on whether or not schools are closed?

A more beautiful day will be Farina's retirement day.
Also, the UFT endorsed De Blasio for one- term mayor.

If anybody thinks that the mayor closed the schools for any other reason that he wants the UFT's endorsement for his re-election, I have a bridge for sale for you in Brooklyn.

934, but it also shows you how dumb they are. Both sides. Knowing the storm is coming, it is such bad optics. Let's just say that all sides have good intentions. We know it's not true, but humor me. This endorsement assembly was obviously planned, and they had no way of knowing about the snow, but they had no thoughts of saying, "this looks bad, let's wait a week". No one said, "with the blizzard coming, this will not really get any coverage, let's wait." This is why the Unity folks are morons.

Congrats on the snow day. I am excited for y'all. My agenda today is to stay inside and work on some projects!

So, we are gonna get Bill re-elected and what do we get in return? A friggin' snow day? Big deal. We want our parking permits back and 2 observations just like the rest of NYS. Throw us a bone already Biill!

Justin Stark recently gave me a "U" on a great lesson out of license with students I didn't know.

Chaz, hope you can answer this...
For a death in immediate family, you get the day of death plus 3 additional days(4 total). Since today schools are closed, does today STILL count as one of my bereavement days? Or do I now get an additional day... since school is closed?

Justin Stark's parents are first cousins. It explains a lot.

Are you reading your fan mail prick?

Gatinvisible said...
This comment has been removed by the author.
8:41 PM

Don't be fooled bloomberg was scum and would never close our schools unless the midget actually saw snow flakes....yesterday was a revolution in that the schools in nyc were closed without a single snow flake dropping at the time. Bloomberg is a real piece of crap and anyone notice how quiet he has been with all this trump stuff?? Be ware for the man behind the curtain

Mulgrew put ATRS in this situation so abusive and dishonest roving supervisors can use gotcha policy.

No wonder success academy crap schools open on the snow day as moskowitch is cut from the same mold as bloomberg. Bloomberg and moskowitch are such scabs and then they wonder why people don't like them. Moskowitch is a dangerous witch people who flies around NYC each day casting spells on everyone like the wicked witch of NYC. Parents of success schools were furious yesterday and make no mistake about it, if midget mike bloomberg were still around nyc schools also would have been open because moskowitch and bloomberg are cut from the same cloth. Disgusting disgusting people like bloomberg and moskowitch who do not care a slither for anybody but themselves and that is no fake news aight.

Here are some model reply letters:

Thanks. There is a lot of useful information there, especially for ATR's. Did not know about it before.

It is time for Fariña to go, there is too much disrespect for teachers and dishonest practices are being used to increase the graduation rate.

Where is the real news story that Carmin Farina is hiring predominantly all Hispanic principals, APs and other school leaders into the NYC DOE. Not one article has touched upon this discriminatory hiring practice!. Please address in a future blog. Thanks!