My Response To The New Tork Times Biased Article On Principal Removals. 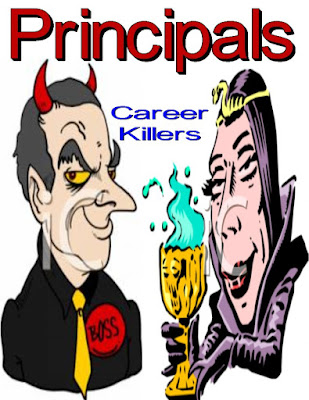 I read and reread the New York Times article on how three principals were removed and quickly realized that the entire article was based only on the principals side of their reassignment.   The article was clearly biased as no teacher or Chapter Leader were interviewed, only the three principals and their supporters.  Occasionally, in the article they did get a quote from UFT President, Michael Mulgrew, but the reporter did not bother to interview any staff members who were involved in the complaints.

The three principals were Santiago Taveras, Kathleen Elvis, and Nadav Zeimer.  All of whom violated the Chancellor's regulations and most importantly were universally hated by the teaching staffs and were considered career killers.  All were removed and rightly so.  Unlike teachers, they still kept their salary and work in field offices.

In Santiago Taveras,when he was Deputy Chancellor under Bloomberg he was responsible for closing of the many large comprehensive high schools and earned the ire of the teachers union.  As Principal of DeWitt Clinton High School he was caught changing grades and built an illegal personal shower that the DOE had to dismantle.  Moreover, he was despised by the staff and targeted veteran teachers.

Then there is Kathleen Elvin who created the "Easy Pass" credit recovery system that jacked up the graduation rate.  Further, she also targeted veteran teachers and was one of the lowest rated principals when it came to the survey. Further, she was only exonerated by the arbitrator because the DOE refused to give the lawyers the evidence that the higher ups were complicit by approving the "easy pass" program.   Please read the New York Post's Editorial.

Nadav Zeimer, a Leadership Academy Principal, filed false and fraudulent charges against a teacher who was found totally innocent by an independent arbitrator.  The teacher was returned to the school and started to document the various violations the Principal did.  Eventually both SCI and OSI investigated and substantiated the violations. Here again the Principal was disliked by the staff. An example was when the teaching staff were forced to sit through useless professional development while Mr. Zeimer took his favorite administrators to  a notorious bathhouse. on school time.

The bottom line is that if you're a Principal and fail to cooperate and collaborate with your teaching staff and violate Chancellor Regulations, you deserve to be removed.

Eric...you need to write an article on how most (all) the ATR supervisors out there were administrators from failing / closed schools; inclusive of retirees and mid-career turncoats.

How did our useless union allow failed administrators come gunning for helpless ATRs? Suck ups like that inbred savant Justin Stark..... the graduation rate for the schools that he helped manage were abysmal!

I recently had a volatile discussion with Bryant Principal Namita Dwarka; she became unhinged with my perspective.

Namita said "You have no idea what I've been through...."

The way some principals, and, for that matter, assistant principals, treat teachers is beyond disgraceful!

New York Times is not the paper it used to be!!! Waaaayyyy back in the day a respected paper! Now a propaganda machine!!!

These people have no idea how a bad Principal cam destroy a school.

Namita Dwarka's been through lots and lots of Dick.....he, he, heh,

This line made my night. I’m laughing so hard I think I peed a little bit. Kind of like how dwarka peed on golden shower boy howard Kwait

I think the reporter got played. None of the principals were sympathetic characters.

It’s funny when I said the Post to teachers was the paper to read, they dismissed me because of the perceived politics. Now the Times is the Post, and the Post is the Times. If all the teachers just cancelled their subscriptions to the NYT and started subscriptions with the Post there would be a major shift in coverage. Teachers are too stupid to get this. It’s all data now, get with the program you idiots!!!

I apologize I landed on a case as a juror. It was a murder case and the defendent was guilty as sin. Could have taken us at most 5 hours to deliberate but I held out. Case actually could have ended May 20th but I held out and out and out. Finally, piece of crap juror told the judge in no uncertain words: "This fuckin guy is a teacher and he is holding out on purpose so he doesn't have to go back to teaching." What kind of human being would do that to someone? I was so hurt. The judge called me into his chambers and starting questioning me. Was so embarrassed but felt relieved to be out of my school for an additional 8 days.

Global Regents starts tomorrow. Good luck to all proctors. Proctors should get bonuses depending on how well students they proctor do on exams. I am trying to get this on the ballot in November. Support me.

No doubt the Council of supervisors and administrators influenced and promoted this biased and ill informed story. The author has written several stories that come from a management perspective. With the newly arrived chancellor reviewing the various components of this mass bureaucracy this story was timed and delivered as serious negotiations are taking place between the UFT and city negotiators. The recent spate of sexual harassment stories has embarrassed and forced the city to defend the DOE. The age old tactic of blaming the staff is an attempt to shift the narrative. The Times has always been available to play both sides. "All The News That's Fit To Print" For a price.

Many of these Leadership Principals are targeting experienced teachers but their regents results are plummeting.

The school is really in bad shape compared to 6 years ago. It is just a disaster now.

Minerva Zanca, the one accused of blatant racism, was removed but now works as a guidance counselor in some high school.

Monica Garg was removed from a high school for gross oppression by a rebellion from the parents, but just was moved to Tweed.

Double standards make us all disillusioned.

I heard dwarka is writing a tell all book about her relationship with Howie Kwait.

Sorry, but I was given false intel. Dwarka must learn to read and write first.

Seems many many admins removed from schools end up at Tweed and district offices. As a dean right now whenever visitors come from Tweed or a district office - I always ask them "what school were you removed from?" They usually tell in an nonchalant manner tell me. It's like they are used to being asked.

It is not true that those principals are “universally hated.” Your account is as flawed as the reporters’ you complain about. You fail to mention the vast improvements in the schoos’ performance and the many students who benefitted before their principals were removed.

Yes it's true. His last year he had only a 59% Trust rating. The City average was 86%. Moreover, only 43% of the teaching staff, the City average was 87%. When it came to the Principal giving clear and focused guidance. Finally, the school had dropped to a 4% co9llege and career readiness grade.

That tells you he was a failure as a leader.

I ran into Justin stark in target in the personal hygiene section. He looked confused trying to comprehend what soap and deodorant and mouth wash were used for.

He then introduced me to his wife. I asked how they met and stark said,”she is my mom’s brother’s daughter. We went to prom together.”

Since stark googles himself, I can’t wait until he reads this.