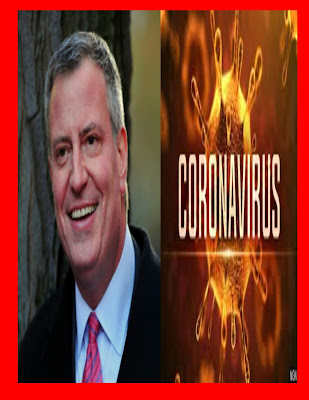 This is where mulgrew also failed us.

I know there is a Taylor law, but a threat of a strike should have existed

What will happen when the April 20th date comes and the mayor once again shows his ineptitude?

So, they give each other back rubs and whisper "that-a-boy!" into each other's ears as solace to their shared ineptitudes. It is all about the sweet nothings, baby!

For them , the Corona virus is not so much a pan-demic, but rather a dem-panic!

The subway is a nice place to meet new viruses today

Sorry, Cuomo initially refused to shut down the city after De Blasio said he wanted it.

New message from Mulgrew that we now have to work April 9 and 10 despite religious observances. We will be granted 4 extra CAR days which we can use on those days. Of course, Mulgrew did nothing but disagreed.

So Trump right? Be serious.

He is the definition of a fuck up, he has no respect from anyone, he is so fake Bill De Blasio is not even his real name its Warren Wilhelm Jr, this walking piece of shit.

Between Cuomo and moron there was absolutely no preparation only complaining we don't have this we don't have that. Coumo has failed to with wasting so much money like 750 million for solar or 90 million on a lighting company. He is terrible just as moron mayor is.

Even Fauci who everyone has been saying raving about got it wrong in January.

All the US health care experts were faked out by the virus and that includes Fauci.

In a January 21 interview Dr. Fauci says not to worry about the virus. (He has since said that China's misinformation regarding the virus is why he and the other experts were caught off guard. He says he would have advised an immediate shutdown on all visitors who were coming straight from China or who had been in China as part of their travel itinerary. He also said all the European countries would have done the same.)

And our CDC botched the early tests - not that tests stop the virus from arriving and spreading or even help to cure folks or even vaccinate folks but they are one useful tool.

Cuomo's lack of planning is an open secret - the state stockpile of necessary equipment is woefully inadequate and the small federal stockpile is shared amongst 50 states as needed.