Dennis Walcott, The Mayor's Poodle, Talks About Teacher Layoffs, Charter Schools, And Reform But Is Silent On The Topic Of Administrative Bloat. 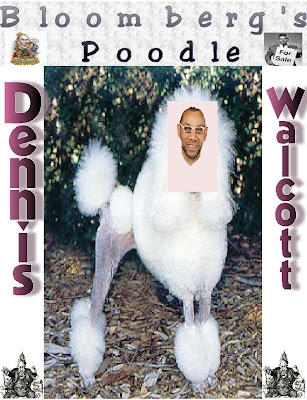 Now that the Mayor's poodle, Dennis Walcott, is Chancellor you might expect things to change. However, according to the new Chancellor, the Bloomberg agenda is his agenda. Dennis Walcott speaks about teacher layoffs, Charter school co-locating in neighborhood schools, and school reform. However, when it comes to eliminate the Administrative bloat at the DOE, he has nothing to say.

A case in point, the Mayor's poodle showed up at the New York City Council to explain the 2012 budget and merely echoed the Mayor's position. The New York City Public School Parent blog printed the entire exchange and it is an eye opening experience about the DOE fuzzy math and how Dennis Walcott tried to evade questions that made him uncomfortable Here.

The Mayor's poodle may be nicer than the nasty Joel Klein, and smarter than the clueless Cathie Black but when it comes to following the Mayor's policy, he is just a lap dog. It is still the Mayor first and children last...always!
Posted by Chaz at 6:23 PM

Even worse, Walcott will offer a polished more informed view than even Joel Klein, but the result he will be more of a zealot. He is Bloombergs lap dog and will earn more brownie points the more he pushes the agenda. Charles Baron said it correctly, we do not want a new face, we want new policies, good luck.

Your negative about everything. You think your something special and you deserve tenure and a pension. Until recently you stopped attacking your union who represented you in your 3020-a which resulted in you being found guilty, but not terminated.
You have refused to post a copy of your decision. Your lucky to have a job and when the layoffs come your going to be the first to go.

Of COURSE we deserve tenure and a pension. That's what the contract says..you know...THE CONTRACT ??? Do you understand the concept of contract? It's the basis of Western civilization. We happen to have a contract that states we "deserve" tenure and a pension. As do many civil servants, INCUDING ex-Chencellor Klein ( who was quick to cash in HIS papers for HIS pension). Walcott, Senators,Congressman, firemen, policemen, sanitation workers. ALL of these people "deserve" a pension, and job security, since they have a "contract" to stating so...idiot...

Sounds like "sour grapes" on your part. You must be one of those Tweed administrators.

Tweed administrator and a troll indeed! I love the graphic which depicts the role Walcott has been playing for the past decade....Bloomberg's lapdog!! Since he has polish, he can play the role of poodle instead of mutt. He will definitely roll over.

Anonymous said...
This comment has been removed by the author.
8:20 AM

Actually Anon 11:35, it's YOU who should lose his or her job. You don't even know the difference between your and you're.

In the end, that, or THIS is what THIS is all about-one group trying to take what belongs to another group. The oligarchs and corporatists, fronted by naive newbie teachers, and anti-union lackeys in a hostile takeover.

Of course this will all descend into a fist fight on all levels....

Tenure is in the Education Law, not the contract. Thank god they both can be changed.No one including the Chancellor is entitled to a job for life

First, tenure is given by the Principal not automatically given to teachers.

Second, State Law 3020-a allows the School District to file termination charges against tenured teachers. If they prove their case, the teacher is terminated. This is called "due process".

Anonymous 11:35: There's YOUR, YORE, and YOU'RE!! For example:
1) YOU'RE a troll (or gaping asshole, depends on the situation).
2) YOUR ideas are education "reform" retreads.
3) We long for days of YORE when teachers weren't persecuted for choosing this profession and doing it for over 25 years.