Mayor Bloomberg Has Started Phase Two In Attacking Seniority-Based Layoffs By Getting The NYS Senate To Take Up The Case Once Again. 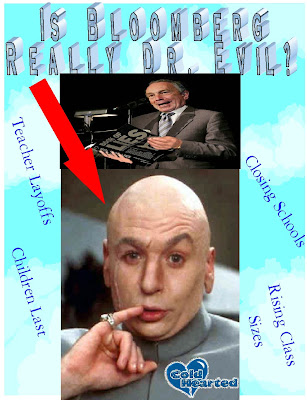 It certainly looks like that phase two of Mayor Bloomberg's attack on seniority-based layoffs or "last in, first out" (LIFO) has started. First the Bloomberg/Klein/Murdock mouthpiece, the New York Post, ran a four part serious on the teacher discipline process. In response to the Post stories the Senate Education Chairman, John Flanagan will start a legislative probe on the disciplinary process for New York City teachers, he said the following:

"I don't think anyone should shy away from having open, fair discussions," he added. "I think holding hearings would be a good idea."

The Post also reported this as well that the state Senate education chair said he'll hold a legislative probe on the disciplinary process for city schoolteachers in the wake of a Post series highlighting problems that have plagued the system for years.
Notice that John Flanagan said the proposed probe will be only about New York City teachers and not Statewide despite having the same disciplinary process? Furthermore, Mr. Flanagan's definition of "fair" must be taken with a grain of salt. Remember he passed the one-sided Bloomberg Bill to end LIFO for New York City teachers only and never even talked to the teacher unions or the Governor's Office to get their input. In fact, he tried an end around on teacher "due process" and union "collective bargaining rights" to help the Mayor in Phase one to end LIFO. Does anybody really expect John Flanagan to have a "fair hearing"? If you do, I have a bridge to sell you. The entire New York Post article can be found Here.

Look for John Flanagan's so called "fair hearings" to result in an to issuance of a report that demands an end to LIFO and the suspension without pay for New York City teachers who face discipline. Nothing else would appease the Mayor in phase two of his attack on seniority based layoffs. What the Mayor wants, the Mayor gets, when it comes to the Republican State Senate.

Once phase two goes nowhere. I can't wait to see what the Mayor's phase three plans are. Fire all New York City teachers and get his Republican lackeys to pass that exemption to the New York state law prohibiting the Mayor's plans. Fat chance. If only the Governor and State Assembly would just get out of the way and let the Mayor do what he wants.

I guess Blunderburg still has time to play games. How long does he have, middle of June to give final numbers? Supposedly May 5 he'll give layof numbers, but I still don't believe anything they say. He's hem and haw till the 12th hour. unless he gets what he wants.

How late can he delay the final layoff numbers?

How many hours during those 7 days did you spend grading paper and doing lesson plans? The rest of us worked a minimum of 56 hours.

I work 55 to 65 hours a week so I do not have to do work at home. You work 35 hours a week and do 5 hours of work a home a week. Please do not complain about how much work you have to do.

Everyone else works at least 1,944 hours a year (243 days x 8 hours a day, note that this assumes an 8 hour day and no work at home which is very rare). The rest of the US work force works 20% more than teachers. Many of us work 2,430 hours a year or more and earn little more than a teachers salary. Please also note that we work this and do NOT have a sweet pension plan.

I understand that I chose my career and you chose yours but please stop complaining as if you are abused. You teachers assume that everyone that is not a teacher is earning $1 million a year and have all these great benefits. In all reality almost all of us work long hours with minimal benefits at salaries that are no better than a teacher’s salary. A majority of us do not want to be teachers but would kill have the same pay, hours, benefits and pension that teachers have.

There IS NO "everyone else." You make no sense, and are clutching at straws.

We are not "complaining" about our work. We have chosen this professional field, and I have pursued it for fiteen years.

We are "complaining" about the criminally unjustifed public scapegoating, and the intended destruction of our lives, by questionable saints like Blunderburg, Klein, Gates, and Duncan.

Wow. I am sorry you have to work so hard and get paid so little, with no benefits. It seems unfair, and I encourage you to start a union in your line of business so that you may improve your quality of life.

Anon 6:57
If you want to improve your pay or working conditions I suggest you organize your co-workers. It will not be easy and it will take courage. If you focus your energy, math skills, and efforts to that end you will be surprised how your jealousy and miserable mood will vanish. That in itself may be rewarding. Take heart and best wishes.

If teaching in NYC is such a great gig, then why is it that 50% of the teachers quit within 5 years?

One percent of the population owns this nation: it's resources; it's government; it's military. You are focusing your anger on people who do not belong to this one percent. We are the people who dedicate our lives to educating other people's children. Where were the children of New York on 911? With us. We took care of them until their parents could make their way home. We are not the enemy. Do we have it "better" than you do? Maybe. But so do the bankers. And they don't care about your children. Focus your anger where it will do the most good--not on your children's teachers who care about your children almost as much as you do.

All you teachers do is complain. Stop complaining and start teaching!

Anonymous 1:15
All you do is imagine complaints.Stop imagining complaints and start living.

Are you serious? This blog is just one big complaint about how bad teachers have it.

I am only telling it as it is. When I see or experience injustice I will write about it. Maybe you are one of these people who doesn't like the truth about our education system. In that case you really shouldn't read my blog if it so upsets you.

The education system is broke because of the union. I think it is you that has trouble with the truth.

You are to busy protecting LIFO and your pension to realize the education system is broke. The union isn't the only cause but it is one of the major causes. Yes the mayor and administration are also large issues. I am not pro mayor or pro administration. I am just anti anyone who can't admit that the system is broken and anyone who won't help try to fix it.