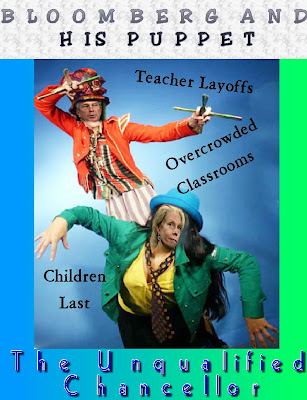 In what was an expected decision the Mayor4Life, Michael Bloomberg has fired the incompetent and unqualified Chancellor Cathie Black who lasted only three months on the job. The ex-Chancellor was so incompetent that the general public realized it by giving her a miniscule 17% approval rating. Even the despised Joel Klein had higher ratings!

Cathie Black was simply a puppet for the Mayor and everybody knew it. During her short stay four high level rats, oops I mean Deputy Chancellors have jumped the sinking Tweed ship along with almost half of the high level Administrators as the incompetent Captain Black was steering a rudderless course (good riddance). So who does the Mayor4Life appoint? A real educator? Of course not, he appointed his poodle, Deputy Mayor, Dennis Walcott to become Chancellor and yes he will also need a State waiver since he does not have an educator's license. Unbelievable, but true.

I find it very interesting that the Tweed Bureaucrats were applauding Dennis Walcott as some sort of savior, That just shows how disposed and disrespected Cathie Black was as Chancellor. She told reporters she went out and bought running shoes as if she can't get far enough away from her disastrous tenure as a Chancellor.

As for Dennis Walcott, known as the Mayor's Poodle. He told the DOE bureaucrats that he intents the follow the Bloomberg Administration's anti-teacher polices and double up on reform, whatever that means. While I see some incremental changes how Tweed works. To me it is the same old group of non-educators who's expensive programs never seem to translate into real learning in the classroom. I do see that with Dennis Walcott in charge, the Bloomberg Administration will try to rally minority politicians to end LIFO which will fail. Otherwise, it will be the same old DOE with Bloomberg's poodle, Dennis Walcott as Chancellor.
Posted by Chaz at 5:46 PM

Chaz, I think they should have named you as the Chancellor. You seem to have all the answers.

The Post now reports that Cathie Black feels that sex may have played a part in her removal. Maybe she should add her list to the women who have filed lawsuits with Bloomberg LP. Where there is smoke there is no hose in Bloombergs N.Y. Walcott will be more of a problem but some folks are falling all over themselves with his appointment. Could be as simple as Black vs Black.

Layoff notices are being printed. They are scheduled for May 2nd.

I don't believe layoff notices are being printed at all. If they are, they'll never be delivered.

I am confident that Chaz has more answers then Cathie Black, that says a lot.

If someone has been mayor for the third term and still has to read polls every week, then he is a failed one and a fake one as well.

She w3as not only incompetent, she was clueless on how the schools operate. She was out of touch and disconnected with the students and their parents and it is too bad the rest of those rats at the DOE did not leave the sinking ship called Tweed.