Mayor Bloomberg's Poodle, Chancellor Dennis Walcott, Uses His Political Connections To Get Out Of A Ticket & Put The Police Officers Jobs In Jeopody. 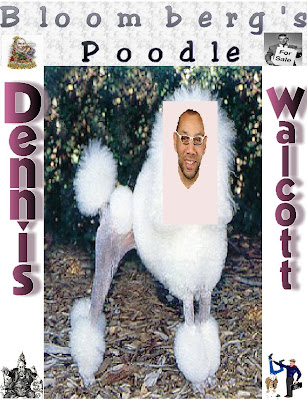 The Chancellor challenged the two police officers about stopping the car and identified himself as the Chancellor for the New York City Schools and Deputy Mayor for the last eight years. He demanded the badge numbers of the two police officers who were just doing their job in protecting the neighborhood and then the Mayor's poodle contacted the Police Commissioner, Ray Kelly, to complain about the police officers actions. How dare they stop his car and demand information? The New York Post article about the incident is Here.

In response to the Chancellor's complaint, Ray Kelly authorized an internal affairs investigation against the two police officers who told the investigators that Wallcott was being difficult during the traffic stop. They claim he said the following "you have no right to pull us over". I guess if you are the Mayor's poodle you should not be subject to the traffic laws of the City like everybody else. Therefore, the next time Dennis Walcott says he is just like everybody else, just remember how he used his power and influence to put the bite on two police officers who were just doing their job to protect the community they patrolled in.
Posted by Chaz at 11:21 AM

A regular piece of shit...

Just part of the mayor's kennel....and not one pedigree in the bunch!!! Is Walcott one of his bitches or is he just a sire?

Walcott is just a lap dog for Bloomberg and nothing will change.