The DOE Uses Abbott & Costello Math When It Comes To Headcount At The Central Bureaucracy As They Hide The 300 Million Surplus For Next Year. 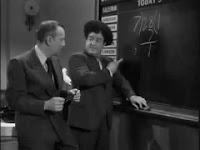 Over the years the DOE has practiced "fuzzy math" when it came to where the money goes when allocating funds. Now we find that Tweed is still practicing "fuzzy math" when it comes to next year's budget. In testimony in the New York City council the DOE had previously claimed that they cut the Central Bureaucracy down to 1600 in past budget cuts only to admit in the very same testimony they didn't do it and the Central Bureaucracy's headcount was either 2, 000 (DOE) or 2,024 (UFT) this year. Incredibly, when proposing to eliminate 6,166 teachers, the DOE projects an increase of 97 positions next year (the UFT claims the increase is 218 positions) in the Central Bureaucracy. Inside those numbers there is a projected 22.1% increase in non-educators while reducing educators by an astounding 64.1%. By contrast the DOE has eliminated over 5,000 teaching positions due to attrition and saw class sizes rise dramatically as the Central Bureaucracy failed to cut their own headcount after promising to do so

I believe UFT President, Michael Mulgrew, said it best in his testimony in front of the City Council. He was quoted as saying the following:

“I am sick of the fact that we cannot get any credible information from the DOE; I do not trust them at all….There is a tremendous political game being played; it’s so disgusting. Their facts are devoid of any facts….They are basically lying in open testimony.”

There were other funding issues that the DOE numbers don't seem to reflect reality. Moreover, the New Chancellor incorrectly stated that the Charter Schools were subject to the "fair student funding" requirements as Public Schools. If the Charter Schools were, they would receive drastically reduced funding since they take a minimal amount of "high needs students". He also stated that the elimination of the over 6,000 teaching positions will result in a class size increase of only 1 to 1.5 students when it looks like the increase will be between 3-6 students, with the greatest class size increases in the K to 2 classes. Finally, when the DOE budget showed a 300 million dollar surplus for FY 2012 and was cited why there should be no layoffs, the surplus item just disappeared from the DOE budget with no explanation what happened to the money. See the entire discussion on the New York City Public School Parents Blog. It is an eye opening experience.

I can only describe the DOE budget presentation as Abbott and Costello math where more becomes less as they try to hide their surplus and claim imaginary cuts in the already bloated Central Bureaucracy.
Posted by Chaz at 10:01 AM

Now you support Unity...Funny is n't it.

When our union and profession are under attacke by outside forces, it is logical to close ranks and speak as one.

The ed deformers would like to have a divide and conquer policy and I will not oblige them unlike those fifth columnists at E4E.

I STILL don't believe Mayor Schmuckberg will actually lay off 5,000 of his "pets."

Undo your ONLY accomplishment in your DOE criminal enterprise...You think you're poll numbers are low now...? What will you be accomplishing anyway? To blame the pain on the union? ON veteran teachers? You won't do it...but anyway...DO IT !

They are posturing, since they KEEP ON warning they are laying off teachers....for what reason do they keep repeating it? OK, we KNOW it already. You're laying off teachers. SO DO IT ALREADY . . . ! The shock and fear factor peaked a month ago. It's no longer working...s _ _ _ or get off the pot, Walcott.

Having taught in a closing school it is very sad as the final days dwindle. Also many of the newbie teachers appear to be snobish and down right unfriendly to the staff at the closing school. For this and other reasons I also believe that Bloomberg will not layoff the newbie teachers as he states. But, LIFO should remain as it is a basic civil service protection above all. If layoffs happen the new teachers will suffer as new teachers and other workers have suffered in the past. Seniority must be preserved. As for the DOE and their budget if Mulgrew did make those statements he should receive praise. But that does not mean we should not disagree with the UFT on many an issue. It should be done within ranks I agree with Chaz, not that I agree with mulgrew.

I'm a vet teacher, but interact with quite a few newbies. I've made a few calculated quips over the last month to "test the waters" as to where they stand, and although I have good working relationships with them, it's obvious where they stand-they are against the older, vet teachers, and "behind closed doors" want LIFO to end so they don't get layed off. And this is to be expected. Although I respect them, seeing this, I hope THEY go before me. So, THANKS MR. MAYOR for dividing, an turning one against the other...you must be proud of your weasly self. All of your mainipulations, in the end, only cause hate, and fear,and other bad things.