Mayor Bloomberg Names His Poodle, Dennis Walcott, As Chancellor. The Reality Is He Is "Part Of The Problem Not The Solution". 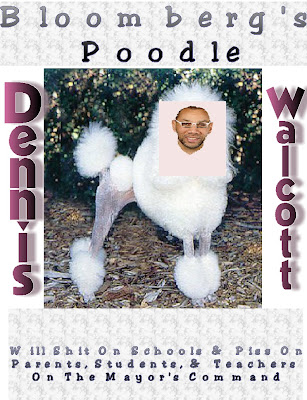 Mayor Bloomberg officially has nominated his long-term Deputy Mayor of Education, Dennis Walcott as the new Schools Chancellor. However, in his first press conference he stated that he will advance the Mayor's polices concerning the New York City Schools. The only thing that might change will be public relations. However, don't look for any policy changes from the Mayor's poodle.

Dennis Walcott has been the Mayor's point man for the last eight years when it came to education and is "part of the problem and not the solution" when it comes to the New York City Public Schools. As Deputy Mayor of education, Dennis Walcott aided and abetted the destructive policies of the DOE that included Administrative bloat, out of control computer and consultant services, and the failure to reduce the academic achievement gap for minorities and low-income children.

Let's look at what Dennis Walcott has said to the New York City Council yesterday that proves my point.

He defended the city’s policy to offer space in public school buildings to new charter schools, but acknowledged the process could be improved. He pledged to keep “the pedal to the metal” and praised the school system’s “remarkable progress” since Mayor Michael R. Bloomberg took its reins in 2002.

“I believe in what we’re doing, and I haven’t had any evidence that what we’re doing is wrong,” said Mr. Walcott, who as deputy mayor has advised Mr. Bloomberg on education matters.

He also repeated a mantra of the Bloomberg administration, that the state law protecting the most senior teachers in the event of layoffs was “one of the most crippling policies on the books.

In no case did the Mayor's poodle take issue with the Mayor's education policy. The complete New York Times article can be found here. In fact the head of the Education Committee, Robert Jackson stated the following when Walcott brought up the LIFO issue:

“You and I know the issue of LIFO is a dead issue,” said Jackson, referring to the State Assembly’s opposition. “You can beat a dead horse to the ground.”

The Mayor's poodle also had no answers when it came to the increased Administrative bloat at Tweed except to say the only significant money savings will come from laying off teachers as skeptical council members chucked at that remark. UFT President Michael Mulgrew followed Dennis Walcott's testimony and was quite forceful and is a must read here. According to the New York Times article Michael Mulgrew did and said the following:

As he testified, the teachers’ union president, Michael Mulgrew, scrawled “sick of it” on the back of a printout of his testimony. “This isn’t about the chancellor,” Mr. Mulgrew said afterward. “It’s about the policies, and they don’t seem to have changed.”

Unfortunately, I foresee no change in the destructive Bloomberg Education policy with the Mayor's poodle, Dennis Walcott at the helm and look for the same teacher-bashing issues and the questionable statistics that existed when both Joel Klien and Cathie Black were Chancellor.
Posted by Chaz at 2:10 PM

Chaz, who would you pick as Chancellor?

Oops, I forgot, Rudy Crew as my other choice.

I don't know about Rudy Crew. I worked under his regime and all I remember is he constantly reamed principals and then they came back to their schools to push us to fullfill Rudy 2's mandates. He also was super chummy with Mayor Rudy G. and they spent many a pleasant hour smoking cigars in Gracie Mansion. I always thought Rudy 2 was too distant from actual working conditions in schools.

Nice picture of the poodle. A lap dog he is.