Teacher Respect Starts At The Top. However, From President Obama and Mayor Bloomberg All We See Is Teacher Bashing. 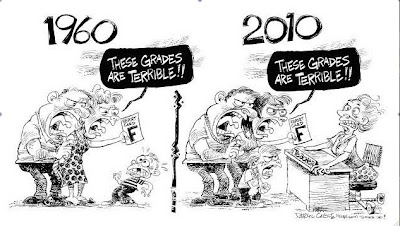 One of the reasons that teachers are being disrespected by the news media is that they take the cues from the politicians that get the most publicity and has the most power. Yes, there are the new wave Republican Governors in Wisconsin, Indiana, Ohio, and New Jersey who believe teacher bashing is some sport. However, the two leading anti-teacher politicians have to be President Obama who thought it was appropriate to fire the entire high school teaching staff because of the failure for the heavily immigrant student body to meet Rhode Island academic standards. Of course Obama ignored the fact that most of those teachers gave their sweat and blood to help these students but were stopped by lack of resources, and the social-economic community that the students came from. With the President bashing teachers, it became open season for those education deformers to attack teachers and their "due process rights". To most people if the President blames the teachers for the student shortcomings it must be true.

That brings me to the Emperor, Mayor4Life Michael Bloomberg who has taken "teacher bashing" to a new low. Over 80% of his proposed layoffs are teachers while he ignores a 10% increase in the DOE Central Bureaucracy. The Mayor not only wants to layoff teachers wholesale but proposed the elimination of teacher seniority based layoffs known as "last in, first out" or LIFO. The Bloomberg Bill to end LIFO was a transparent attempt to get rid of highly paid senior teachers and replace them with inexpensive and unvested "newbie teachers" in his "education on the cheap" policy. Day in and day out the Mayor grips about LIFO and has Fox News as well as the New York Daily News and the New York Post almost daily lobby for the end of LIFO. Even Newsday was on board but only if it was implemented Statewide. The Mayor even paid for million dollar commercials to press his case against LIFO and has so far failed miserably when the Governor and Assembly refused to allow Bloomberg's Bill to see the light of the day. In fact, Bloomberg's attack on teachers has backfired with historically low approval ratings of 40%. Now he has fired his incompetent Chancellor and put his poodle in charge who stated that he will be champion the same old failed Bloomberg reform policies that have alienated parents, students, and teachers alike.

However, the damage is done. Parents talk disrespectfully of the schools based upon politician actions and the mass media. Their children then tap into their parent's feelings and many students no longer give the teacher the respect he or she deserves. Ask students how they feel about their individual teacher and they will tell you that their teacher is "great" but if you ask them about teachers in general, a different answer appears. These students will tell you that many teachers don't care or are disinterested in the students. Where did that feeling come from? I just said that most students respect their teachers, it is the others that the students complain about. The answer is quite simple it is what they hear and read which is an unrelenting stream of teacher bashing and as Nazi propagandist Joseph Goebbles once said "if you repeat a lie often enough it becomes the truth".

We need to make a concerted effort to show that teacher respect is positively correlated with student academic achievement. The only chance to narrow the student academic achievement gap is to give back the respect teachers once enjoyed, until the politicians decided that the teachers were the blame for the nation's financial and educational woes. They make excellent scapegoats in a nation in crises.
Posted by Chaz at 7:06 PM

This is a response to the previous article responses.

Teachers go to school for 4 years plus they get a 30 Credit Masters and than take 30 credits of additional “courses”. This would equal one standard masters expect that many of the additional 30 credits are BS. I have friends that are teachers and they tell me how bogus many of these classes are. Some are ligament but most are not graduate level classes.

I have a MBA (66 credits at my program) and work a full year, so please do start comparing education levels. And NO I do not make that much more than teachers. I earn slightly more than a city teacher but significantly less than most Westchester & Long Island teachers.

I don't have a pension and I don't have tenure.I have a MS just like you.Why should I pay for you to have these benefits?
Most teachers in NYC are average. New blood is needed and that is why LIFO needs to end

Then why didn't you become a teacher? You non teachers think it is an easy job because you have never been in a classroom dealing with up to 160 students.

We gave up significant pay raises in the last two decades for a decent pension which I may not fully enjoy. I would gladly exchange my pension enhancements for the salary I should have had.

Hey, sour grapes people...if teaching is such a fluffy job, why is the "dropout rate", those leaving the profession within three years so high? At least, previous to this horrible recession, 60% of teachers LEFT THE PROFESSION before three years. They didn't even stick around for these cushy benefits. THAT tells me that not too long ago, they got a better deal in your depressed "private industry." Is it OUR problem now that YOUR life sucks, or you don't have a pension? Private business people like you earned higher salaries for decades, while teachers were getting zero raises for quite awhile. So , Pleeeeaaase with the violin playing. If teaching was so good, why didn't you become one, Mr. MBA? If you're even on the level, sorry your a loser, cookie cutter MBA....but not my problem. Loser MBA, sorry you're too stupid NOT to play into the class warfare scenario that your corporate Masters are brainwashing you into...pointing your finger at anyone who works for a municipality...WE are the evil ones....get a life dummy...Again...NOT my problem that you're not a teacher...we have it so good...

To the MBA guy...if you've been in the work force for 10 years previous to the recession, and you're not making much more than a teacher...than you're a LOSER. You should have done way better than that. There are losers in all professions...including "private industry." So what, teachers are to blame for all of America's ills, AND ALSO for loser MBA's? I should pay for YOUR failures in life? The teacher bashing now is at the laughable level...

The problem with teachers is that you complain how bad you have it. No one said teachers have it easy but teachers complain as if teaching is the hardest job in the world. Stop complaining and you will get a lot more respect.

How's that "Hope and Change" thing working out for those of you that voted for this current President, in light of how President Obama and Arne Duncan applauded the firing of the Central Falls teachers?

Yet, the President has called for people to join the teaching profession. Does anyone here see the contradiction between what the President says and what his actions are?

For the record- didn't vote for either Barack Obama or John McCain. Didn't see much of a choice here.