Chancellor Dennis Walcott Claims He Will Investigate Allegations Of Cheating And Take Action. Seeing Is Believing. 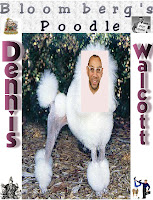 Chancellor Dennis Walcott, the Mayor's poodle claims that he will take seriously and pursue allegations of cheating in the New York City School System. Dennis Walcott's response was based upon the New York Post's Michael Goodwin who wrote about the overwhelming letters and e-mails he received about how principals pressured teachers into giving undeserving students passing grades so not to embarrass the school and give the principals their bonus for bogus results. While I believe that Dennis Walcott might be sincere about investigating wrongdoing by school administrators, I also believe the people at Tweed will follow their "business as usual" approach and ignore or quietly bury this issue and few, if any, principals will be disciplined.

By falsely promoting students, these educators truly are hurting the students since they will not receive much-needed resources that would help them in the long-term if they were retained. Instead, they are advanced into a more academically demanding environment that is beyond their coping skills. The result would be a greater dropout rate in high school and less of a chance to be a work-ready adult.

While the cheating scandal at Atlanta is going to make it more difficult for principals to blatantly change answers to mandated State tests since it could potentially cost them their positions, the principals will use more sneaky and sinister ways to advance students who are undeserving of promotion. The question will be how will Dennis Walcott try to combat these principals when teachers expose their cheating practices? Will he establish an independent task force, answerable only to the Chancellor, like the NYPD's "internal affairs unit" or rely on the existing investigative agencies like OSI who is subject to Tweed's direction and practices a double standard between administrators and teachers in their investigative process? Such questions need to be answered. It is one thing to "talk the talk", it is another thing entirely to actually "walk the walk" and take real action against school cheating.

Will Dennis Walcott do what was done in Baltimore, or do what they did in Atlanta and Washington D.C.? Only time will tell. I, for one is not optimistic, unless the Mayor tells the Chancellor that is what he wants done. If you have a story about cheating in your school e-mail it to the Chancellor at DMWalcott@schools.nyc.gov.

Update: The Federal Department of Education have sent investigators to determine the scope of cheating at Washington D.C. Schools under ex-Chancellor Michelle Rhee. Educational miracle? How about education fraud!
Posted by Chaz at 8:00 AM

Wow! You are right about real cheating but chaz's article does bring up the question about the disservice we are doing to children who should have received extra resources rather than being pushed along and unable to function as an adult. This has a real effect on our workforce.

In too many schools administrators and teachers are pressured to show good results and cheating becomes a way to a means to achieve the desired result.

I agree with chaz that nothing will be done unless Mayor Bloomberg demands that Administrative heads need to roll.

The answer can be seen by the recent court cases involving the Deutsche Bank tragedy. While not the same magnitude as the tragic deaths of the 2 fireman, Bloomberg will always side with management especially with his legacy on the line the remaining 2 plus years of his mayoral control. My bet, all talk no action.

You wouldn't have a job if the Fed wasn't printing those trillons. You should take a course in economics to better understand how the economy works.

What does your comment have to do with cheating in the schools? As for who cares? The very fact that we graduate students who are not career-ready is the problem that we have in our economy.

You are the reason that an investigation needs to occur. You think giving students grades they don't deserve is ok. Just because you don't like the way the government is run is not a reason to cheat students out of the education they deserve.

OK, OK, you are all correct in a narrow sense. However, if the cheating is widespread and chronic in schools around the country, then the primary fault does not rest at the bad teachers or corrupt admins, it is the policy and laws that leave no alternative but to inflate for the self survival of your jobs, bonus, promotion or whatever. With Duncan, Bloomberg, or any principal, it is either their way or highway.
Oh, please, for a long long time, the only people move up, or get rich are the poeple who know how to inflate, so call to create extra value like giving a kid a few extra points.

NO one can cheat your own future when you do cheat yourself. I am tired of hearing "world class education" in DC, Baltimore, Newark, Paterson, and every town and every city while everyone in the system knows there are very little going on in the classroom. If you do not inflate, what do you suppose to do in raising scores year after year.
Yes, I am the problem of the cheating, but I am not anywhere near any test booklet.