Teachers, Technology, & Tweed. How Does The School System Thrive Academically With Fewer Teachers? According To Tweed It Is Simple, Add Technology. 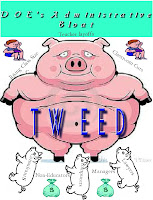 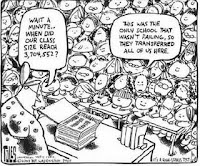 Going into the 2011-12 school year the New York City Public Schools will have nearly 8,000 fewer teachers than it had in 2007-08. With student numbers staying relatively stable, the schools have seen class sizes rise dramatically despite a lawsuit that required the State to reduce class sizes. It is expected that class size increases will be 2 to 4 additional students for the 2011-12 school year. The result will only weaken any academic progress by the students who most need individual attention that comes with lower class sizes.

By contrast, the headcount at Tweed has been increasing and even when they promised to reduce the Central Bureaucracy, Tweed failed to do so. In fact, the headcount actually rose! Now it seems Tweed has come up with a solution for having less teachers and rising class sizes, they have budgeted $900 million dollars for technology! Yes! Technology like the $79 million dollar SESIS program that is nothing but a headache to everybody who tries to access it. Or the $81 million dollar ARIS program that many schools have given up using. How about the wi-fi wiring of schools that cost millions of dollars, including $3.6 million dollar fraud by the consultant, only to be obsolete at completion. How many more millions are being spent on online credit recovery courses such as "Castle Learning" and the $120 million dollars on the expansion of the IZONE program which allows students to ignore seat time in school, while still passing and getting a bogus diploma? Yes, Tweed has decided that less teachers in a classroom and overcrowded class sizes is easily remedied by the false band-aid of technology. Remember, it is not about student academic achievement but the graduation rate, no matter how unprepared the student is for life as an adult.

Remember, in the world of the DOE it is Tweed and their technology consultant services first and children last!
Posted by Chaz at 9:15 AM

IF ANYONE IS INTERESTED, I RECEIVED THE FOLLOWING EMAIL IN RESPONSE TO MY HAVING LEFT A COMMENT FOR THAT DAILY NEWS STORY:

I saw your comment on my story about Flushing High School and am interested to hear more about what your school does if you’re willing to talk with me. (I can keep your name out of it entirely, though I, of course, don’t know anything about you at this point.) I understand quite a few schools have the same or similar grading systems to what Flushing put in place this spring. What exactly have been the rules at your school? How do the students you know failed end up passing? Do you know how it happens?

Please email me back or feel free to give me a call when you have a moment to talk more.

It will be interesting to see what happens in September with the new ATR rules. I know that many schools have been using ATRs to fill non-posted vacancies (without appointing them to they remain free to the building). I was one of them this past year. Now that the schools (supposedly) will not be able to do that, it may be interesting to watch the shenanigans that administrators come up with to fill the holes. Fifty in a class, anyone?

Technology has brought this world to what it is today, technology may one day turn out to be the biggest curse we have ever known. There is no free lunch, and the free lunch kills.

The reliance on technology is what chaz has said, a band-aid that hides the academic flaws in a student's life and does not cure the disease of ineptitude.

Computer has been replacing workers everywhere you look in an increasing quick pace, why not teachers? It is just a matte of short time for education to be an automated or semi-automated process with fewer and feweer teachers. Word processing never completely replaces many unique qualities of handwriting, but over 90% of writing are now done on computers rather than being manually written. Teachers just like handwriting have their place but much reduced one.

It's as simple as that.