The "U" Rating Appeal Is Just A Joke And Even The Union Knows It. 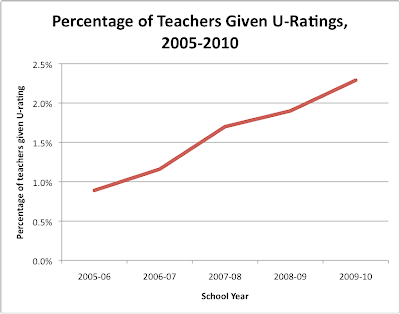 I occasionally browse through the "Unity" blog called Edwize and read all about some "newbie teacher" who describes his or her trials and tribulations when dealing with administrators, parents, and students. Of course there are the regulars who worry about Puerto Rico, Darfur, and Mexico rather than local issues. However, once in a while one of these Edwize contributors will write an article that has real significance to the readers. One such occurrence has happened in Leo Casey's very good rebuttal to the Joel Klein propaganda piece in the Atlantic Magazine.

Leo Casey wrote a very good, if late, rebuttal to Joel Klein's faulty analysis of his warped tenure as Chancellor of the New York City schools. Of course, I did such a rebuttal almost two months earlier and can be found here. However, it still does not take away from Leo Casey's excellent rebuttal article and is a must read here. Buried in Leo Casey's brilliant analysis was a statistic that was downright mind-blowing. Leo Casey said the following about the DOE's "U" rating appeals process.


"The result is a ‘rubber stamp’ of whatever the principal wants: in the over 1300 ‘U’ rating appeals that have been heard by the Department of Education over the last two school years, exactly 3 cases have had that rating overturned".

My advise for all of you who receive a "U" rating? Don't waste your time and effort for a 0.2% chance of having it reversed. Even the union knows this is true.
Posted by Chaz at 6:51 PM

If anyone has received a U rating or tenure denial and discontinuance, please contact me at TracieGG@gmail.com.

All information will be kept confidential. Thanks.

I'm not sure even Casey Anthony could have gotten out of a U rating.

Are you serious?? 2.5% of all teachers are given a U rating and you are complaining. That means 97.5% teachers are satisfactory or better. There is no way that 97.5% of teacher are satisfactory or better. Forget about teachers, take a look at any organization, public or private, 97.5% of employees are meeting expectations. You are lying to yourself if you think any organization with more than 20 people have every employee meeting expectations.

Once again, Chaz, you did well exposing this dirty little secret however, your conclusion, not fight U ratings, is wrong. I have found U rating appeals to be very helpful in 3020a hearings and have even heard, on more than one occassion an arbitrator take the non-appeal as a tacit admission of the merits of the U rating. While the obstacles may be high it still merits a fight....especially when the U is baseless.

I see your point. I never thought of it as part of the 3020-a process and yes I can see how an Arbitrator could assume a non challenge of a "U" rating as an admission of guilt.

Chaz I disagree members must file a U rating appeal. Even if the chances are slim to none, if they do not appeal they may have forfeited their right to proceed to an Article 78. Or it may prohibit their ability to have outside legal representation to file an appeal for an article 78 for arbitrary and capricious action by the employer.

Are all teachers in NYC satisfactory or better?

Good luck on an Article 78. I know of no one who won one.

Chaz I won one for a U rating given to me in 2005. It took more than 2 years but the U was over turned and I was made whole. In fact I won summer back pay as the UFT filed once the U was removed.

Was it a "U' rating appeal or an Article 78 appeal?

There is a great way to challenge U-ratings that were based on "unsatisfactory" observation reports.

A certain judicial decision has to be cited as part of the challenge.

who is Betsey and hoe can i reach her? R

I had my one and only u rating overturned this year. the ASSistant principal who wrote it never bothered showing for the hearing. I will bet my pathetic salary that she is still writing observations! SCARY!

It's still not a waste of time to go through the sham hearing because when you
"exhaust your remedies" you can then file an Article 78 case. That requires
exhausting your remedies. So, it enables you to take to to the NY State Supreme
Court.