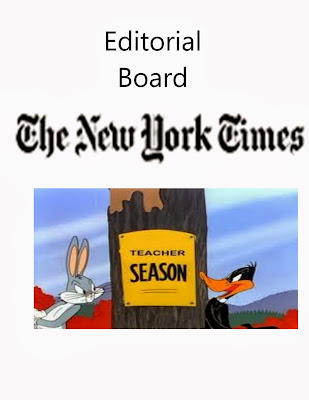 On Sunday I picked up the overpriced Sunday New York Times from my neighbor's stoop and read the Editorial Board's opinion page about how Mayor elect Bill de Blasio should negotiate with the teachers union on a new contract with retroactive raises.  I couldn't believe what I was reading.  At first I thought "did those anti-teacher New York Post and Daily News Editorial Boards hijack the Times"? Then it came to me the Times Editorial Board was really a puppet and was airing Mayor Bloomberg's looney ideas on how to destroy the teaching profession and the union that represents them.  Let's look at what the opinion piece said and what's wrong with it.

Fist, the Times article recommends that the new contract should eliminate seniority rights for both raises and salary steps and don't forget layoffs.  According to the Times Editorial, "newbie teachers" who are "highly effective" should get "merit pay" and kept if layoffs occur.  while experienced teachers should not be increasingly compensated for time in the system and should not result in raises in their salary.  Moreover, advanced degrees and increasing education credits should not come with pay raises and salary steps.  On the other hand, the article wants to pay starting teachers a higher salary to keep them in the system. That's the reason that 50% leave the profession.  How about the hostile environment, lack of support, or that teaching is just a stop on the road to a real job as the real reasons for abandoning teaching.  I smell a whiff of E4E here.

Second, the Editorial Board wants to give a time limit to those "inactive teachers" (ATRs).  Notice they make it sound like ATRs do nothing but sit all day and read a book.  They ignore the fact that the ATRs are in the classroom all day as provisionals, leave replacements, and covering classes for absent teachers but that doesn't seem to count.  The article also makes it sound like the ATRs don't want a job when the truth is that the ATRs do want a permanent position but are discriminated against by principals because of their age and salary and the ones that do get a job are usually younger with less than ten years in the system.  How convenient that they ignore that fact that principals are encouraged to hire the "cheapest" and not the "best" teachers..

Third, the article uses the Bloomberg/Tweed idea of terminating teachers for alleged misconduct, if substantiated by an investigator.  In other words, the Times Editorial Board wants to eliminate teacher "due process rights" by making some alleged misconduct automatically a termination offense, despite the very real possibility that the teacher is actually innocent of the allegations.  No need for evidence or an independent Arbitrator to weigh the evidence, if an investigator believes it happened, despite no evidence showing it did, its good enough for the Editorial Board.  "What country do they live in"?  The Soviet Union?  Maybe the Times Editorial Board works for "Pravda"?

Fourth, those clueless non-educators want teacher work rules loosened by adding more time, teacher parent conferences, and more classroom instruction that occur in those thriving charter schools.  What's left unsaid is the extremely high teacher turnover rate, relentless test preparation at the expense of real learning, and the stringent discipline procedures that result in many "high needs" students to be excluded or expelled from those schools. However, I guess that doesn't count to the Times.

Finally, the article fails to point out the "City pattern" was set for the two 4% raises for fiscal  2009-10 and they included no "givebacks".  Since the  beginning of collective bargaining in  the 70's one a "pattern is set", all unions get the same or very similar pattern.  Its no different now and just because the Mayor rather use the money for other purposes does not make it right.  Yet, the Editorial Board fails to address this issue as if it doesn't exist.

The Times Editorial Board's opinion piece is, as my independent Arbitrator said when he threw out a letter to my file as "unfair and inaccurate" when it comes to the truth  Shame on them for their trash article.

I must say if Mayor Bloomberg admitted he influenced the Times Editorial I, for one, would not be surprised. What shocked me was how low the Times Editorial Board would take the DOE supplied information without a real "fact checking" process and then stoop so low as to trash NYC teachers and their union while getting the issues all wrong in the process.

I always we had one objective newspaper in NYC until I read that article. It's one thing to voice an opinion, but for the Times to base that opinion from lies fed to it by the DOE and not check the facts is reminiscent of its writer who made up stories and published them as fact. I would have thought that lesson would have been learned. Needless to say I will be donating all my future NY Times to the ASPCA to do with as they see fit.

Of course he did. It will get worse over the next three weeks, too.

Anybody know what the timeline is looking like right now with the non-binding arbitration for our contract?

I just posted this on Gotham as well. I have been a home delivery subscriber to the Times for 25 years. Today it almost lost me as a customer. I was aghast at what I read - my mouth dropped wide open - I honestly had to think for a minute to wonder if today is April Fool's Day. The Editorial Board got it all wrong - I feel betrayed and I hope the Board gets an earful from other likeminded people.

There are so many things just flat out WRONG in this article that I couldn't believe I was actually reading it. Not just ignorant opinions, but WRONG.

1. "Similarly, the salary schedule in New York is calculated to reward longevity, requiring 22 years to get to the top level. Teachers are also rewarded for work toward advanced degrees, but this coursework does not necessarily have any bearing on how poorly or well they teach."

Teachers are REQUIRED to complete a masters in education. It makes it sound as if teachers are fiddling with extra coursework just to earn a salary step. Teachers MUST complete the coursework in order to retain a teaching license. If they do not they cannot teach ANYWHERE.

2. "Teachers who do not find positions, however, are placed in a costly reserve pool. They work as substitutes and are paid full salaries at an annual cost, according to city data, of $144 million a year. Many of them do not even seek permanent jobs, the city says."

ANY teacher at ANY time during the school year can become an ATR. ATR's are not "subs," they are fully licensed teachers whose positions have been eliminated due to budget cuts or drops in enrollment. Many of them are picked up as full-time teachers for the school year, where they are expected to have all the responsibilities as an appointed teacher. They are not "inactive."

3. "Increasingly, school systems like those in Chicago and Washington, D.C., remove inactive teachers who do not find jobs in the system within a prescribed period, through layoffs, unpaid leaves, early retirement or buyouts. Similar arrangements should be worked out in New York City."

D.C. and Chicago have one of the worst models for teacher retention and union relations. Chicago's teachers had a strike recently, in D.C. 41% of children now attend charter schools. In other words, these are two cities where the public school system is practically destroyed.

4. "Moreover, there should be a clear list of offenses that, if substantiated, lead to termination. Under current rules, official investigations that uncover serious abuses like sexual misconduct are subject to review by arbitrators who can veto terminations in favor of lesser penalties."

There is a clear list of penalties that if substantiated, lead to termination. The arbitrators "veto termination" if the "substantiated offenses" are not fireable offenses. Just because a principal alleges something doesn't mean it's true.

5. "The teachers’ union has been particularly hostile to the city’s thriving charter schools, which receive public financing, are exempt from some state rules and regulations, and, on average, are outperforming traditional schools."

CHARTER SCHOOLS ARE NOT PUBLIC SCHOOLS. They receive private funding from businesses and the private sector. That is where they receive most of their funding. Charter schools can and have been closed at any time if funds dry up.

As to whether charter schools "outperform" traditional schools many studies have shown that actually, on average, they do not.

This despite charter schools having the authority to expel poorly behaved children or children whose parents are not involved in their childrens' education.

The level of ignorance in this editorial was astonishing, and they also closed comments after a short period.

Maybe, just maybe, the editorial was printed to deflect from Mayor Bloomking's extended golf game on the greens in Bermuda while there was a terrible accident in his jurisdiction. No matter, just call 311 to find out if your loved one survived the catastrophe.

Of course he did! The $$ 1% stick together. Next we will get slammed by the Post and the Daily News.

Bloomberg got the call about the train disaster but opted to play golf instead cause the truth about this piece of **** is that he does not care about people he only pretends that he cares about people. It could very well be that this NYT editorial was written to deflect mikeys mess up. What a world we live in people huh, its all about bull crap

The New York Times by writing this article proved to me that anyone will sell out their sole and integrity for money, yes money the root to all evil. The fact that the times wrote this biased article is an indication to all new yorkers that money can buy just about anything..even the "paper of record" prints garbage that is HARDLY the "record" because they choose to bypass the record for the money. I just canceled my subscription to the times

Why are we not expressing ourselves about the next chancellor? Please support the movement to have Dr. Marc Epstein named to this important position. Chaz help promote Epstein!! He is far and away brighter then any of the other pretenders being spoken about. http://petitons.moveon.org/sign/petiton-for-nyc-chancellor