The Real Legacy Of Chancellor Dennis Walcott. A Legacy Of Failure. 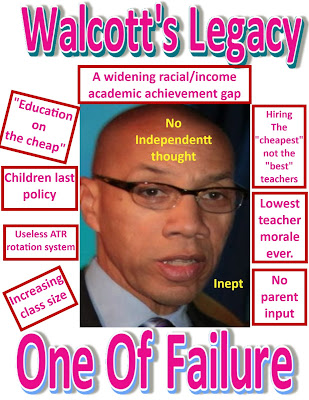 Quality Teachers:  Under Chancellor Dennis Walcott, school principals found themselves forced to hire the "cheapest" and not the "best" teachers for their students.  His insistence that teacher salaries come out of the school budget hurts the schools and the students.  While schools are forced to hire inexperienced "newbies" who may never make it as a teacher and in the process makes those students "guinea pigs" to untested teachers,  the ever increasing ATR pool is populated with many highly experienced "quality teachers" who are nothing more than act as a  "babysitter" as they rotate weekly to different schools.

Class Sizes:  In the three years that Dennis Walcott has been Chancellor, class sizes have increased every year.  Worse yet, the greatest increases are occurring in the lower grades where class size is of most importance. It's unforgivable that our youngest students are subject to the ever increasing class sizes that interfere with real academic achievement. 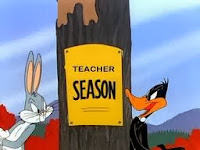 Staff Morale:  There is little doubt that under the tenure of Dennis Walcott, teacher morale continued to deteriorate.  Lack of a contract. additional paperwork, his "blame the teacher" philosophy, and increased pressure from Tweed on schools have worsened the classroom environment and made it more hostile.  His support of the teacher evaluation system and the punitive aspects of the Danielson framework known as a "gotcha system" to terminate as many teachers as possible and making it a living hell for the classroom teacher.  Its little wonder his approval ratings is in Cathie Black territory.

Lack of Parent Input:  When Dennis Walcott took the job as Chancellor, he claimed that he will bring parent input into the process.  However, he failed to live up to his promise and parents have felt alienated and left outside the loop.  His attempt to use parent coordinators to lobby for the Mayor's LIFO bill was an example how he wanted to use parents rather than listen to them. 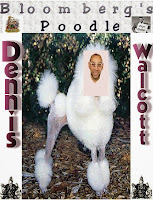 Lack of Independence:  One of the most obvious outcomes of his tenure was his lack of independent thought or deed.  He simply was the "yes man" for the Mayor.  Or as I have said many times the "Mayor's poodle".  Even when he proposed some initiatives such as agreeing to a teacher evaluation system and an ATR buyout offer,  once the Mayor showed disapproval, they disappeared.  His unquestioned support of anything Mayor Bloomberg proposed made him untrustworthy in the eyes of educators and politicians throughout the school system and even the City Council wanted him to go to jail and required him to take an oath before he testified, a highly unusual and insulting request.

The bottom line is that under Chancellor Dennis Walcott's tenure he has practiced "education on the cheap" and "children last" policies that has hurt the very students he pledged to protect and continue the destruction of neighborhood schools while throwing more money to charter schools. Worse, his lack of independent thought or deed and his unquestioning of support on whatever the Mayor decrees is not what a Chancellor should be. His failure to work with both the UFT and CSA during his tenure was highly disappointing.  If I was to give the Chancellor a grade it would be a big fat. "F"

Good riddance Walcott and Bloomberg. The damage the both of you have done will take years to repair, if ever. I was a happy, highly effective teacher for 23 years. Now I rotate weekly as an ATR. I cant go into all the assaults on my dignity as a person or as a professional. Just yesterday I was placed in self contained special ed classes again. Every major problem I've had are in those classes.( I'm a regular ed teacher.) Recently at a decent Bronx HS I was in one such class, and a large African American boy kept saying he wanted a good looking sister to f**k. I asked him what he wanted to be when he grows up and he said rape white women. I finally got him removed and the other started in - an effimate male student asking if I found him attractive, do I hate black people, etc. ( I'm a straight white male .) Many ATRs are being placed in these classes because their newbie staff is refusing to cover them! So yesterday I refused. I explained these are district 75 classes. The teacher in those classes must be highly trained and licensed something I'm not.
The AP agreed! If Walcott and Bloomberg really cared about educating kids there would be no unlicensed, inexperienced teachers teaching any classes.

Walcott is such a disgusting turd, He and Bloomberg have destroyed the city schools and every teacher that I know wants out ASAP because of the mess that the DOE has created. He needs to go crawl into a hole and hang his head in shame. He is so out of touch - he lives in a fantasy world if he thinks anyone is going to congratulate him or miss him because in reality no one respects him and everyone hates him with a passion. He should be in charge of cockroaches not education. good riddance.

Another insightful article and so very true.

We all know that Walcott was simply the Mayor's puppet and did what was best for the Mayor and not for the students.

I hope he leaves quietly and doesn't show up in some ed deformer group but I wouldn't count on that happening.

You forgot to mention that he looks like a goldfish; in fact, that's my nickname for him: The Goldfish. His mouth is always open in a big "O", in every photo I've ever seen of him, just like a goldfish's mouth. On a "scale" of 1-10, I'd rate him a zero.

Are we within our rights to refuse a self contained class? I agree that they are the absolute worst and dangerous. Many of the student are high emotionally disturbed and we don't know them.

Shouldn't a sub in a self contained class be given a copy of the kids' IEPS?

Also, what if the child had some disorder such as epilepsy. That should be something a sub should know about.