How Mayor Bloomberg, "The Grinch", Stole Christmas From Municipal Workers. 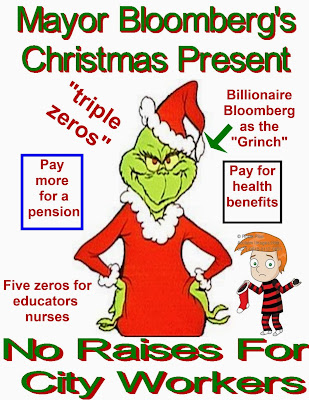 We all know the story about the "Grinch".  Yes, that evil thing that wanted to destroy Christmas and the holiday spirit but failed.  Now municipal workers have one more holiday season to suffer through with their own "Grinch",  Mayor Michael Bloomberg.  While the Mayor continues with his "legacy tour" on how he remade the City and how great he is, the collateral damage he has left behind is very evident.

He has left a "tale of two cities" where the rich thrived while poverty increased.  Where Manhattan and parts of Brooklyn became attractive economic engines of change while the outer boroughs, especially the Bronx, were left behind.  As for the schools? His educational legacy turns out to be all "smoke and mirrors". In his twelve years under his direction, the schools have shown little or no improvement.

However, the greatest injustice by Mayor Bloomberg is how he treated the municipal employees when it came to negotiating "fair contracts".  Even when he agreed to a "City pattern", he felt free to ignore it when he saw fit.  Therefore, educators and nurses were screwed out of two 4% raises that all other unions received. His disdain for the municipal workers would show up time and again.  Now he decided that the next budget should include a five year contract patterned on New York State's 2011 agreement with their unions during the recession which included "triple zeros" and 2% raises in the last two years.  Except, according to the Mayor, it should be 1.25% for the last two years.  In addition, any pay raise would have to be offset by employee payments into their health and pension plans. The result, is that as the City reports at least a 4.3 billion dollar surplus for the next two years, he treats the municipal unions like the City is in a recession.

For the Mayor it has always been a "tale of two cities" "the haves and have not".  For the municipal workers, they are part of the "have not". Yes,, for us Mayor Bloomberg is certainly the "Grinch".
Posted by Chaz at 9:08 AM

Hi Chaz,
Wanted to let you and fellow ATRs know about a nasty little game being played on those of us who stand up for our rights. If you call in sick at a school where you refused an assignment the schools report it as an unauthorized absence and dock you a day's pay. If you don't check your CAR balance you might not pick up on it. There is no notification; the school and it's administration say nothing. This has happened to me personally and 3 other atr friends at different Bronx high schools. All cases preceded an altercation with a payroll secretary and/or administrator over refusing an assignment. We all had to get phone records to prove we called the school. If your an atr check your CAR periodically. I'm going to start emailing the principal and calling next time I'm sick.

chaz, how true and thank goodness he's gone when we get back.

3 zeros is the state pattern and 4 zeros is the federal pattern. Wake up folks.Those are with Democrat executives.It isn't just Bloomberg.