Why The De Blasio Administration Can Afford To Give The Unions Retroactive Raises. 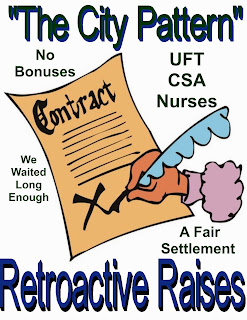 As predicted ( I wrote about it last week), the Independent Budget Office (IBO) has revised the New York City financial budget and found that this year's budget will result in a 2.4 billion dollar surplus.  Using reasonable projections for the 2014-15 fiscal year, they anticipate a 1.9 billion dollar surplus.  Since the IBO is known to be very conservative in their projections, as required by the legacy of the 1970s near bankruptcy of the City, its probable that the two year surplus are even larger. With an ever improving national economy, meaning more economic growth for the City and a rising stock market, its generally agreed that the recession and its negative effects are receding and that the City can expect larger surpluses than predicted.

That brings me to the eventual contracts with the municipal unions.  Depending on what organization and their political affiliation, the municipal contracts, including full retroactive raises, will range from 4 to 8 billion dollars.  On the low end, that would eat up the two year projected surpluses and on the high end it causes a real problem.  If we look at what it will cost the City, it appears that for all unions, assuming a 1% retroactive raise for the 2011-12 and 2012-13 fiscal years, it will cost the City approximately 1.85 billion dollars.  Well within this year's and next year's projected surplus.  However, that does not include the "City Pattern" that almost everybody agrees will be the result of the Nurses binding arbitration and the teachers non-binding arbitration awards.  How can the City pay for it?

According to the City Controller's report, the City will take a big hit and its estimated that it will cost the City 3.5 billion dollars and another 900 million dollars for the next year.  That part of the report is below.

The labor contracts for the United Federation of Teachers (UFT) and the Council of School Supervisors and Administrators (CSA) are one round behind the contracts of the City’s other municipal unions. The City and the unions were unable to reach an agreement in the 2008 – 2010 round after the City proposed a settlement with no wage increases. The other municipal unions had settled for a two-year contract with 4.0 percent increases in the beginning of the first and second year of the contract. The New York State Public Employment Relations Board (PERB) is in the final stage of a fact finding process that was initiated to resolve the deadlock between the UFT and the City.

PERB will shortly hold a final hearing on wage increases for UFT members and then issue a report detailing recommendations for a contract resolution. While PERB recommendations are not binding they have served as a framework for final labor contracts with the UFT in the past. A recommendation patterned after the labor agreements of the other municipal unions will cost the City approximately $3.495 billion in FY 2014, including retroactive cost, and $900 million annually beginning in FY 2015.

Obviously, the City could not afford this hit on their next budget alone but it could lessen the hit by extending the payment of the retroactive raises for three years.  This would allow the City to reduce the burden and fit into their ever improving budget.  Furthermore, what's forgotten is that the UFT agreed to give up 0.58% to get back the two days before Labor Day and that needs to be factored in.  Finally, the DOE budget is bloated or you can read what a Tweed insider said about the bloat and the savings from their 25 billion dollar budget can be used both for teacher salaries and direct classroom resources.

Finally, the City's proposed contract, based upon the 2011 New York State agreement with their unions is "apples and oranges".  New York State was in worse financial shape than the City and since that time, the recession fears have all but disappeared and the economy is on the upswing.  For the municipal unions to agree to a "triple zero approach" in a five year contract is not applicable in 2014.  While, I understand that the damage done in the Bloomberg last term that resulted in all unions having lapsed contracts, the members should not be punished any more by accepting inferior contract settlements.  Granted, the City and the unions will need to be creative and the contract raises may have to be stretched out, but bonuses instead of retroactive raises and "zeros" should not be an option.

Here's an idea- get rid of all the unlicensed, inexperienced, untenured individuals who were hired to replace seasoned professionals who are now babysitting. That should allow a comfortable raise and a little justice.

I hope you are right.

I got a bar mitzvah to pay for next September and I need that retroactive pay. As of now the luncheon will be just dairy. Any idea how difficult it'll be to make 13 year olds eat pickled herring in cream sauce?

How can contracts that will be based on the last pattern set up a new pattern?

Three zeros for sure. Prez Hope and Change Obama just gave 1% to postal workers after 4 zeros. It is naive to think state and federal patterns won't impact us in NYC. City always finds a way to cry poverty and unions roll over as long as leadership gets a cut.