Is The UFT Going To Sell Us Out On Retroactive Raises? 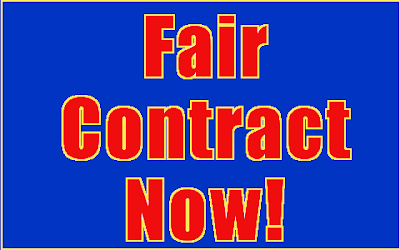 I am very disturbed by the Reuters article published by the ICEUFT blog that the union is trying to convince the State that bonuses negotiated in a contract can be stretched over multiple years.  The Bloomberg Administration takes the opposite view that all bonuses must be "booked" in the year the contract is negotiated in and must be included in that year's budget, making full retroactive raises a dead issue.  While at first glance, the union's position appears most reasonable since it allows for a flexible approach to finalizing a long-delayed contract.  However, I then recalled an article by long-term union member and close friend to the leadership,  the retired Peter Goodman in his "Ed the Apple" blog that actually mentioned bonuses as an alternative to retroactive raises.  Is there a connection and that the union is negotiating for a bonus rather than retroactive raises?  The Ed the Apple article can be found Here.  In his blog Peter stated the following:

"Both the unions and the mayor want to remove a sharp thorn that will press deeply in the flesh until it is removed. How do you find a path to both a percentage increase, four years of retroactive dollars, sharply accelerating city health plan costs and the myriad details of contracts? While I have absolutely no participation in the negotiations in the past retroactive dollars were paid as “non-pensionable” cash payouts and spread out over a couple of budgets".

Furthermore, here is how Peter responded to my objections about non-pensionable raises.

Chaz, I and the other teachers at my school are confused over this idea and how it works. Is the city/UFT preposing to give a "bonus" of say 3 or 4 % over 3 years? What happens after 3 years? The salary schedule would revert back to what it is today? Is that 3 or 4% of a particular teachers salary? In other words, teachers higher up on the pay scale would see a larger "bonus" than newer teachers? Lastly, our contract has been in PERB and is set to be released in January. What if they go along with the UFT and state that we deserve a true/permanent raise along with retro pay as is the pattern bargaining that takes place in NYC? Your help and clarification would be greatly appreciated by the teachers who read this great blog.

How the bonus would work is not clear, except it looks like it will be stretched out for two or three years. I cannot even tell you if there is interest involved.

As for PERB? It will probably be the "City pattern" and if the nurses get the double 4's, it will be hard for the union to convince its members that a bonus is the best they can do.

As a retiree, I am concerned that we get blamed for selling out the rank and file. I've NEVER voted for Unity, ever, as a teacher and now a retiree. I'm closer to what MORE stands for. I actually don't think retirees should be voting on anything rank and file does, but that's the way Unity tips their scales. I don't believe that any "raises" will be retroactive; that might mean recalculating the pensions of thousands of recent retirees. This proposed bonus is such garbage, but Unity will push this crap and not give real raises to working teachers. I believe the city has money for what it wants, which does not include a better salary for teachers. The UFT is the silent partner of any Dickensian (interpret at will) offer the city makes, and will not support its members, who are paying millions a year in dues. That enables the union to support losers like Thompson and to throw good money after bad.

When a mere 20% of active UFT members bother to vote in the UFT election, is it really difficult to understand why Mulgrew doesn't take our concerns seriously? We did this to ourselves when we were too lazy to fill out the ballot and walk it to our mailbox.


I have enjoyed reading your post. It is well written. It looks like you spend a large amount of time and effort on your blog. I appreciate your effort. Please check out my site.
students buy and sell