Linking The State 2011 Contract With The Proposed Five Year City Contract Is Like Comparing "Apples To Oranges". 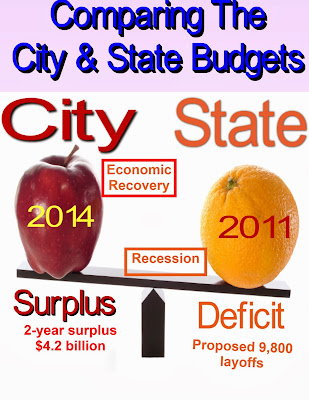 I am somewhat astounded that anybody with a bit of intelligence believes that the Bloomberg Administration's proposal that follows the pattern set by the State back in 2011 is a realistic proposal.  There are many reasons why the City's contract proposal is not an appropriate starting point for negotiations for the next five year contract.

First, let me remind the readers what the State contract with their unions ended up to be.  The five year contract gave the unions a total of 4% in raises (0,0,0,2,2) for the length of the contract.  The City decided that this pattern was still too expensive and wants to give the Municipal workers a 2.5% increase for the five years (0,0,0,1.25,1.25).  I guess it was Mayor Bloomberg's way of  "twisting the knife" by proposing such an insulting contract.  Why I believe using the State contract is not an appropriate pattern for the next City contract?  Let's do the analysis.

Economic Factors:
The economy back in 2011 was slowly crawling out of a deep recession and there were fears of a "double dip recession".  The State economy was in shambles with high unemployment and local governments laying off thousands of employees.  The State was talking about 9,800 layoffs and layoff notices were actually sent out in some cases.  Furthermore, the State cut budgets across the board and imposed a 2% property tax cap on local governments and school districts, while cutting State aid.  Under this dismal economic cloud, it was paramount for the State unions to negotiate a contract that protected its members.

State Deficit:
In 2011 there was a projected $10 billion dollar deficit.  The State responded by cutting budgets an average of 2% throughout the State and had to adjust to receiving reduced federal funding.  Combined with rising unemployment, less income and sales taxes coming in, the State was in poor financial condition.  The result was a deficit that must be closed to obtain a "balanced budget".  Therefore, the State made a compelling case to the unions that "job security" was better than laying off the members.

Union Leverage:
Even in good economic times, the State unions have little leverage when it comes to contract demands.  This is especially true when the Republicans controlled the State Senate.  Usually, the only time the State unions can obtain a generous contract is when the three political entities, the Governor,  The Assembly, and the Senate decide, for political reasons to grant one.

Now lets compare the City of New York  financial condition in 2014 with New York State of 2011 and see why its "apples and oranges", when it comes to using the New York State contract as a pattern.

Economic Factors:
The New York City economy weathered the recession quite well and entering into 2014, the City has been a magnet for economic growth and is the tourist mecca for the world.  The City coffers are full and more people are entering the workforce as the City continues to grow in population.  Furthermore, the stock market has risen over 30% and bonuses in the financial district will increase between 5%-10% this year. The economic outlook globally is expected to improve in the next couple of years, this can only further improve the City's finances since the City is one of the main areas that benefits from a rising global economy.

City Surplus::
Unlike the State, the City has a projected two year budget surplus of $4.3 billion dollars based on projections by the conservative Independent Budget Office.  This surplus is based upon the existing level of unemployment, economy, and tax base.  However, if the economy continues to improve, as it is expected to do, the City surpluses may be significantly higher than estimated.

Union Leverage:
There is little doubt that the Municipal unions have more clout than their State counterparts.  Police, Fire, Sanitation, and Teachers are an important component on how a City is evaluated by.  The support by unions can "make or break" a politician and the labor connection is an important consideration for politicians who want to succeed in office. The poor showing by the Republican Mayoral candidate Joe Lhota shows how important it is to have labor support, he had none.  Even billionaire Bloomberg needed to "buy the unions silence" by making sure they didn't oppose his third term power grab for it to succeed.

For the City to claim that the State contract with their unions is the pattern is simply "apples and oranges" and  not appropriate. The best way to start negotiations with the Municipal unions is to use the actual City inflation rate for the first four years (1% - 2.5%) of the contract  (now 2.2% for 2013) and an estimate for the last year as a starting point to establish a new "City pattern".

It's important to note that, whatever the pattern is for new contracts, the UFT is two contracts behind. By the time we catch up, whenever that is, even the new round is likely to be close to its expiration date.

Incredible how reckless and irresponsible Bloomberg, the financial genius so indispensable he needed to buy a third term, has proven to be.

What are your thoughts about Carmen Farina?

Chaz,
When are you going to do a comparison of how ridiculous it is to have 6 or 7 or 8 principals in one building? The goal was to close a large high school and replace it with several smaller ones. The progress reports are now showing after just a few years the regents scores of these new schools. The passing rates are well below 50% for most of the exams. What was the point? Why have so many principals in one bldg where the regents scores are dismal anyway? If you'd like further info, I have it.

Wow! A great post. I hope the UFT sees this.

Hi Chaz,
Check out a particularly obnoxious article in the NY Post today written by a Bloomy employee. Calls for an end to LIFO and time limit on ATRs. Today is a great day for nyc teachers -- Bloomy and his toadie Walcott are out! Happy New Year to my downtrodden brethren in the ATR pool and all those who suffered.

There's another anti-teacher article in the NY Times today.
Calls for ATRs to be bought out,laid off or terminated. The assumption is we are inferior to the newly hired Bloomy trolls and we shouldn't see the inside of a classroom.

Bloomberg's intentional irresponsibility is why there is an issue. Retroactive raises cost a lot of money because the city has to pay the back pay multiple times when it is factored into the salary for each year there is no contract. Bloomberg knew exactly what he was doing by not establishing a pattern. The comptroller's report shows exactly what the cost will be if city workers were to keep up with inflation for the current contracts and here it is:

Add UFT, CSA and the nurses' $3.5 billion from the last round to stay with the pattern and there is a real concern.

I agree with a prior post that we should be showing where there is plenty of fat in the DOE budget that can be cut easily. I'm fairly certain this is the case in other city agencies as well.

Also, there is plenty of precedent for us taking zeros in a period of economic prosperity. See 1995 (two years of zero raises) and 2005 (one zero and lots of givebacks).