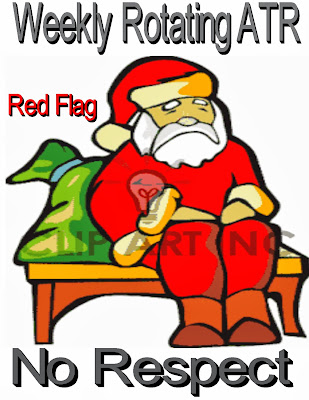 It's Christmas once again and the very best present the New York City Public School System will receive when they go back to the classroom will be that the "Grinch", Mayor Michael Bloomberg and his "poodle" Chancellor Dennis Walcott will be gone.  However, the damage they did will take nearly a decade to correct.  This article will talk about the experience Santa Claus has had as a rotating ATR in his weekly assignments.

Santa Claus has been an ATR for the last two years and because of his salary and age, cannot land a position in a school because of the "(un)fair student funding formula" and age discrimination.  Thanks to the UFT who agreed to the weekly ATR assignment travesty, poor Santa finds himself traveling from school to school in his District in a futile attempt to find a permanent position.  Previously, I chronicled Santa Claus's experience with the New York City Schools under Mayor Bloomberg.  First, how Santa Claus was subject to a biased SCI investigation and terminated in his 3020-a hearing, Here and Here. Then how he won his appeal in the courts only to find himself in the ATR pool rather than getting his position back Here.

Santa Claus is used to traveling since once a year he travels around the world giving gifts to all the children but traveling weekly from school to school in his District made little sense to him.  Each school he went to, he felt like "a stranger in a strange land". The school administration treated him with either disdain or was ignored.  The school secretary would always try to give him a "sixth period" if he didn't object or make him do hall or cafeteria duty that no other teacher did in the school.  Few schools supplied him a key to the bathroom and a place to store his stuff.  Most times the Chapter Leader never sought him out and in some schools there was no Chapter Leader.

Santa Claus also found that when he asked if there was parking for his sled, he was told that "ATRs cannot park in the schoolyard or garage like our teachers".  One week Santa showed up to a "D" rated school which needed a Social Studies teacher with knowledge of Geography and Global History.  "What a stroke of luck", Santa Claus was perfect for the job.  However, when he met with the Principal, the Principal told him that he had a  red flag on his file and that his CFN told the school not to hire anybody that had a substantiated investigation.  However, the Principal admitted to him that it would have been difficult to hire him because his CFN wanted him to hire new teachers who were 21st century thinkers and he didn't fit into that world.  Santa instantly knew that the Principal really meant that the schools can only hire the "cheapest teachers" under the "(un)fair student funding formula".

Santa Claus is hopeful that under the de Blasio Administration, he will be able to land a permanent teaching position and help his students in understanding the world instead of being treated as a substitute teacher and disrespected by the school administration. Maybe it really will be "children first".

Hi Chaz,
Your blog has been invaluable to me, thank you. Just wanted to give my fellow lion tamers a list of the worst hellholes in the Bronx. These schools will violate your rights as a human being and a teacher : 1. Wings Acedemy( take the week off), 2.Pantoja academy,Stevenson campus (students out of control and you'll get 7 periods, lunch room duty and will be asked to mop the staff room).3. Bronx studio on Simpson Street( out of control students, totally novice staff, totally insecure inexperienced ap who must show her authority), 4. Violin and Dance(better known as Violence and Romance).

I like your Santa Claus posts. I guess it sums up what an ATR goes through from reassignment to weekly rotations.

I'm sorry but I have to come to the defense of my CL union brothers at Wings and Pantoja.

First, the CL at wings is very strong and is the best CL that the school has ever had. The prior CL did nothing for the members. The CL at Pantajo has been a CL for many, many years at his former school before being placed at Pantajo. He, too, is very strong!

Before anyone says anything about those two CLs, I wonder if the ATR went to the CL to express his/her concerns. When I was at my school, as a dean and CL, I made sure that the ATRs' rights were respected. I told them to let me know asap if their rights were being violated. However, I can't read minds and some of them would not tell me anything. So how am I supposed to protect them from administration's blatant disregard and disrespect of their rights. I am assuming that those two CLs did not know of any of the violations. I suggest that ATRs go to the CL and report any contractual violations committed by administration. If the CL does nothing, then report it to one of the UFT borough office.

I will tell you of one incident that happened in the Stevenson Campus. A colleague of mine called me and told me that she was being made to supervise students in the cafeteria and she's a GC. She called me to tell me about the incident. Since I'm a retired teacher/CL, I told her that she must report this to the CL. She told me that she went to the CL and showed him the paper detailing the roles and responsibilities of GC as per Rosemarie Thompson. The CL ignored the paper and told her that he doesn't want problems with administration. I blew up!!! I told her to go back to the CL and tell him to do his "elected" responsibilities as a CL or you'll go to the Bx Borough Office and report his negligence of protecting her rights as per CBA between the UFT and the DoE.

Therefore, I feel that ATRs must go to their CL at their weekly assigned school and make sure their rights are protected. If the CL does nothing, then you must report it to the UFT. It is wrong to be in an elected position and not take your role to heart. The members are counting on the CL to enforce the CBA with administration.

The comments made were not directed toward the CLs at any of those schools. Indeed, you did not defend them in your post, just brought to light the short comings of the CL at Pantajo. That list was made from the personal experiences of myself and other ATRs. To assume that we did not contact CLs would be incorrect. Most of them are fearful and ineffective; something I no longer get angry about. I don't look for anyone to protect my rights, I do it myself. The stark reality is CLs at most of the schools I've been placed have been marginalized to the point of meaninglessness. Perhaps other ATRs would like to describe some of their wonderful experiences at those
temples of learning?

Good Points, but as an atr going from school to school the last 3yrs very few if any cl's have introduced themselves to me. As an atr its always a little scary/uneasy going to a new school where you don't know anyone. I wish the cl's would seek me out and my fellow atr's and introduce themselves and save us from more uneasiness. Over my 18yrs in the system I havn't found many good cl's. Just my opinion. Most give a lot of lip service and little substance. Just my opinion not a fact!!!

Why do you feel you have to come to a CLs defense? Its not about them. Wings is DANGEROUS. You have a high probability of being assulted there. I don't give a f--k about the CL.

The chapter leader is responsible for greeting the ATR and checking their schedule. The chapter leader is suppose to make sure the belongings of the ATR is in a secure place. Unfortunately all of these things have not happened yet. Some of these things have occurred but I may contact the borough office and indicate to them the lack of diligence on the part of the chapter leader. One of my greatest concerns being an ATR is not having proper union representation. My concern with discipline is that some administrators and teachers are clueless that students will behave the same way for the ATR. If there is a discilpine problem it is the fault of the ATR. All ATR's who feel this way should contact the borough office and make sure ALL traveling teachers are fairly represented in their weekly assignment.