Teachers Disrespected And Attacked And The DOE Does Nothing About It. 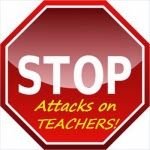 
A teacher with 20 years of teaching experience was supervising the detention room at Wings Academy in the Bronx when he was attacked by three students in the room.  The teacher, Reynaldo Felix called for assistance from School Security and the NYPD.  Only the NYPD responded to this vicious gang attack in a timely fashion. Where was school se3curity?  The result was the Mr. Felix suffered a cracked jaw from the female student punching him in the face and a fractured spine from the three students pinning him down and kicking him.

Was this an isolated incident?  Afraid not,NBC  News 4/s I-team interviewed seven teachers who said the school hides many violent incidents and puts their teaching staff at risk for their safety. In their interview Ms. Nucian Butler, a Biology teacher, stated that school administrators are putting the teachers in jeopardy by not holding troubled teens accountable.

The DOE claims they are conducting a full investigation and will take the appropriate action once the Office Of Special Investigations finishes their investigation.  Knowing how corrupt and unfair the DOE investigators are, I wouldn't hold my breath in making either a timely or fair decision.

The entire NBC News 4 I-tean interview can be found Here.

Update:  Apparently the Principal at Wings Academy resigned on December 6th according to a commenter on this blog.  I guess ex-Principal Lorraine Gutierrez will show up somewhere else in the DOE, probably at a useless CFN where all reassigned principals appear to land.
Posted by Chaz at 6:09 PM

Wouldn't be surprised if the DOE threw those kids a bonus for showing the world, how unfit for the classroom that 20 year teacher was. I mean, if you can't fight off three students, how can you control a classroom of 34+?

Thank you for your blog on issues that have become all too prevalent in the Bronx. Walcott has tauted the plummeting suspension rate, but that's because the principals are afraid to report any incidents! Many have told staff that under no circumstances are they allowed to call 911. ATRs are being put into dangerous situations because they're afraid to say no. At Wings most ATRs are placed in the SAVE room the entire day. There are absolutely no consequences for any of their actions, including assault. If you are an ATR you need to start standing up for yourself because your safety is at risk, and this is at most Bronx schools.

I wonder what rubric was used to determine the effectiveness of the teacher's injuries. (Irony is needed here as the state of affairs with the DOE is so disgusting right now) I pray for a quick recovery for this teacher and I hope that he rightfully wins his lawsuit.

The principal of Wings, Lorraine Guiteriez, suddenly "immediately resigned" on Friday, Dec. 6, after this aired and after a late in the day visit from DOE and network officials. She was seen packing her things. Word came later that the horrific principal is no longer at Wings and they have a new principal as of today,Tuesday, 12/10/2013. Who it is is not yet known.

Walcott as NYC chancellor::
People, this is really disturbing. This man talks about how he wants "the best teachers in the classroom" but really and truly, this man is quite possible the worst chancellor NYC has ever known. What a sham of a person!! You mean to tell me that Dennis Walcott does not realize that many many, if not all educators believe he really is a puppet. I mean, I have not met one educator who states they believe Dennis Walcott is a good chancellor!! NOt a one! SUrely this man must realize this no?? He is truly a yes yes man and never had a single thought or idea original when it came to the 1.1 million students of NYC. Now he states he is going home and will be saying yes yes to his wife?? DA! This is a man who has somehow taken advantage of the system and has managed to work in education but really people this guy belongs in walmart where he can repeat himself all day sale sale sale. Not tying to undermine this man but look at how our teachers specifically ATR teachers are suffering each day. A real chancellor would have convinced mikey bloomshit that they should be utilizing the ATR educators. NOw a story in the news regarding a pregnant teacher who was hit by students and lost her baby due to miscarriage. This teacher was an ATR teacher and this tragedy goes on walcotts watch. Shame on you puppet, you are now irrelvant in NYC thank God.

Where are the statements of outrage and defense from the UFT?
In Buffalo the union leaders speak out.
http://www.wivb.com/news/local/teacher-goes-to-ecmc-with-head-injury
http://www.buffalonews.com/apps/pbcs.dll/article?

Many of these incidents go unreported.

The principals of these schools DON'T want to file reports of violence, because they are fearful of being investigated and placed on "high impact" lists.

If schools consistently appear on these lists, possibly, the DOE will seek to close the school, as was Lafayette High School in Brooklyn, which reportedly had high incidents of violence.

In the meantime, teachers and students are being hurt, some very seriously.

AND, there aren't any consequences for the students that have exhibited the violent behavior towards others.

Why is this situation tolerated?

Lorraine Gutierrez is now an assistant principal at John Dewey High School. She has no office. She assists another assistant principal and does not seem to do anything of real value other than clerical work. Oh! Someone has told me that she observes veteran teachers and tells them all of the things they are doing wrong in the classroom. So things have not changed much since her ineffective

I work at Wings. The kids didn't hold him down to kick him, but they did put him in a choke hold re: the spine thing. The new principal has been aggressive, requests week of lesson plans in special folders hanging in front of class. The school is still...well, Felix was assaulted again in early May, after telling the deans that a student had a razor blade boxcutter. Its June 20th and he hasn't been back to work. The kids here are confrontational. I came upon this site from google searching Lorraine Guttierez, fired in Dec after the news story.... I wonder where she is. She was definitely insane. We heard from school psychologists who worked with her before Wings, the words 'bipolar' were used. She forbid the dean from attending the hearing to suspend the 3 students who assaulted Felix. It was all 3, that needed Superintendant suspension and didn't recieve it, not two, the third was incarcerated the entire time period due to a knife assault 4 weeks prior to attacking Felix. So her nonsuspension was moot. She forbid the dean to go, which is the same as when a cop doesnt show up to your speeding ticket hearing, the charges are dropped. We thought it was out of evil. It wasnt, it was pure stupidity, she felt she had too many teachers out that day. She had berated the dean, WHY DIDNT YOU TELL ME THAT WOULD HAPPEN?? We didnt know this, we assumed evil, but as the Bush years show, evil and stupidity are often hard to distinguish, when you have leadership of incredible arrogance with an evil streak. She demanded from one teacher to tell her who was speaking ill of her. Which was damn near everybody, that teacher reported to us the evil request. So you can understand when we saw the students who had been arrested for beating up our coworkers walking the halls a few days later, we assumed we were working for Satan.
The teachers who bravely went on camera and the others who talked to Viglioti and Dienst of NBC were horrified to learn that NBC was going to spike the story due to the Principal's version of events differing from the witnesses. Than we learned, as an epilogue, in March we learned that She filed corporal punishment charges on Felix and the other staff who tried to save him. Charges the new principal discarded after doing her own investigation.

R.I.P Ms. Gutierrez. You terrorized the Benjamin Banneker staff and then you died.

MS. Gutierrez died in honor of teaching an helping others, sorry if her passion got in the way o her actions. But teaching an making a deference in the community was her life. Her health was not that important to her then the students an teachers she worked with. L,Gutierrez will always be missed an loved. May her soul rest in peace. EX student ps I'm an engineer for the MTA now. Where would I be if I didn't have such an amazing loving teacher as her self.