Are The SCI Investigators Really Interested In Finding Out The Truth? Not If You Ask Me. 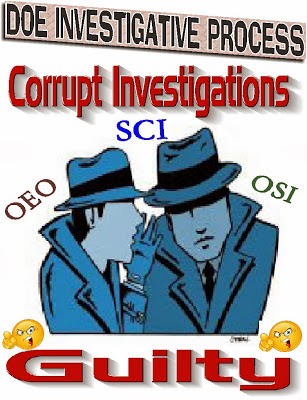 In the last five years I have written many posts that questioned the fairness and objectivity of the DOE investigative departments.  The Special Commissioner of Investigations (SCI), The Office of Special Investigations (OSI), and The Office of Equal Opportunity (OEO).  Nothing recently has changed my opinion of these investigative agencies and as far as I am concerned they are simply tools of the DOE to get teachers terminated when accused of the most frivolous of actions while protecting the alleged vindictiveness and misconduct of administrators  You can find my previous posts on the DOE investigative process at corrupt investigations.

Now a teacher told me a story that confirms to me that these investigative departments, paid for by the DOE, are still more interested in getting teachers terminated than finding out the truth. This story, as told to me, is about an untenured teacher who was getting satisfactory observations by the AP of her high school until she witnessed another teacher coming out of a room with a student and with his Regents paper in hand which was in violation of New York State testing procedures.  She quickly realized that the teacher was alone with the student and that her experience with the student told her he had no chance of passing the Regents without cheating.  She knew the school was anxious to graduate the student out of the school however, she decided it was her duty to report the alleged cheating to the Assistant Principal who was in the hallway that January day in 2013.  The Assistant Principal assured the untenured teacher that he will handle the problem.  Of course a couple of days later she found out that the student miraculously passed the Regents and graduated from the school.  She asked the Assistant Principal what he did about the cheating allegation and he told her that it was handled and don't bring it up anymore.

During the summer the news media got wind of the story and wrote an article about an untenured teacher being terminated because of her claims of whistle blowing.   It seems that after the article was published, SCI took the case on to determine if there was cheating going on at the high school.  In January of this year  SCI substantiated the alleged cheating and the school apparently removed the teacher involved.  Sounds like SCI did their job right.  Wrong!  SCI never bothered to interview the discontinued teacher who made the original complaint about the alleged cheating.

The question is why didn't SCI interview the main witness to the alleged cheating?  While I cannot say why SCI didn't interview the discontinued teacher, I must suspect that they were afraid that her testimony would have implicated both the Assistant Principal and the Principal in covering up the alleged cheating and maybe the Superintendent as well.  It will be interesting to see how this entire process plays out and if these administrators are cleared or found to have participated in the alleged cheating  since SCI is claiming that the investigation is ongoing.  Stay tuned as I suspect this will not be the end of the story.

Chaz,
That's a great piece on the investigative teams who all work for the city. Each if the units you mentioned are corrupt, all working for NYC so why would they risk their jobs since they're not federal.
Anyway, I work in a high school that's phasing out. The network assigned to us is the "phase out" network. That term alone is hysterical but what's even more funny is the team that comes into my school in the Bronx. There morons come in like once a month or whenever they like and do ABSOLUTLEY nothing. Six figure salaries being paid to the phase out network for what? Is it their job to help us phase out? They do not meet with teachers and do not do training, etc. One moron comes in and hangs out with the subpar principal as they make fun of the teachers, pointing at them and saying who will be an ATR come September. CFN 610 transition network (phase out team) is the freaking worst group of degenerates from top to bottom. The fact that this crew even have the balls to show face once or twice a month is amazing. Other principals have just told them to stop coming to their schools because they're useless. The entire CFN staff in the Bronx for phase out schools are terrible. They themselves are former administrators mostly who were given jobs. They suck. Fariña is aware and should adjust this soon.

Let's see what happens with Sills @106

She walks around with a huge smile. All is normal

I know for a fact my investigation on my Principal was corrupt.They mentioned things in the decision letter that never happened.De blasio needs to clean this up too.

It has only been a month. I know time is of the essence and wrongs needs to be righted, things need to take time.. especialy with the thousands of fires that need to be cleaned up in NYC DOE.

Tried hard for 40 years to believe that if "major crimes" were committed involving either administrators as well as regular school staff, that they would be duly addressed and action taken. If Principal Sills is not walked out of P106 in due time, all faith will be lost. This is NOT a case of one teacher blowing the whistle on an alleged corrupt Principal. Agreed that that situation could be "he said ,she said" or "crazy vs. crazy". This is teachers [with an S], retirees, parents, students as well a neighborhood store owner!!! What is not clear in this investigation??!! Ironically, I just watched the movie SERPICO!

Ah haha haaa haa. Ah ha haaa haaaa!!!! You must be talking about the laughing stock of the Bronx, Mr. Steven Chernigoff. This piece of shit is the biggest bullshit artist. Why Jose Ruiz keeps this useless former administrator is mind boggling. He is one of the dumbest individuals possessing a title of power. Then again, he's a phase out network leader which is the same as working in a zoo with no animals. You're just there for no reason making six figures. He is on the top 10 most useless positions within the NYC DOE. The man is a failed administrator who now works in the administrative ATR sector which is called, a network.

Want to know corruption - no nothing atr field supervisors giving out u ratings all over the place to atr teachers who are teaching students they don't know in schools they don't know and without any resources or support. Twenty years of s ratings and these losers who have sold their souls give u ratings to atrs. Disgusting - corrupt and must be stopped.

Thanks chaz for identifying the false investigations that these DOE people do.

Its about terminating teachers not finding out the truth.

And in another school it would appear that the Principal was tipped off along with the school secretary how to clean up their mess so they would not be found guilty. That Principal was the same one who got a Public letter to her file for using a low paid school aide for driving her son to and from school daily.