Ex Members Who Resigned File A Lawsuit Against The UFT To Get Back Their Retroactive Pay. - Are The ATRs Next To Sue? 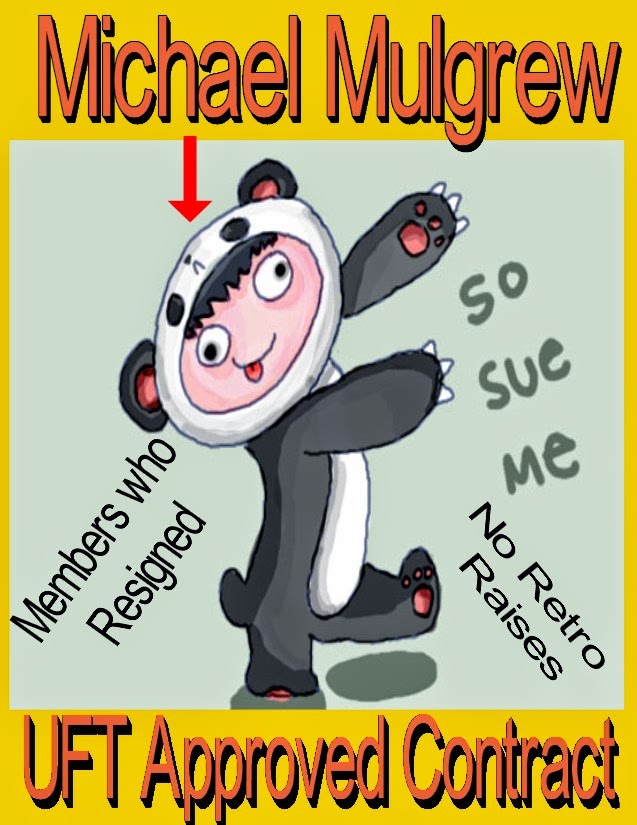 As I expected, some ex-members who resigned or were terminated before the age of 55 have decided to file a lawsuit to get their much deserved retroactive raises between the 2009-13 school years which was unfairly deprived by the City and the UFT in the recently negotiated contract. How any union could eliminate up to 9,000 ex members from getting the retroactive pay that they worked for is  just plain wrong. Yet, that is exactly what happened with the UFT.  It appears the UFT violated the equal protection under the law provisions in New York State, I guess time will tell if the lawsuit is successful.

While I believe the inadequate contract was a favor to the De Blasio Administration that allowed the City to establish a "city pattern" that got the City off cheaply.  However, why did the union sacrifice many of the members to satisfy the City?  Not only will 9,000 ex members who resigned. terminated, discontinued, or died not get their retroactive pay but add another 3,000+ ATRs who are now second class citizens with an expedited 3020-a process based on a vaguely worded and defined  "unprofessional behavior".  Moreover, any ATR that won their 3020-a hearings will be not offered vacancies or temporary positions by the DOE.  These 250+ educators are now known as the "untouchables".   This group, I'm told will include any ATR "U rated" in the last school year.

Hopefully, the ex members will win their lawsuit and be getting their much deserved back pay and the next lawsuit the union may have to deal with is the ATRs for their failure to properly represent them and allowed the DOE to impose different rules on them that no other Municipal unions have for their members.

Chaz any idea how many ATR's received U's last year?

I believe if a teacher resigns or is terminated before 2020 that individual will not get the full retro either. What will be the ramifications for current UFT members if these former members win their lawsuit and are paid? Could this mean we may get more of the retro upfront? Or at least a teacher will get the back pay even if the person is terminated or resigns? All it takes is one successful lawsuit to open up the floodgates. This contract was poorly negotiated and Mulgrew should be rated ineffective for a lousy job.

I agree it's high time for an ATR class action suit against the UFT. We shouldn't wait until people start getting terminated for wearing different colored socks or saluting the Nazi academy principals inappropriately. Das fuehrer is gone, but the SS remains and awaits September with glee.

Chaz,
Any idea as to why another Leadership Academy Principal was fired on the last day of school to purposely avoid media attention? The school is the Collegoate Institute for Math and Science on the Columbus Campus in the Bronx. This one was kept real low.

He should be fired sans due process.

I can confirm if you are not in service at date of retro payment you will not get retro pay. It doesn't matter if you worked between 2009 and today. Yes, it's a scam. How many will quit, resign, get terminated between 2009 and all 6 payment dates up to 2020? But of course, we agreed to it.

Anon 7:14. That is some heavy info. Cannot believe The post or DN didn't pick that up.

Before Mildew gets thrown out of his cushy, totally undeserved job for which his incompetence has been proven beyond doubt, he should be made to run a gauntlet made up of all the ATRs he screwed, each armed with a tightly rolled-up copy of the new contract.

Yep Chaz, another Leadership Principal fired or "reassigned" pending further investigation for irregular time keeping & reimbursement. Collegiate Institute for Math and Science. New principal in power now, wondering if he is another Leadership Academy "scholar" . And its a New Vision school to boot. Things that make go Hmmmm.

I dont understand why the UFT would be obligated to represent members who have resigned .They chose to leave and no longer pay Union dues.

People who argue that the new teacher contract was poorly negotiated need to look no further than this lawsuit to see how *good* this contract is. We received the retroactive payment that no one thought we'd get-no one. And as soon as we do, here come the former members asking for their cut.

6:07, in-service members (i.e. people who are on payroll and getting paid full salary with benefits) will receive their retro payments so long as they remain with the DOE. If you resign in 2018, for example, you will get the retro payments that have been paid out up to that point: 2015, 2017, and 2018.

To 7:14,
Perhaps for something all ATRs are assumed to be involved with? Drugs, sex with a minor, or reporting illegal or unethical DOE activity.

All of our dignity rests in class action suits against UFT, Duncan, etc. THE time to class action though, was when Klein The Hyena was blatantly slandering all teachers during the teacher holocaust of the Scumberg years. That was slander, and worse. The UFT, The Hyena, Scumberg, Daily Puke, NY Joke, and NY Slimes,could ALL have been sued by the UFT successfully.

Of course, if the UFT was a union at all...little of the abuse would have been heeped upon us at all.

What about the Assistant Principals, Principals and teachers who went to administrative positions, they are not entitled to their retro pay? If you worked during that time you should be paid, regardless of where you are now.

Even more interesting, the Daily Snooze is reporting that talks between the City and the CSA are stalled over the same issue. It seems that newbie administrators won't get the retroactive raises for when they were teachers, affecting about 2,000 CSA members. If they get the raises, it should help those who quit/fired, since they did earn that money. But it will be interesting to see what happens if they do get the back pay - what will Moldgrew and his lackeys say then?

Chaz said...
This comment has been removed by the author.
7:00 PM

No other Municipal union agreed to miniscule upfront raises, making second class citizens of a couple of thousand teachers, and screwed members who resigned from receiving their worked for raises.

Everybody kne3w that the three panel arbitration board was set to grant the two 4% raises to the UFT, the only question is how the retroactive pay would be handled?
Your comments about this is disingenuous.

Chaz,
You got the Collegiate Institute Fir Math and Science story before Edelman, Gonen, or Chapman. The principal was removed. Money MISSING. Hello Leadership Academy!

I've thought about hiring a lawyer to sue the UFT and city. It would make more since for all of us (ATRs) to join together and file suit. Perhaps via More or ICE? If there isn't a group action soon, I will proceed on my own. Does anyone have any information on any ATRs organizing?

All workers who were employeed are entitled to retroactive pay and more importantly, the incentives that may go along with future retirement benefits they worked for. Teachers working an established period of time (5 or 10yrs) are entitled to some form of pension at a certain age, regardless if they are still employeed, retired, or resigned. Therefore, the working class citizens should get every dollar earned, even if they resigned.

Lets hope the courts feel the same way as anom 2:18

If one retires, which I would assume to be technically quitting and you are getting your payments up to 2020, then why not everyone that worked those years.

I believe the union erred when it provided retroactive pay fo rpresent employees. Legally, what's the distinction? As a former special educator in one of the toughest schools, I earned that compensation. I paid into the union for representation (joining was not optional). I never had an disciplinary issues (thus paying for services for meager representation). One of the objectives of the UFT is to negotiate contracts, if an educator failed to meet established goals, then one would be "U" rated. Inefficiency of process, does not exclude the responsibility of meeting objectives. I am fine with not receiving a sign on bonus, but c'mon we earned our pay.

"Their cut"? We worked in blindly, without grief, teaching our students. I paid for a service that I did not receive for 5 years. Unless there is a legal justification between "status" employees vs. Non-employed, we will receive our compensation. It may be difficult to comprehend why we are requesting retroactive pay, but we earned it.

Hi chaz. How can I join the lawsuit?

Just go to the underlined lawsuit word and double click, the lawyer's name is in the Daily News article who's in charge of the class action lawsuit.

I am an ATR, and have been for the past five years. I was rated U last school year and this school year. I want to sue the DOE for discrimination, slander and unprofessional behavior. All I want to know is how I can go about filing a lawsuit?