Memo To President Obama. In New York City Its Not About Hiring Quality Teachers But The Cheapest Teachers For The Schools. 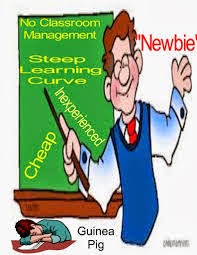 Today President Obama has finally decided that all school districts must have an "educator equity plan" by April 2015 that requires all States and school districts to place "quality teachers" in front of the classroom.   This long neglected part of the No Child Left Behind Act (NCLB) requires that all classrooms have an equally high percentage of "highly qualified teachers", regardless of income or racial composition. This long neglected provision of NCLB allowed school districts to hire whom they pleased and in many "high needs" communities that meant hiring uncertified or alternate certification instructors who lasted a year or two and then left the school.  Teacher turnover is a serious problem and negatively affects student learning as many of these teachers are hired simply because they are cheap and its not children first but money first!  It now appears the Obama Administration will no longer give waivers to this part of NCLB as it has previously.  However, time will tell if they don't bow to political pressure from Teach For America and education reform groups who depend on an influx of poorly trained and unqualified "newbie" instructors to fill the schools. The Federal Department of Education's website has the entire initiative called "Excellent Educators For All".

That brings me to the New York City DOE who has long practiced "education on the cheap" policy and with their perverse "fair student funding" requirements forces schools to hire the "cheapest" and not the "best teachers" for their schools.  This is in apparent contradiction to the new imitative. Will The Obama Administration penalize the City for their policy that fosters teacher inequality in the schools or will they ignore the blatant violation of the educator equity plan of the NCLB as they have been doing for a decade?   Furthermore, how can the City explain the hiring of uncertifed TFA and Fellows for these schools while "highly qualified teachers" as defined by NCLB , languish in the ATR pool being used as glorified babysitters?

It will be interesting to see if the Obama Administration is serious about the teacher inequity problem and refuses to give waivers to States and school districts from the educator equity plan as they have been doing previously.   If the President follows through on his initiative then the DOE must rethink how they fund schools and eliminate the "fair student funding" that hinders the hiring of "highly qualified teachers" for the schools most in need of these teachers.  Only time will tell if the enforcing of the educator equity plan under NCLB will actually happen.  If it does, I'm sure the DOE will try to tiptoe around the educator equity plan and maintain their "education on the cheap" policy at the expense of the poor and minority students of the affected "high needs" schools.
Posted by Chaz at 1:35 PM

Can the ATR's sue the UFT and DOE under this provision of NCLB? The treatment of the ATR's is just plain disgusting. Chaz, keep up the good work. I enjoy reading your articles thnat reveals corruption and hypocrisy in the school system. Keep reporting what is going on and hopefully something will change for the better with the fair funding formula.

Where is the union? Sounds like to me the union is our worst enemy. They weakened our rights, allowed the working conditions to deteriorate, and screwed us with subpar raises. The union's silence makes them complicit in all of this. Mulgrew is stabbing us in the back.

Does this NCLB provision also address the need for qualified and unbiased administrators in each school setting as well? The every day instruction of any quality teacher-- whether they are a veteran or new teacher--won't mean a thing if their supervisors have no clue on what good instruction should look like in a classroom environment.

How right you are. In my travels to over thirty Queens High Schools I have seen the destructive effects of poor administration.

In fact, my school closed because of the poor quality of principals we had for a decade.

Chaz,
Can you clear up what they mean by highly qualified teachers. Are they referring to creditentials or ratings align to the framework

Personally i think more should be done at the college level to better prepare new teachers who are motivated to become effective teachers but do not have the experience, knowledge or tools to do so.

Shouldnt all college teacher serve as a para or t.a to get some experience before getting that all important piece of paper that certifies the individual to teach

I wish was true in all cases because if you are not a teaching fellow or TFA or have connections with a principal in a school. It is really hard for a new teacher like me to find a job in a public school. I heard very often from school sorry we have to take an atr for that position. I wish I still had hope that I would find a public school job.

What we need is a Loser Principal website/page to embarrass these creeps.

To 7:45,
99.9% of ATRs are highly effectictive. We have licenses, masters degrees, tenure, tons of experience and have well honed tested classroom management skills. Walk into any of the mini-schools and you will find the anthesis of a highly effective teacher in front of the students. Of course the administration of these school are often as clueless as their teachers. They've been trained as business managers and are using a business model. Many have never taught! Most of these schools are much closer to fast food restaurants than to centers of learning. The bottom dollar is paramount, not students (or their problems). Teacher are viewed as an unfortunate nessasary cost. Closing large schools to disenfranchise tenured teachers, hiring cheap labor, demoralizing these teachers by creating the ATR pool, and ensuring the cheap labor will never get more expensive (denying tenure, terrible working conditions, and Tier 6 creation) are all part of the DOE's business plan.
Of course this is all highly unethical and skirts legality. With the enforcement of all mandates of the race to the top funds, ATRs will have to be put back into the classroom. Look for the DOE to attempt to get rid of as many ATRs as possible by the 2015 deadline.

To 752,
"Sorry we had to take an ATR for the position"?! Unless it was for leave replacement that's complete bullsh-t. No ATRs are getting hired. The UFT continually lies about it, though (and about the true number of ATRs). If you don't believe me, request via Freedom of Information law the name of the individual hired and check their status.

I also believe that's bullshit. I know of no Principal who would do that unless it was a leave replacement.

With the new common core learning standards, Reading Teachers should be returned into the schools. The majority are currently ATR's.