The UFT Contract Screws The CSA As Well. 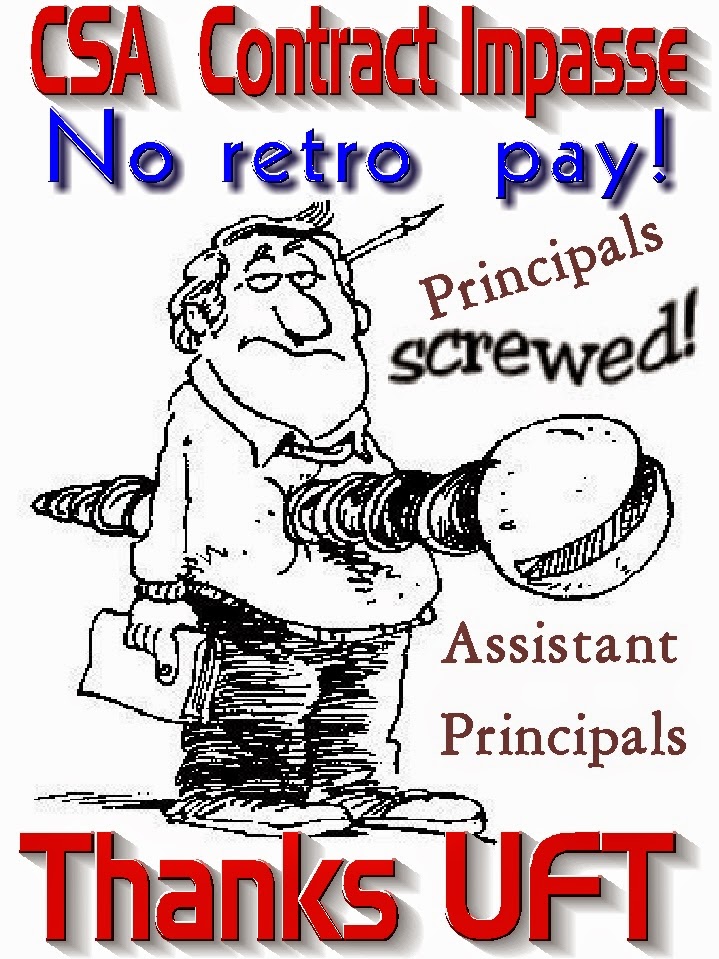 According to chalkbeat, this is one of the major stumbling blocks between the City and the CSA in negotiating a new contract.  However, there may be other unresolved issues as well.  For example the City wants the CSA to agree to a 7% return on their TDA instead of the existing 8.25%,  without any givebacks and the CSA agreeing to a similar ATR provision for their excessed members.

The City and UFT agreed not to call the two 4% raises as retroactive raises to get around giving every member and ex members their well deserved raises but if it looks like a duck and quacks like a duck, you can't claim its a goose.  However, both the UFT and the City is doing just that.  Blogger JD2718 has an excellent post on how the UFT stopped using the term "retroactive raises" when they sold the contract to the members and is a must read.
Posted by Chaz at 4:21 PM

Think of how ridiculous this is. I work, with satisfactory ratings every year from 2009 until now, and going forward. Lets say in January 2015 I must resign, maybe my family has to move, maybe an illness, I don't like the job anymore, whatever. I would not get the retro payments because I am not in service on Oct 1, 2015 or any of the payment dates. The pay is for work starting 11/1/09, but I lose all the money, roughly $40K. lets say I resign in the summer of 2017, then I would only have gotten the 2015 payment, which is one eighth. What a scam.

Let me see if I understand this bait-and-switch tactic from our union. Those UFT members that retired during an expired contract will not receive any retroactivity payments nor will their pension be recalculated? Please tell me that I am wrong for assuming this.

Clarify this because if that's the fact then many, many retired UFT members who retired during an expired contract are going to be very, very pissed off.

Wrong! If you retire (not resign) you will get all the retros at the time active members would. However, if you resign or change to another union you get nothing.

Mulgrew when touting this contract repeatedly called it retroactive pay, as did everyone in the union. (I repeatedly said it couldn't be because there's no interest and there are years skipped.) Now that people are suing, it's not retro? Does that mean he lied to all the members who voted for this contract? As an ATR I am totally disgusted with the UFT and I know what's coming next. Massive targeting and termination of ATRs. It's time for us to organize and sue.

Thank gd I am in Tier IV and can retire with a RIDICULOUSLY generous pension at age 55 with 32 years of service. This comes to 63% of final salary. Where else can you get that kind of money as a retired city worker??

Upon retirement, I take my pension and TDA and live like a KING in Florida. That is all I keep thinking about in order to get me through my final years at the DOE.

Mulgrew is duplicitous and cannot be trusted. He is out of touch with the rank and file. What does he exactly do for his salary? He should be required to teach a class and be subject to Common Core, VAM and Danielson. Since he is a BIG supporter of the growth model make him teach a class with levels one and two. I am glad those former members are suing and hope the union loses.

I hope the ATR's sue the UFT and win. The ATR's pay dues like every other member and do not get the same kind of union representation as others. They work under the same job title as appointed teachers but with different work rules. The only thing Mulgrew knows how to do is tell members they are out of order at the delegate assembly meeting when they have a question that he cannot answer (this happens often).

Anon 11:37 - I'm in the same position as you. This is so AWESOME!!!!!! 63% at age 55 where top salary will closer to 130, maybe 135K. About 8K a month TAX FREE!!!! And for now, my young half retarded principal loves me. So great!!!!! I think she knows that I know, that she had an affair with a co-worker of ours at the school. Anyway, teaching 2 classes a day and playing make believe dean for the rest is super fantastic. My 1st period is a no-show class so I really teach 1 class a day. I can't complain but wouldn't want to be an administrator. Plenty of cushy jobs in needy high schools in south Bronx. I love this job (gig).

One of my favorite days this summer was this past week when I read about former members suing the union. I really want to see those boneheads in the union lose this one (are you reading this Mikey?). Perhaps there will be a lawsuits by CSA members who were in the UFT and are not eligible for back pay. Perhaps the ATR's will have their own lawsuit again the UFT. Sounds like Mikey will have a full plate of lawsuits to digest.

To 11:37,
You're exactly the type of person who is now being targeted. You're at top salary, experienced, and middle-aged. If you are currently an ATR, you might as well wear a bullseye on your back. Think the UFT will protect you? ATR supervisors Quail and Stark will laugh in your face, insult you and tell you better retire. (The UFT will tell you the Unsatisfactories mean nothing, don't worry about them and that they're aware of the sadistic supervisors.) Then the systematic harassment will begin. Whatever you do will be wrong.
I advise all ATRs to record their conversations via the free app on your iPhone. NY state law requires only one person to be aware on a recorded conversation. I also advise all ATRs to carry a small notebook to take anecdotal records. Hope we can all make it to 25.

Sanitation, nypd, fdny, and they can retire from the city after 20yrs, no age requirement......... seems like your one of those do nothing teachers with a lot of time in the system ..... so u brown nose lacky ap's, principals, and do nothing union clowns...... all by buttering last months leftover bagels just not to do your basic job. Sad to see so many old timers not sticking together to help the very much qualified, talented, and younger teachers.

The reality is that the hiring f younger teachers is based on money and control and not what's best for the students.

I would very much like to advance my career and move up into an administrative position. If I have the opportunity to do this, I will lose my retroactive pay? Is that true all the way through 2020?

Is there any chance that this situation will be changed in the CSA contract that they are working on?

Does the city not want any teachers to move up? Do they want to ensure that all new administrators come from the outside?