The DOE Labels ATRs With A Special Identity Card. 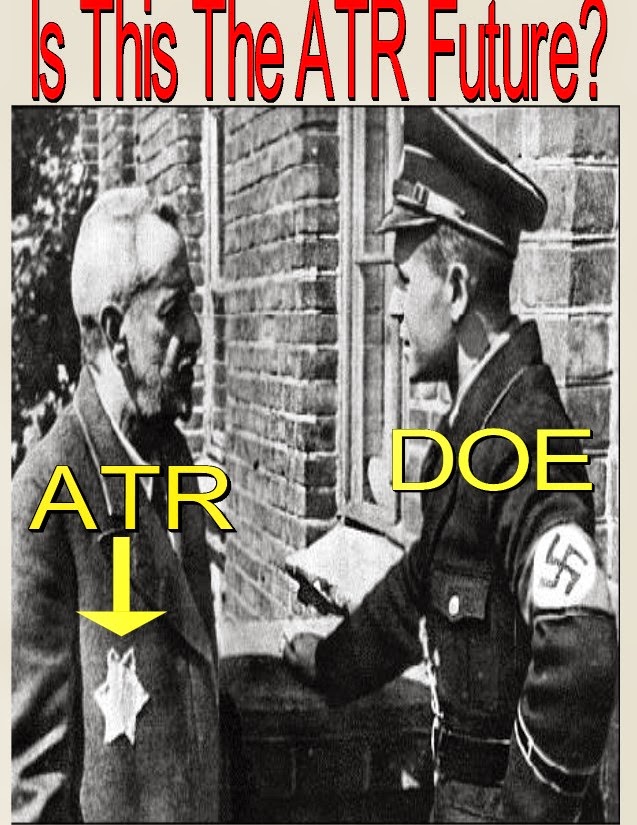 One of the ATRs went down to 65 Court Street to make some changes in her personnel file and decided, while there, to get a DOE employee identity card.  She had her picture taken and received her new identity card.  Shockingly, she noticed that the new identity card had stamped on it "ATR".  The educator told the person who gave her the identity card that she didn't understand why "ATR" must be stamped onto the card since its demeaning and by September she might land a position.  The response is that is what the DOE has ordered her to do. An itinerant teacher who I know showed me her DOE identity card and it just had her name on it not "itinerant teacher".  This is just another example of labeling the ATRs.

We all know that being an ATR confers "second class citizenship" , Thanks UFT, and if one won their 3020-a discipline hearing they are labeled "untouchables".  Now it seems that the DOE is stamping on the identity cards "ATR"!  What's next?  Requiring the ATR status on our clothes?  If the DOE could legally require it, in my opinion they would.   The DOE already have included a red discipline flag on files of educators who have had a substantiated OSI or SCI investigation even when the substantiation turned out to be false when required to provide real and relevant evidence in front of an independent hearing officer.

There is no doubt in my mind that the DOE is trying their best to eliminate the ATR pool by any means possible.  Be it field supervisor harassment, useless weekly rotations, or special rules that reduces ATR "due process rights".  I expect the DOE to use anything in their toolbox to make being an ATR an uncomfortable experience and if an ATR breathes wrong, expect a "U rating" or 3020-a charges to follow.  The union?  They are part of the problem and not part of the solution since they have either agreed to, or ignore the DOE onslaught on the ATRs.
Posted by Chaz at 8:54 AM

This is way off topic but the passing of Bel Kaufman is worth noting. She was the teacher who penned' "Up the Down Staircase." I suggest this book (and Teacher Man by Frank McCourt) for late summer reading. Both of them get into the inanity of the system.

kaufman mentioned once that she had a hard time getting a license from the old Board of Examiners because she had an accent - imagine that!

The inanity and stupidity that she wrote about continues, only then it was laughable but today it is caustic.

By the way, what's next after
the ATR ID card? Maybe a tattoo?

And no Union help? What are we ATRs to do???

Why doesn't someone start a lawsuit. If be all in.

And this policy under a new "progressive" mayor...I think not.

This picture and post are extremely offensive. You should be ashamed. You can make your point without being offensive

If you are currently an ATR, you might as well wear a bullseye on your back. Think the UFT will protect you? ATR supervisors Quail and Stark will laugh in your face, insult you and tell you better retire. (The UFT will tell you the Unsatisfactories mean nothing, don't worry about them and that they're aware of the sadistic supervisors.) Then the systematic harassment will begin. Whatever you do will be wrong.
I advise all ATRs to record their conversations via the free app on your iPhone. NY state law requires only one person to be aware on a recorded conversation. I also advise all ATRs to carry a small notebook to take anecdotal records. Hope we can all make it to 25.

Chaz Bro,
If you are miserable about your atr staus, all you need to do is seek legal representation. Your continual whining about your status is highly amusing. This factor coupled with your 3020a dirtbag status is obviously the impetus for your unhealthy obsessive focus on the atr scenario. Why didn't you take the lump sum retro on 6/30 ? I did :-)

The picture shows how Jews were identified and labeled as second class citizens, just as the DOE is doing to the ATRs.

When I was told this story by the real person involved my thoughts went to the Jewish star too - immediately - I would never compare Nazi brutality and horror to anything else but it is a clear example of people being singled out and discriminated against and it will continue and it will get worse. Justin Stark - atr supervisor is the most disgusting person person whom I have ever met. I don't see how the atr field supervisors can live with themselves - they are vile disgusting incompetent losers.The union is doing nothing .

Bronx ATR don't forget to record conversations with newbies. They are piss ass snitches and liars. Also, send yourself am e mail of everything that happens so it's documented. Very important

Das Fuher Bloomberg would be proud of how SS Captain Farinafog and the SS leadership are handling the sub-human ATRs. Mulgrew is Prime Minister Chamberlain, who will see the UFT reach near extinction due to his complicity and non-action.

Take this post and picture down. Comparing nazi Germany and their treatment of Jews to ATR's is offensive and stupid. You crossed the line

Dump the remaining ATR's already, please. Min can't take another school year of watching a rotatable session of horribly dressed individuals who shop online, watch MetFlix, and play scrabble in the lounge. Please just place them back in a full time position and grade them on the Danielson framework and get it over with already. Quickest way to have ATR's retire or leave is to actually put them back in the classroom. Imagine going on your laptop or playing cards or sitting in the cafeteria get paid for all last year, maybe a few years? Then, get placed in a shit school with a full time schedule of classes all day. GOOD LUCK WITH THAT!!!!!!!!!!!!!!!!

I guess you are not an ATR otherwise you might see some similarities.

I'm preparing my yellow stars to sew on to my clothing. I will have to do some reading on what the Reich's regulations are for placement on clothing.
What time does the train arrive?

Anon 3:26. If your lowlife inept academy principal choose to put them in the lounge all day instead of training newbies what else should they do, talk to jerks like you? I commend them for doing anything than talking to the likes of you.

I agree with anon 2:18. Your analogy is extreme and many see as offensive. I was an ATR at one time and I feel your frustration. However, you know this is nothing more than a union/labor issue. Please visit my synagogue and share your stories as an ATR with the stories of survivors of the Holocaust. You might want to reconsider the post of that photo.

You have your opinion and I have mine. I'm not comparing the DOE treatment with the holocaust but the original labeling of the Jews in Europe is similar to what the DOE is doing to the ATRs.

Stop making it about the holocaust. it's not. However, in some way the DOE's attempt to terminate the employment of this targeted group (ATRs) is little different than what was done in the 1930's in Germany.

Thank you for responding. Of course I understand your point about the DOE's abuse of ATR's and plans to label and terminate them-and you are entitled to your opinion. But its that posted doctored photo from those horrible times where 'label and terminate' meant something else.

Lighten up! Chaz is just showing the similarities between the Nazis imposing restrictions on the Jews and making them second class citizens with what the DOE is doing.

The picture is a visual representation of those restrictions, nothing more.

I agree with Reggie Jackson about keeping a log of your experiences. Keep in mind that Mikey Mulgrew has not worked in a school in years. HE DOES NOT TEACH A CLASS. He supports Common Core and VAM but is not subject to it. I have seen appointed teachers late to school and on the cell phone during the course of the day. If an ATR gets written up for things that appointed teachers do here comes a lawsuit. Mikey takes dues out of check but screws us. Class action is the way to go.

Using any comparison to nazi Germany is ignorant, offensive, insensitive and borderline moronic. You can make your point in other ways. You lose supporters and strength in your argument and support for ATRs when you go to this level.

No one is branding numbers into people
No one is threatening someones life
The Jews did nothing to deserve that treatment. The ATRs can thank their union and fellow union members for selling them out.

Not to survivors and their children and grandchildren.

The picture reflects a labeling of a certain people (the Jews) just like the DOE is doing for the ATRs. Find something more constructive to complain about.

Too bad the UFT did not really sell out all of you ATR's who "won" their 3020a. You could have what Chicago has and you would all be done.

You back again? Please crawl back into your hole in the ground that you reside in.

Nothing wrong with a picture showing a label on a persecuted minority. It's what the DOE is doing to us

She needs to get a life.

I am an ATR and not Jewish. I find use of images like this to convey another message, diminishes and desensitizes us to the atrocities that occurred. I see it as offensive to those who suffered. I understand the message you are trying to convey but you overshot.

You have your opinion and I have mine. We can disagree but it will not change what the DOE is doing to ATRs.