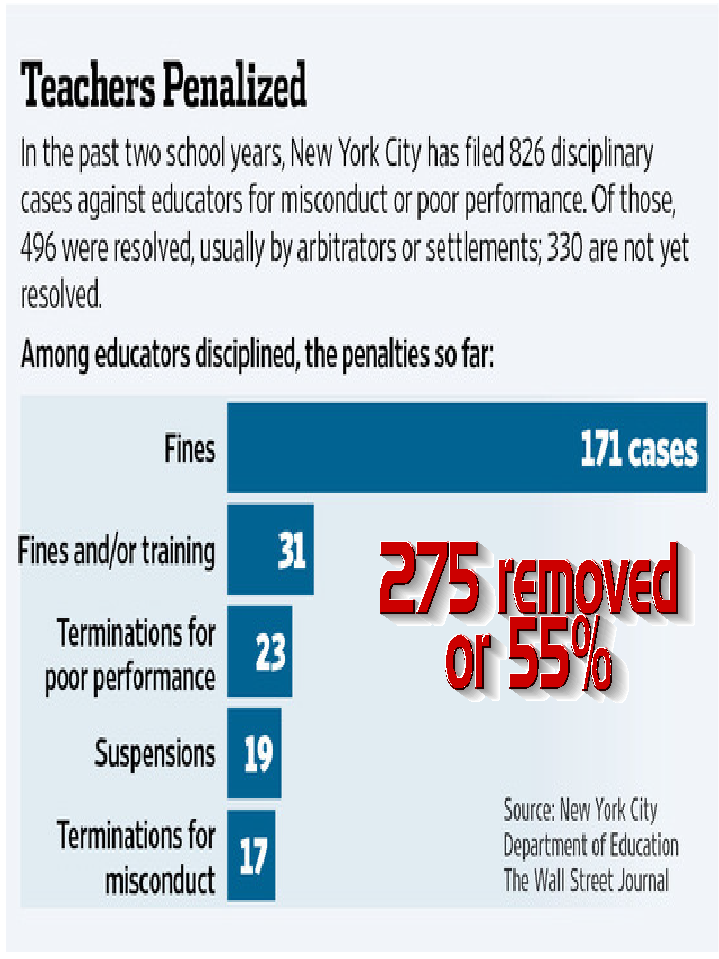 The Wall Street Journal received from the NYCDOE the 3020-a statistics for the last two years April 2012 to January 2014 on educators who were charged under section 3020-a for tenured educators.  If you browsed through the chart supplied by the newspaper it would seem that only 40 out of 826 cases ended in termination or 5% and that's what the newspaper wants you to believe since it supports the attack on teacher tenure..  However, if you read the article more thoroughly, you realize that 330 of the 826 cases have not been resolved and the termination rate therefore jumps from 5% to 8%, not a large jump but its not 5%.  Wait there's more.  Of the 826 disciplinary cases, it turns out that apparently 235 educators agreed or were forced to resign or retire rather than go through the 3020-a hearing process.  Add the 235 to the 40 terminated educators and the total educators removed from the system is 275.  Since only 496 cases have been resolved (826 - 330). the total percentage of educators that left the system after being charged under the 3020-a law is 55%!  That's right 55% not the 5% the Wall Street Journal would like you to believe is the case.

While the data shows no educator acquittal rates, historically, its been consistently around 4% in the last decade. Therefore, of the 826 disciplinary cases, one could expect approximately 20 educators to be exonerated.

The Wall Street Journal article is just another example of how the media uses "fuzzy math" to distort and pervert the statistics to suit their ideological aims and to support the attack on teacher "due process rights". Michael Bloomberg may be gone but his ideology still inhabits the corridors of Tweed and the New York City media.  The ICEUFT blog also has a similar take on how the Wall Street Journal manipulated the statistics.

Update:  The UFT decided to publish their own data for only teachers and found that for the last two school years (2012-13 and 2013-14) out of 637 disciplinary cases, 216 left the system by either termination (40) , resignation, or retirement (184).  That is a rate of 34%.  However, since 153 cases have not been resolved, the actual rate for teachers removed from the system is 45%  For the DOE its not about how many terminations there are its about getting rid of teachers and whether its 55% or 45%, the fact is almost half the teachers charged under 3020-a are kicked out of the system by the DOE.  This sample did not include administrators or teachers who employed a private attorney to represent them in their 3020-a hearings.

Interestingly, in the Schoolbook article, the amount of teachers that failed to obtain tenure between 2010-13 was 1549 for the sampled period.  Hard to believe that the education reform groups have any leg to stand on in their lawsuit.
Posted by Chaz at 3:31 PM

Why isn't the union writing a rebuttal or giving a press conference every time this happens? If they don't, it looks like it's true. Their modus operandi has always been to ignore it and maybe it'll go away. That hasn't happened- the media attacks have become stronger, more frequent, and more distorted. The union has become a non-entity for most of us. For me, it feels like the worst kind of betrayal.

The union does not care about teachers. We need to face facts.

We pay union dues and this union leaves the teachers hanging out to dry. We need to start mobilizing against this incomeptent and demeaning union. What does Mulgrew do exactly? How much does he make? Is it about $250,000? It appears to me all he does is collect a check and nothing more.

Nice analysis. It makes sense that the remaining 235 that's unaccounted for are teachers who were forced to retire or resign. Otherwise, they would be included on the other lists.


A few might have been exonerated but that;s a handful and no more than the fingers on ones hand.

Huge, earth shaking news from the UFT! They have secured 77 dollars for teachers choice for next year! WOW!!
Our union dues are really paying off with huge wins from hard fought battles by the UFT!

Dear Chaz,
No one is exonerated. Don't be shocked. Things will get far worse.
It has been my experience that the union is nothing more than a dues harvesting operation.

The "contract" and the collaboration, and the new "respect", the brazen lies and the lack of continual theft of services and total misrepresentation by the UFT on behalf of its dues paying members is downright criminal.
What's worse is that we the suckers/dues paying members, will continue this pattern of total apathy and willful ignorance.
Unless we have a total takeover of the union by the rank and file, things will get to the point when the union will no longer be involved in the representation of career teachers.
The people with the double pensions and bloated unearned salaries, decided about a decade ago, that teaching was finished, because their good friends , having robbed everything else, were now going to monopolize and privatize the last thing left to loot. Public education.
For a seat at the children's table for a few crumbs they sold out teaching as a vocation.
They probably got something under the table or in offshore accounts. It's either greed or complete insanity to have collectively bargained to destroy teaching as a noble career.
No other explanation makes sense.

Accordingly the UFT made sure to get others to pay the protection money/dues. There are many more dues payers that are not teachers that are harvested by the UFT ,than there are teachers who as members, pay to be misrepresented and shamefully abused.
Today I am very happy to know that the UFT is being sued for misrepresentation and god knows what else.
The word is that the bald pimp, Mildew, was served.
At least some of the long suffering and mistreated and abused teachers have had enough and taken our corrupt and lousy self serving Union to court.
I commend them on their actions and wish them Godspeed to bring to task, a more wretched conglomeration of walking bags of lying protoplasm, that I have ever had the misfortune of even sharing the same air.
The irony of it is that smart money says that the White Shoe law firm, Strook, Strook and Lavan. Swinegarden's old law firm, will be paid from our dues money in the rarefied atmosphere of about $800 an hour, to defend against members who are not only paying for their attorneys, but also for the UFT as a defendant in the dues paying members case against them being fleeced by said union.
If there is such a thing as justice the union should lose the case and pay damages.
It's high time teachers finally stand up and take to litigation when they are subjected to misrepresentation, abuse, theft of services and a universe worth of pure malicious incompetence.

They wander through their fiefdoms wearing suits with some ubiquitous button on the lapel, while pretending to have one iota of sympathy for those they are hurting by bad faith bargaining and the Vichy collaboration. Model.

Put them in the ATR pool. At least they might get a taste of the damage they caused.

No, they will continue to live off our labor and the shit conditions congratulating themselves to have gotten out of the classroom.
They think that we are fools to stay teaching. All they do is leech off our suffering and continually create even more stupid and insufferable hurdles for us to deal with as they continue to make life harder.

I cannot point to one instance where they have done anything but make working as a teacher for close to thirty years better.
On the contrary, every bone headed "deal" and anything they have done has resulted in a downward spiral. Terrible morale, no expectations caused by misrepresentation and actions that are inimical have made this a terrible career. It will only get worse.
The thing of it is that through this court action, the right people are finally being "held accountable ".

Old Enough to be disregarded.

Now it's time for the ATRs to SUE!!

Anonymous 10:23, you certainly speak for me. Couldn't have put it better myself. Both the DOE and the UFT are criminal enterprises who fleece both the students and their teachers of millions of dollars per annum. Teachers are not only squeezed for dues monies which are largely wasted on useless jaunts to exotic places to "study their educational system", stupid badges, hats and t-shirts which are discarded after single use, but then falsely accused of misdeeds for which they have to pay thousands of dollars of extortion money (oops, FINES) in order to keep their jobs so that they might continue to be harassed, threatened and belittled by their supervisors, parents, and even the children empowered by Bloomturd to do so.