One Third Of New York City Public Schools Found To Be Overcrowded. Just Another Nail In The Coffin Of Mayor Bloomberg's Education Legacy. 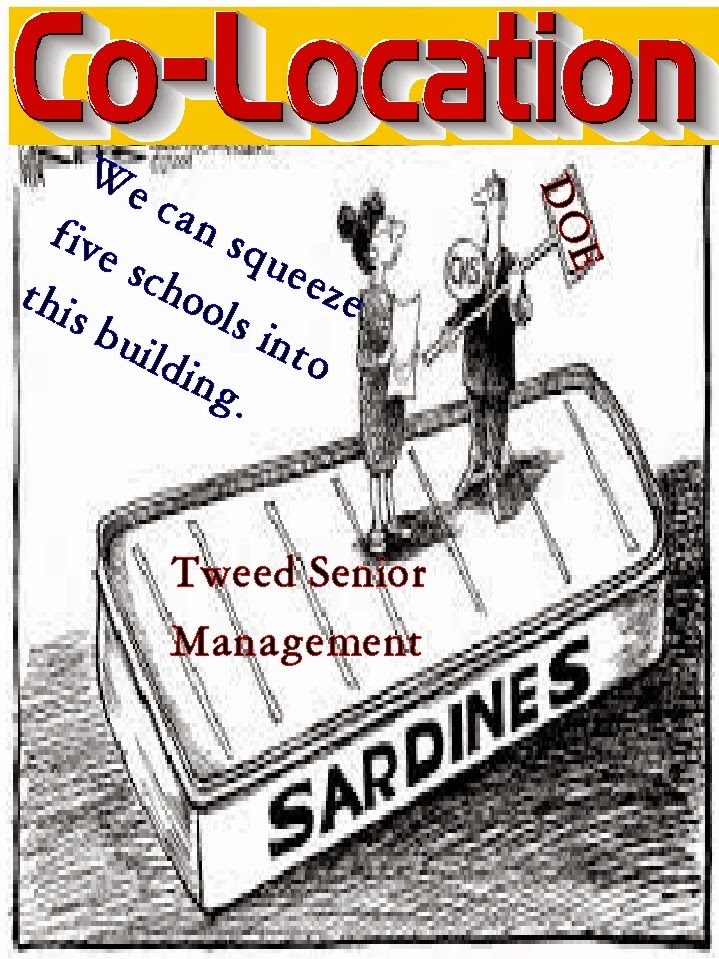 An audit by the City Comptroller found that an astounding 33% of New York City public schools were overcrowded and that Tweed used "fuzzy math" and creative bookkeeping to falsely claim that these overcrowded schools were within capacity.  The audit clearly points out the shenanigans the DOE used to shoehorn students into inadequate spaces and co-locate charter schools into existing buildings. Some of the most startling findings in the Comptroller's audit was.

First, the deliberate shrinking of regular classroom space from 600 to 500 square feet by the now discontinued and discredited Office of Portfolio Management to hide overcrowding.

Second, the slashing of specialty rooms such as music, art, and science labs from 1,000 to 500 square feet and special education rooms from 770 to 500  square feet to give the false impression of adequate space being available.

Third, enrichment rooms for subjects like dance, drama, and computer courses were included as classroom space in the classroom utilization report known as  the "blue book", to make it seem that there was more space per student then there really was.

Finally, many guidance and social work staff were crammed into closet-like spaces to give the false appearance of adequate classroom space.

Why did the Bloomberg Administration fudge the numbers?  How else can they ensure that charter schools and his favored small schools can be squeezed into an existing public school building?  Who needs a dance studio, a band room, or a Science lab when it can be downsized into cramped classrooms and make it appear the school is not overcrowded.   Moreover, who cares if Tweed included trailers, most of them over a decade old and some with mold as part of the equation?  An article by Juan Gonzales is a must read as he discusses many of the problems found in the audit.

Just like the graduation rate, the utilization rate used in the DOE's "blue book" is bogus and uses "fuzzy math"  to falsely show figures that served the purpose of the DOE and not that of the students who suffered from it.

While Mayor Bill de Blasio is starting to address this issue, it will take many years to change the culture at Tweed and he really needs to put Chancellor Carmen Farina back into retirement and hire a competent educator to be Chancellor who will really clean house of the Bloomberg ideology that permeates throughout the senior management at the DOE..
Posted by Chaz at 8:32 AM

It's incredible that so much waste has created so much need. Even room size was diminished by Bloomberg. Is there any doubt in anyone's mind that his policies were counterproductive to education? I also agree Ms. Farinafog needs to go back to Florida, pronto. She's much worse than Walcott. She knows (or should know) what needs to be done and chooses not to. The overcrowding has been going on for a long time (as has many other issues) and should have been addressed by Mulgrew. He's become a drooling, accommodating fool for Carmen - at our and the students expense.

Chaz,
I second your recommendation to retire Chancellor Fariňa. Two weeks ago today, in a lengthy corruption report sent to the Inspector General of the New York City School District, I accused her of lying and feigning memory loss in an OSI interview when she was Deputy Chancellor. She was questioned about what she knew and when she knew it a` propos a Regents cheating and cover-up case at the Cobble Hill School of American Studies which she had overseen as Region 8 Superintendent. Three times she told the investigator that she couldn’t remember key milestones in the case. Yet she was famous for her memory according to the New York Times: “A beloved and at times feared administrator, she seemed to know everybody in the nation's largest school system and has an uncanny ability to recall students from decades ago.” (“Top School Aide Becomes the Latest to Step Down,” April 27, 2006).

Strategic memory loss, that is, pinpoint amnesia, is a red flag to investigators. But Fariňa was protected by higher ups and the investigator was not allowed to substantiate her role in the cover-up. Last March, I sent a preview of my corruption complaint to her (and you) in an article titled “The Carmen Farina Nobody Knows.” So far, no word from her or the Inspector General. But it's coming.

I went through this new blue book and found it interesting that in Queens, there are high schools at over 150% capacity while at the same time there are high schools below 70%.
This is not accidental- it is a combination of parents not wanting to send their children to certain schools aided and abetted by the office of student enrollment's policy of keeping any noisy parent quiet. The DOE finds it easier to allow some schools to operate with plenty of space and cram others than to address the real issue---fixing the schools that don't attract students due to safety and low performance issues.

On a side note I received that propaganda email from Mulgrew about taking a pledge (when you scroll down the email you see Randi's name on the bottom). This is just disgusting. We are the only union in the city that has a caste system for workers under the same job title. Our sub par raises are mostly pushed into the future. You have to be in service to get the retro even though the raises pertain to years already worked. Chaz your article on how bad our contract is hits the hammer right on the nail. After this last contract I have no faith and no confidence in our crummy union that keeps selling us out.

You do not have to be in service to receive retro pay. Where are you getting this information??

Oh yea you do. The contract clearly states that if you resign, get terminated, or die before the ratro raises come due, YOU DO NOT RECEIVE THEM!!!!!

Chaz is right. If you're under 55 and leave, you get no retro. I had to move to Florida to take care of a family member and I was told that unless I come back within five years. I will get no retro pay.

This is Mayor Scumberg's expected behavior- nothing more or less. May he rot in hell-that apartheid MFer.