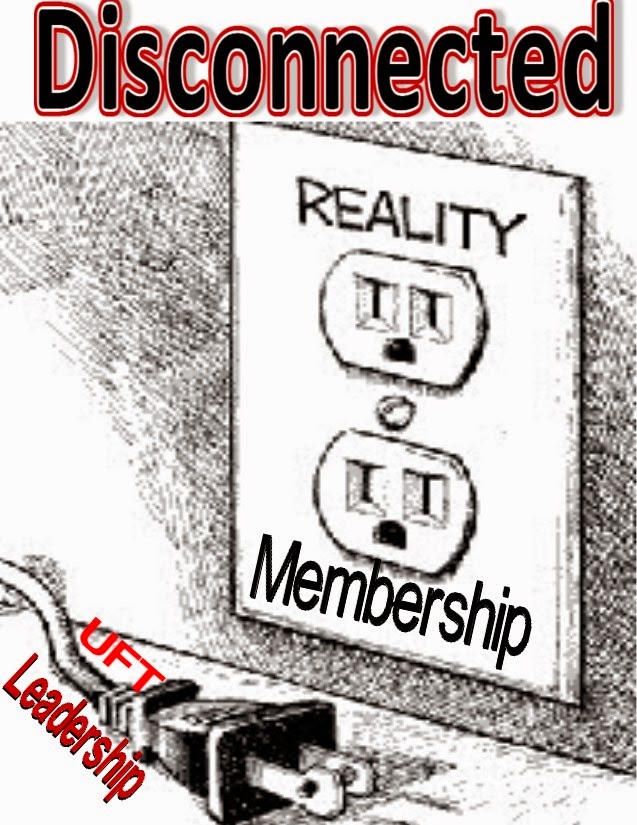 One of my quotes on my blog is "A union that allows its members to be disrespected, is a union that no longer deserves the respect of its members". Unfortunately, our union has lived up to this quote, be it the contract that made ATRs a second class citizen, screwing ex-members who didn't retire, or using member funds for non-educational or  political reasons. In addition, our union leadership has negotiated a vastly inferior contract that defers our 8% raises and retro payments till as late as 2020!  Hopefully, one does not die or resign before the raises are paid out. 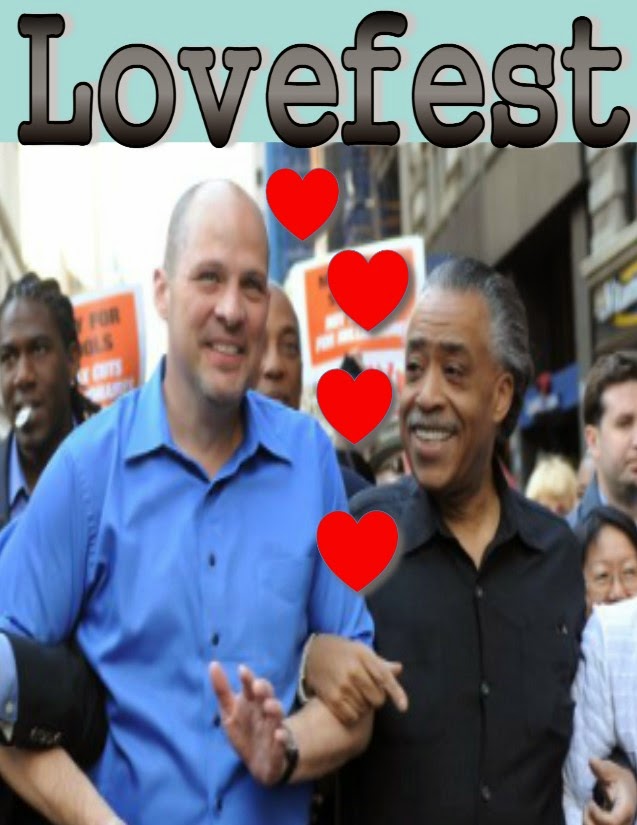 the union leadership to show that they are representing the interests of its members rather than their own interests.  A case in point is President Michael Mulgrew using his position as President of the UFT to issue an "Action Alert" to co-sponsor and provide funding to Al Sharpton's police bashing march.  Its one thing to march as a private citizen but its another when you circumvent your member wishes and put the union's money and prestige at the service of a racially divisive march, led by a known racial arsonist,  anti-Semite, and tax deadbeat.

I have never been more embarrassed and angry about the direction our union leadership is traveling, hugging the Chancellor while she made ATRs second class citizens and praising the new DOE attitude while saying little when the DOE kept the "fair student funding" and froze school budgets.  Need I remind one of the union's support of the badly flawed teacher evaluation system?  Moreover, if you disagree with Common Core, Mr. Mulgrew will "punch you in the face". Finally, the contract negotiated with the De Blasio Administration was based upon making the City look good at the expense of the members.

Mulgrew and his toadies don't care. They are the only game in town. He'll eventually take Weingarten's position, maybe sooner than later. Right now people are off and ruminating about this terrible contract, the demise of many rights (for no reason) and the onslaught of another school year. He may jump ship at any moment, like Weingarten did. (It reminds me of all the failing principals who became network leaders.) Bottom line - we no longer have a viable union.

Our union is now led by avarice, supported and bolstered by Unity shills.

It is Cuomo and NYSED in union form.

Re disconnected UFT leadership, try this one on:

On June 27 I filed a corruption complaint with the Department of Investigation against Special Commissioner of Investigation for the New York City School District Richard Condon (SCI) for his cover-up of a Regents cheating case. Since Condon also happens to be Deputy Commissioner of the DOI, there is a built-in conflict of interest. I expected DOI Commissioner Mark Peters to recuse himself and arrange a change of venue. No go. Instead Peters gave the complaint to his General Counsel Michael Siller for review. When I protested last week, I received no reply.

What to do? Naturally, I sought legal help from the union. I reminded Mulgrew that Randi endorsed my original complaint against Condon on the unanimous advice of an ad hoc committee consisting of then Secretary Michael Mendel, former New York Teacher reporter Jim Callahan, and top NYSUT attorney Chris Callagy who represented Francesco Portelos. I requested that Mulgrew appoint a new committee to vet my expanded complaint.

Mulgrew never answers my emails, so I used a friendly rep in the Brooklyn office to intervene for me. She sent the following get lost message from Mulgrew last week: “At this time, this is not something it would be appropriate for the union or NYSUT attorneys to get involved in.”

Muglrew is now pitting union against union. (UFT vs. PBA) This fact alone should be the straw that breaks his back. No union solidarity in NYC=the end of civil service employment as we know it.

And you know what al this means? Nothing. The contract issue is now over, 9 year contract, with terrible terms no less. We, the suckers, will go back to work next week to get abused, with much worse work rules, with a 2% raise on top of our 2009 salary. Its over. Its ruined. And go to the UFT for help on any issue, you get nothing, ignored, and talk to UFT reps who know nothing.

Wow, Obama sends 3 reps to the Michael Brown funeral, who beat the crap out of cop and is a thief and a bully. If a student from the ghetto shoots me next week nobody would care.

By the way, what happens when Mulgrew says a year from now...We tried to many the healthcare costs but we couldn't, now, as per the contract, all teachers must pay in to it. That will be a nice rude awakening for some.

A report in the NY Post reports student arrests way down. Safety officers say it's because the children see their friends get in trouble. The DOE says it's because of more counseling. (Tell that to all excessed counselors.)The criminal behavior in schools has actually escalated because arrests have gone down. The principals are stopping arrests and pleading with school safety to do the same. Too many arrests and the school goes on the radar and the principal is removed. Look at Wings. Tremendous criminal activity with no arrests or suspensions. The activity escalated to the point where there were several assaults on staff last December. One teacher had severe injuries. He was so feed up he went to the media. Then the DOE and UFT spring into action. This year watch your back and have 911 on speed dial (many principals have forbidden staff from calling 911 for ANY reason).

chaz, you and I are in agreement about the disconnection of our union heads with the rank and file.

Safety just let got a contract. Same lump sum, not waiting till 2020. Pathetic

WTF?????? Somebody sue these pigs!!!!!!! All talk no action. All the intelligent teachers that write in here. DO SOMETHING!!!!

First has anyone received a class acton letter against the DOE? if not check your mail.

Second, I'm no big fan of Sharpton or the Union and to be truthful, teachers neither. The number of students of color failing tremendously speaks to me in volumes. We are all failing these students, especially the African American. I rest my case with the comments made by George. Hey just say black will you. Are you a white conservative?

I am leaning towards the comments made by Anon 5:30 and Reggie. Pogue's avarice comment is in the ball park as well. Critical thinking points of view.
I leave you with something I read today. It stated that we are suffering from Historical amnesia which has affected our ability to
critical think. And we must learn how to question that which we normally don't question, learn how to question that which we most take for granted.
Keep up the blog Chaz

Is what George said not true? Look what goes on in these schools. The verbal abuse, physical abuse, all by people who sit around, don't do an ounce of work, constantly break the law and live off of welfare.

Mulgrew desecrated public property by having a fling with a married woman in his shop class. Anyone else who did something like this would have been terminated. However he was able to rise to the top of the union. For this reason alone he cannot be trusted and is unfit to be union leader.

I'm holding the discontent in until I see what the cops, firefighters and sanitation get and how much is retro-ed etc. Then I and I hope others will rage.

Sue for what? A contract was negotiated, agreed to by president, members voted it in. It was lousy and I voted against, but voted in. All the other unions got better deals, but we agreed.

I never got the class action letter. Is this email or regular mail?

The UFT is corrupt.

OUR UNION HAS CREATED ALL THESE PROBLEMS BY AGREEING TO DISCRIMINATORY POLICIES AGAINST VETERAN TEACHERS.