Poverty Is Destiny For Too Many Children When It Comes To Academic Achievement. 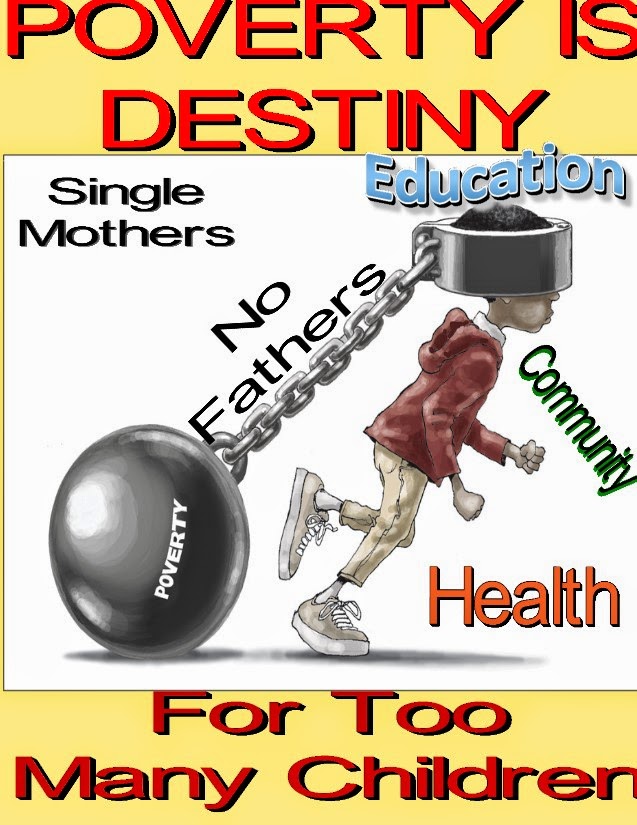 New York State Education Department proudly claimed that the Common Core based, high stakes tests showed that the small improvements were proof that their policy is working.  Of course, what NYSED failed to mention was that the State lowered the "cut scores" that accounted for most, if not all of the improvements.  Furthermore, many more students decided to  "opt out" this time. Finally, the NYSED Commissioner's conclusion that "poverty is not destiny" is not supported by the very information that he presented in the press conference.  Unfortunately, the NYSED data shows the continued inequality between Black and White communities that is reflected nationwide and shows up in the racial/income academic achievement gap.

Interestingly, the NYSED Commissioner John King said in "putting the lipstick on the pig", by hailing the results as showing that the State's education policy is working, I wonder what kind of glasses he was using to make that statement?   Moreover, he claimed that poverty is not destiny crowd has been proven wrong by the results.  Really?  He showed a scatter graph that indicated that some schools with high poverty levels did well.  Of course he failed to mention that the schools were either screened academically or were the Charter schools that have exclusionary policies to eliminate many of the poor performing or disruptive students before they reach the third grade.  The scatter graph does show that the deeper the poverty rate of a school, the lower the test scores.  It seems that Mr. King should go back to school and understand what his own graph shows before he makes claims that are false.  A column by "Ed the Apple" explains further about the State's flawed conclusion as Mr. Goodman shows that there were no high achieving schools in zip codes with deep poverty.  Furthermore, based on the NYS data, many schools in the predominately White/Asian District 26 had a 70% passing rate while the heavily Black District 27 had many schools that had close to a 0% passing rate!  No racial/income academic achievement gap there.  It must all be about the teachers Mr. King.

I think one has to look at what poverty is - in reference to the vast majority of students we deal with. Compare a kid (who has his own room, phone, IPhone , several pairs of Jordan sneakers, air conditioning, living in the projects going to any one of 95% of the city schools) with a foreign born kid who shares an apartment with 10 -15 people, wears the same (clean) clothes daily and tries to go to the best school possible ( the other 5% ). One would expect the first kid to do better, right? Wrong. The kid who is truly struggling does much better and is a much more respectful person. The big difference being a strong parent(s). The poverty we experience is emotional and spiritual poverty brought on by entitlement and unstable families. It's further enhanced with no consequences for outrageous and criminal behavior. Even a benign gift of free food gets turned into daily food fight. (It's free, throw it at a fat kid or teacher- you won't get into any trouble -"Johnny you shouldn't do that." "Suck my d--k, ni--er."). The DOE and UFT enable and perpetuate the status quo in a myriad of ways. 50 years from now you'll find the descendants of the same families living in the same projects. The descendants of the truly struggling kids will not.

Agree Bronx ATR
But we cant use a broad brush to label everyone. Labels are hard to remove I know that well.
The DOE and the United States as a whole are an entitlement organization. That is where the problem lies. Kids are lazy and WHO is at home to motivate them. Its about appeasement, blame the teachers and baby these kids. Its mind boggling that they are allowed to stay in the public school system until they are 21. God help us because our union cant

It is a tragedy that a student's home situation is not considered a factor in their education, just the teacher and no one else. The problem is that the school system has been controlled by bureaucrats who do not know a thing about pedagogy. Unfortunately this school system is driven by propaganda and misinformation. The bureaucrats are destroying the education of an entire young generation of Americans. The root cause of what is plaguing the school system has not been addressed. We need strong leadership at all levels of government and education to handle this crisis.

Not everyone, just almost everyone. Don't want to go back to this, but its the black, broken down, single parent family. All welfare, all extremely expensive clothing, material items...All entitlement, all give me, give me, give me, then they disrespect a teacher and expect a free grade. And of course no consequences...

Dear James,
None of this has anything to with race! It's because of what I described above.

Eric Garner, not to be rude, just want to bring up, 6 kids, 31 arrests, no job. About 50k in welfare plus food stamps plus housing? And I get to hear at work how the kids "about to get my income tax"-a tax refund on taxes they never paid, plus all other entitlements they get. To come to school and tell my to visit their penis. I wonder why the system is failing.

I just saw a proposal for the police to start using cameras.
I think this is an excellent idea
and should be extended to teachers. If a teacher is trying to do there job and keeps being interrupted by a student, that student is removed from the class. I for one would volunteer for it.

Michel Mulgrew . Get your ass in the class and start teaching. No more speaches. Earn your money. You certainly do not earn it as head of the union.

I know it will never happen but orange county just passed a bill to hold parents accountable to their children actually showing up to class. This is something that should be mandated in all schools and not just to show up. Its time to start holding these parents accountable who continue to feed into this on going cycle of self-entitlement, bail me out mentality.

To 12:54,
Those kids you don't want showing up.
They destroy your class. In NYC welfare is held back. They show up for a couple of days a week, shit all over you and your class and then it starts all over again. You can only hope for them to be incarcerated. No administrator, parent or social worker will help you. I've personally tried all and personal mentoring. Sometimes jail scares them and they then try- other times it makes them worse.

It IS about race!!! IT IS! Why is it that Midwood, Madison, Murrow and Lincoln have remained OPEN while South Shore, Canarsie, Erasmus, Prosepect Heights, and Tilden were shuttered? Coincidence?? Ummmm I think not. IT IS A RACE ISSUE. High schools who had a majority population of blacks, are all closed.

Stop lying to yourself that race is not a factor. Here's more proof....New Utrecht HS, Fort Hamilton HS, and FDR HS have all remained open under Bloombergs tyranny. Yet Bushwick HS and Jefferson HS were closed. Again, do we see a common factor with those? We sure do. Common Factor = blacks are NOT the majority of those schools.

And just wait till September 2, when we are told they expect college level questioning, and student should be asking each other high order questions. What about the fact that students cant read or write, are on drugs, don't show up till 10AM because they were drinking al night, don't care about graduating, have been arrested 35 times?

It is about race but it also is about equality. A paraprofessional has to show up to work 5 days a week and put in a 45 hour week to make 38k. Yet apparently the guy who died from the chokehold was making over 50k.....getting welfare. Ill say that again. He makes more money doing nothing than those trying to make a contribution to society. This sends the wrong message. As long as people like obama and deblasio and yes sharpton have power this will not change.

When teachers go back in the fall they will receive their rating. It will be interesting to see how the ineffective and developing teachers react. There might be thousands of teachers who will fall into his category. Mikey might have a big headache on his hands come September on top of everything else (lawsuit by the ex members over the retro pay, the punch you in the face comment, friction with the PBA leader and who knows what else). Teachers go back in thge fall to put up with another year of micromanaging. If I get this teachers do not have control over how to deliver instruction which means their rating is really the DOE's. I hope my colleagues get that.