The DOE Secretly Holds A Job Fair That Excludes ATRs. 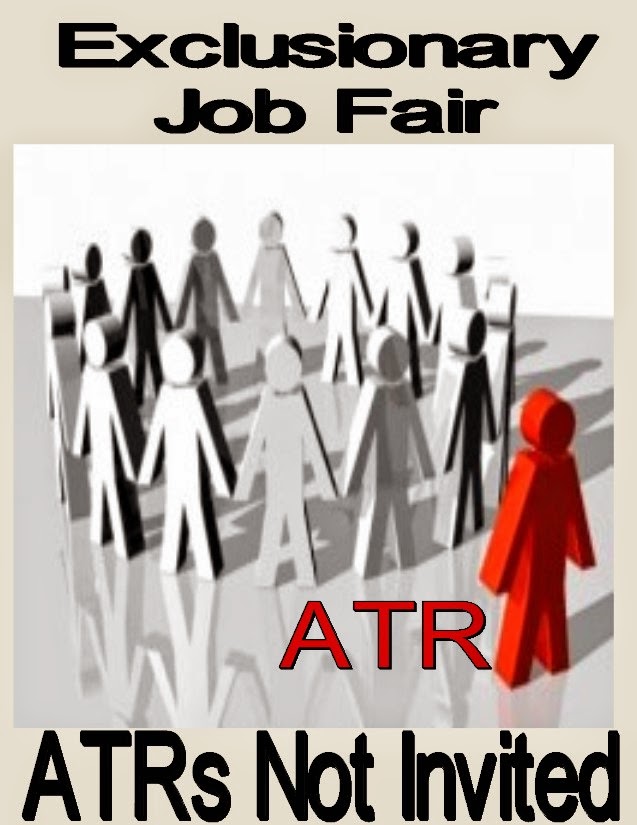 Yes, the same old DOE has once again, secretly held a job fair for the remaining vacancies in the school system and excluded the ATRs.  According to UFT President Michael Mulgrew this is supposed to be the new DOE attitude of cooperation and understanding that he bragged about. It seems to me that little has changed when it comes to the DOE.

The DOE job fair was held on Tuesday, August 26th at the Armory in Washington Heights and according to my sources the UFT was there as well which brings up the question why didn't the UFT object to this exclusionary DOE job fair?  The answer is obvious, the UFT aided and abetted the DOE in excluding ATRs so that the DOE can continue to claim that the ATRs are not looking for jobs.

Unfortunately, the UFT is more the problem then the solution when it comes to adequately representing its members.  Its the only municipal union that allows the City to bestow "second class citizenship" on some of its members and looks the other way when the DOE tries to punish the members a second time when they failed to terminate them in a 3020-a process. Is it any wonder that the ATRs don't trust the union leadership?

While I still believe in the protections union membership gives me, I realize that this disconnected UFT leadership  is not doing their job.  I need to rely on myself to uphold my rights and asking the union leadership to do their job is simply a pipe dream. To me its the same old "gotcha mentality" in the DOE and a union that looks the other way when its most vulnerable of members are targeted.
Posted by Chaz at 8:31 AM

Chaz,
This is reprehensible. Do you want to hear a good story from NJ? I was thrown out of a budgeted position in June. My new placement is back at the same school as EWPS (ATR). I can't wait to see that principal on Tuesday. I will be all smiles.

Chaz,
one of my friends who was an ATR was invited to that job fair. She was hired by a school on Wednesday. By the way, it is a terrible school that always has vacancies, but she is no longer an ATR. She asked me if I had been invited to the job fair. I replied no. How come some ATRs were in invited when the vast majority of us were not ?

The union leadership are a bunch of scoundrels and thieves. They take our dues and proceed to sell us out. The union may have a big problem next week when teachers get their ratings. Chaz your article from last summer (August 1, 2013) says it all. This evaluation system will harm teachers. Perhaps something positive will come out of this (a more involved membership).

Teaching in NYC is being formatted as a 3-5 year career. Everything that's being done to seasoned and new teachers is that process being formalized. Wait out the ATRs until they're gone. Make sure tenure is very arduous. Those that make it through - use and abuse them. Then start rating them ineffective. They don't know their rights and have been systematically selling them back to the city. All the sacrifices of Shanker and those former union members (that should be remembered this Labor Day) are lost. Most teachers take these rights for granted, but will learn a very hard lesson, very soon. The Union, as it now stands, could care less. The dues will keep rolling in, as the revolving door of teachers and ex-teachers, spins like top.

We in the NYC public schools are not alone in our misery. Teaching is no longer a viable career profession. At best, it’s a Kelly Girl temporary stint of a few years. This article from Catalyst Chicago touches many points which have become all too familiar to us.

Comments for this article:
A retired Chicago principal wrote:
“…They will also need to navigate in a system that is not supportive, shows little value for you, makes you jump hoops until it is painful, and will want you out once you cost too much….

Teacher wrote:
“…The simple fact is that teachers are vilified, are unappreciated, are unsupported, and are being robbed of pensions in this state. Why would anyone sign up for a career like that?...”

Anonymous wrote:
“I've told both my children not to go into teaching. And I'm a teacher. It's just not worth the sacrifice anymore.”

Anonymous wrote:
DO NOT GO INTO TEACHING
As a veteran minority teacher, I tell anyone reading this what I told my daughter: DO NOT GO INTO TEACHING… the important thing is that teachers are mistreated, told to do things that are bad for kids and illegal, and if you stand up for your students you will be hounded and mistreated. If you work more than 10 years, then you make too much money and the schools try their best to get you to leave… People who are not educators will come in and tell you what to do in your class, and it won't make any sense…RUN RUN RUN and go into some other profession.

Karma wrote:
“CPS (Chicago Public Schools) has highly educated, credentialed, experienced, displaced, veteran black teachers on staff as substitutes. The teachers are shunned by their former colleagues, get paid like custodians, and are seen as irrelevant as them too. DON'T TEACH!”

I have been teaching for 19 years. A few years ago, my daughter started making noises that she wanted to go into teaching. My husband and I sat her down, with her brother, and said, essentially, that if either of them chooses to go into teaching, we would not pay a SINGLE PENNY toward their education. Not only that, but they would not be able to live with us and all financial assistance from us would immediately cease. Neither has mentioned teaching as a career since.

my daughter wants to be a teacher. I told her to go for her Administration license so she can be one of THEM...the little witch is mean already

"...Fariña pledged to announce in the next two weeks a big reduction in the number of teachers getting paid despite not having steady classroom jobs. Earlier this month 114 of the roughly 1,100 teachers — known as the Absent Teacher Reserve — accepted $16,000 buyouts.

Fariña said the numbers would dwindle further as principals are taught best practices for writing up teachers and beginning the arduous termination process."