The John Hopkins Study Shows That Family & Poverty Are The Major Factors In Academic Achievement. 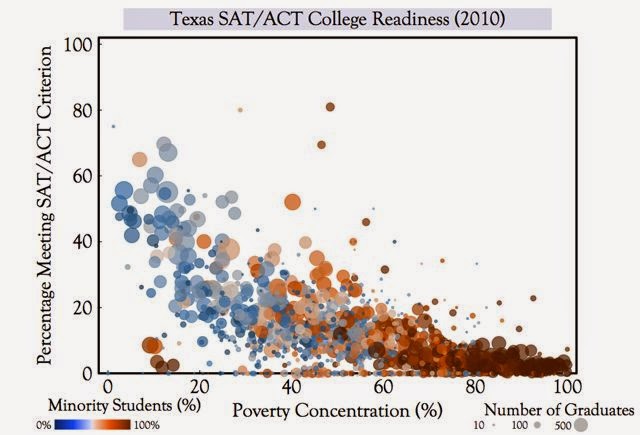 This June, John Hopkins published a study called "Children's Life Trajectories Largely Determined By The Family They Were Born Into".  The study showed that the family and poverty were the most important factors in determining a child's fate as an adult.  This study followed 790 children in Baltimore as they entered first grade in 1982 and ended when these children became 28 or 29 year old adults in 2004-05.  The results were disappointing if you are an education reformer since it shows that the two major factors were unrelated to the school the child went to.  The two factors are family and poverty. You can hear the study Here.

The John Hopkins study just reinforces the many previous studies that show that a child's social economic factors were the major factor in a child's development.  Most of these studies show that the school environment contributes to anywhere between 10-20% of a child's academic achievement and some studies show an even less of an impact. Obviously, the John Hopkins study supports this as well.  Sure, that an amazing teacher is nice to have but the major driving force for students are outside the classroom and lies with the family's financial condition and the community that the child grows up in.

The John Hopkins study found the following from children who grew up in low income backgrounds:

The study convincingly shows that growing up in a low income family makes life difficult to find success as an adult.

That brings me to the education reformers who ignore the major factors of family and poverty that accounts for 80% or higher of a child's fate and instead concentrates on eliminating teacher tenure and "due process rights" as if that will magically result in better student outcomes.  Of course as any educator knows it won't. If Michael Bloomberg, Rupert Murdock, and Bill Gates really want to help students as they claim, then they need to use their wealth and influence to eliminate poverty and improve access to good paying jobs and most importan tly, keep the fathers as part of the family rather than relying on single mothers to carry the load.  As the graph above shows, the deeper the community is in poverty, the lower the academic scores the children produce.   The Annenberg Institute report showed almost the same correlation for New York City when they used communities Ignoring the effect of family and poverty and blaming it on teachers is not only wrong but results in the continuing failure of these cohort of child as they advance through the education system without the proper and necessary family and financial support necessary to narrow the academic achievement gap.
Posted by Chaz at 3:29 PM

I bet mulgrew wants to punch John Hopkins in the face

Mulgrew's pugilistic remark reminds me of the time Tom Bennett, a new Brooklyn Borough rep, flipped out at a Feb. '13 chapter meeting at the School for Legal Studies saying, "I'm gonna get Mulgrew to come down here and he'll beat the shit out of you." When both refused to apologize, I felt obliged to report the incident involving a physical assault as well, to OSI. Thereupon Bennett was fired from his aggressive UFT gig sent back to Staten Island Tech.

This is the same Phil Nobile who wrote for Hustler magazine and who would gladly turn on any teacher to get some press time.