DOE Wastes Over A Billion Dollars In Trying To Get ATRs To Leave The System. 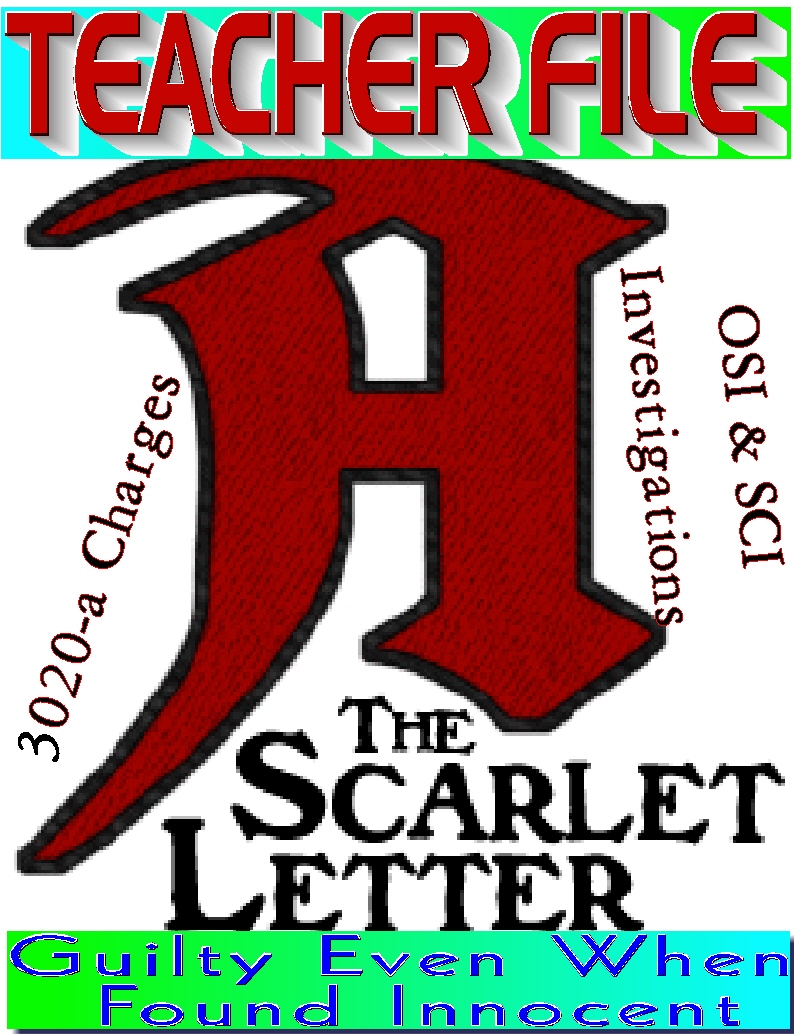 In today's New York Post, an article was written on how the DOE has wasted over a billion dollars since 2005 to get ATRs to leave the system but for the most part, failed to do so.  The article was light on facts and didn't really discuss-the ATR issue in detail.  However, the article reflected the DOE's frustration of paying hundred of millions of dollars annually in the last eight years to keep the ATR pool rather then putting them back into the classroom where they belong.  The NY Post article states that the DOE's ATR buyout, that ends tomorrow, is expected to be an utter failure with few ATRs actually taking the inadequate buyout.

Interestingly, the DOE told the New York Post that while all vacancies posted after October 15th must be filled by an ATR, the Principal has the right to remove the ATR from the position after only one day for no reason whatsoever.  Moreover, the DOE apparently told the New York Post that "ALL TEACHERS WHO WENT THROUGH THEIR 3020-a PROCESS AND WON HAVE A PROBLEM CODE ON THEIR FILE!  That's right the ATRs have their own "Scarlet Letter"!  That means that principals who look at an ATR's file will see the "red flag" on the file and will not offer the vacancy to the teacher no matter how qualified the teacher is.

Unfortunately, the article didn't explain the "fair student funding" that discourages principals from hiring teachers due to their high salaries or that the four "job fairs" this summer excluded invitations to ATRs to participate in.  While James Eterno was quoted, it consisted of  a two sentence statement that said the DOE's policies will not eliminate the ATR pool and the ATRs need to be placed. Otherwise, the article was slanted to the DOE's position.

Finally, the ideological slant of the New York Post was obvious in this article as they called the ATRs "outcasts".
Posted by Chaz at 10:34 AM

Hi Chaz,
As you know, I have always found the Post to be extremely offensive and biased. This article was not. Like it or not we are "Outcasts". The fact that the Post used the term was an example of the article being unbiased. The unmentioned fair student funding and the incorrect number of ATRs were the only faults I could find with it. Maybe the tide is starting to turn.

Stupid morons. They should have spent that money giving us live able buyouts and this would no longer be an issue. Instead they bleat how much it's costing them. If they pruned some of the no bid contracts and got rid of the lawyers perhaps they could save billions. Tough shit.
Old enough to be disregarded.

Chaz,you write "the DOE has spent over a billion dollars since 2005 to get ATRs to leave the system ... ."

But the Post article does not say so explicitly or implicitly. Please clarify.

"outcast" is a derogatory description. Furthermore, the NY Post article didn't go into detail about how many ATRs there really are (2,400+). It accepted the DOE view rather than independently research the subject.

The only way to resolve the ATR mess is to place US ALL regardless of salary
Those who cannot cut it as teachers should eventually leave this insane
asylum
We cannot have a DOE where there are second class citizens. Our union has got to fight for the ATRS we are teachers that do not need to be hired WE ARE ALREADY HIRED...I admire everyone that contributes to these posts because our voices cannot be silenced..Teaching and Tenure is being attacked and even though the union sold us out we cannot go out quietly..keep up the good fight

Chaz,
I'm not criticizing your math on the ATR money, but the motive you attribute to the DOE. The Post says nothing about a billion $ spent to get rid of us. This is a leap, no?

ATRs are no longer impacted by fair student funding under the new contract. From now on principals only pay the average building salary if they higher an ATR with a more expensive salary and Central covers the difference. I find it funny that you never mention this in your many posts about ATRs and FSF.

Here is the reality: The DOE proposed the whole ATR concept back in 2005. It was their idea plain and simple. It is quite ironic that it is the very same DOE that is now complaining about how much it costs. The DOE needs to take ownership of the ATR situation or put a better deal on the table during the next contract. In the meantime they have no right to be bitching about how much it costs to keep ATR's on the payroll.

Let's see, the DOE is complaining about the costs for ATRs. There has been between 2,000 to 3,000 ATRs at the begining of the school year and if we reduce that number by half at years end, it still; comes out to over 150 million dollars a year. Multiply that by the eight years it comes pout to 1.23 billion.

You are so very wrong! The "fair student funding" is still in effect, its not used for the first two years for ATRs but is required if the school keeps the ATR for a third year.

If you read my November blog, you would see that the average teacher salary is still a disincentive for hiring higher salary teachers.

You fail to understand that Central only covers the difference for two years not for any years after that!

Not biased? Does it explain who created the ATR pool? Does it say how most teachers became ATR's does it explain that every big school had been closed? People don't know this. When I tell someone the schools are parents and grandparents went to with names Taft, Gompers, Evander, Kennedy, Columbus, Stevenson, Monroe, Taft have all been closed and there like seven mini schools in the building with names like Academy of Vision for Humanities and Writers, they have no idea. They also weren't aware three year teaching principals run these schools. Does the article state any of this? Does the article state--and therefore present the truth--this could have all been avoided if a teacher excessed in a closing school could have simply been placed in another school? But like you say, the article is biased,

Chaz,
You have no evidence that the DOE is trying to eliminate ATRS by paying them a billion $. Yes, they've paid us a billion and yes they'd like to quit. But where is the evidence of cause and effect?

To Reggie,
Most newspapers won't write an article that large. The UFT could. I've never read anything in that monthly tampon they send out. We need an article with the history and current situation explained. This could be used for the public and newbie teachers.

I embrace my outcast status. I would prefer that term over "Sub" any day of the week. We have been cast out by our schools, our union and from our profession. I WILL NEVER QUIT! F--k you Bloomberg, Weingarten, Farina and Mulgrew.

Nobody seems to factor in the money each school saves by using senior experienced teachers as substitutes.
The institutionalized sadism has flourished since the election of the midget. It continues under the new administration.
The propaganda machine of the DOE, Gates et.al, has demonized and vilified the members of the ATR cesspool to such a degree that our own union brothers and sisters voted to reduce ATR due process rights and the 14th amendment under the Constitution.The UFT has engaged in destroying the profession in direct collusion with our enemies the corporatization and fascist ed deform thieves .
Short of decertifying the union and tossing the parasite class into the unemployment line the alternative is litigation. The UFT is a better target not only because of their greater culpability, but, because they. Don't have endless funds like the city. Also, they are bigger crooks and liars than our employer. A strike will never happen because this requires bravery that doesn't exist in teachers.

Hey Noblie, what chaz is saying is that the DOE has tried for many years to terminate ATRs. Did you forget the LIFO bill? How about Joel Klein's time limit?

What chaz is saying that the DOE has wasted over a billion dollars trying to eliminate the ATR pool by coming up with ideas to terminate them.

"All That Is Necessary For Evil To Triumph Is For Good Men To Do NOTHING."
Edmund Burke
I'm waiting for someone to initiate a lawsuit. Chaz?

You are not getting it. Chaz is explaining the $ already spent by the DOE to get rid of the ATRs.
Over a billion sounds right.
Nobody --except you--reads this as DOE is paying the ATRs a bilion $.

it does not follow that the two are directly connected.

Additionally you lie about ATRs and Fair Student Funding. New contract says that "Any school that selects an ATR for a permanent placement will not have that ATR’s salary included for the purpose of average teacher salary calculation." So if ATRs are no hired this year it has nothing to do with their salaries. Perhaps it will have something to do with their competence.

All that is required is 25% to decertify the union. Any lawsuit against the union will be thrown out, (members can't sue their own union).

I was given some very bad advice from the Uft lawyer. I was brought up on 3020a charges that were capricious, arbitrary and easy to refute. I was advised to settle and agree to resign/retire at a specified time in the future. My issue is is that I was told I would go into the Atr pool and be treated like any other are. THAT DID not happen. There is a red flag next to my name and I am not able to able for short term vacancies , etc . I feel like I was taken by both the DoE and the UFT. If there is anyone out there who is being brought up on Rediculous 3020 charges, my advice is to NOT settle. I will regret this forever.

Anon 11:38. I know a teacher with almost 30 years in. He was targeted and forced to resign. The hearing officer threatened he would lose his pension if he didn't resign which is a lie. His NYSET lawyer did nothing. Always get your own attorney. Don't trust anyone involved with the 3020-

Who is the uft lawyer? Give us his name, so we know who he is