On Tuesday Wear Blue To Support Our Fellow Union Members In The NYPD. 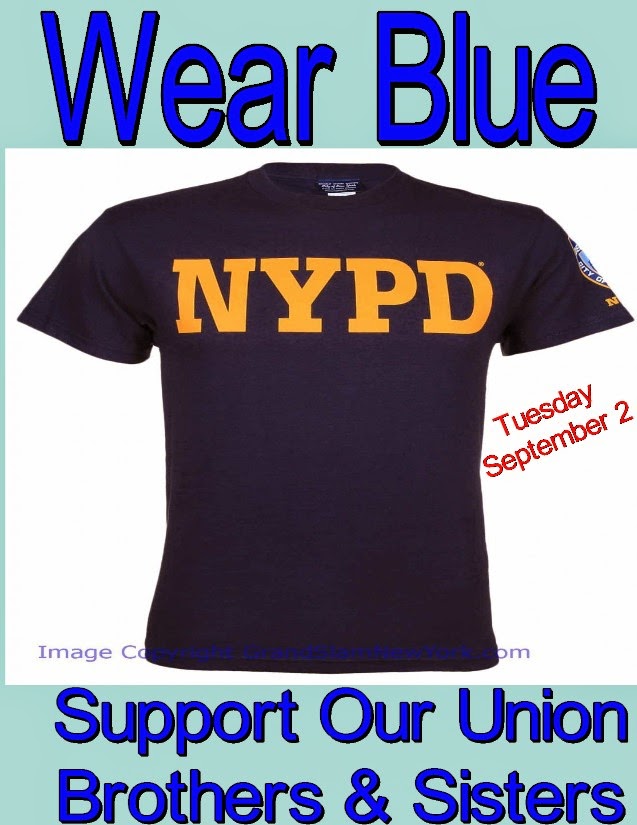 Outside of our union leadership, the ultra-leftist elite, and racial arsonists, there is a groundswell of support for the police and the difficult job they do to keep our big city safe.  I remember how scarey it was to walk in the city at night and in some neighborhoods at any time of the day in the 80's and 90's but thanks to the police officers and their dedication to make our streets safe, that's just a bad memory.   However, our President, Michael Mulgrew, and his lackeys unwisely used member funds to co-sponsor Al Sharpton's anti-police march in Staten Island last weekend.  Its time that the rank and file of the UFT show their appreciation and support of our fellow union members by wearing blue on Tuesday, the first day of school.

The idea originated from teachers in Staten Island and I strongly support the wearing blue campaign and it won't cost any union member one red cent.  Please show your support for your fellow union members by wearing blue on the first day of school.  I will.
Posted by Chaz at 8:40 AM

I don't think newbies know how awful Times Square and NYC in general were in the crime-infested late 70's thru 80's. It seemed NY would just continue to spiral down. Thank goodness for our NYPD.

Thanks, I will be wearing blue on Tuesday.

Congrats, Chaz - and I say this as someone who refused to march in Staten island because of Sharpton's presence - you're now officially identified with the gentrification/White Backlash wing of the UFT and teaching profession.

I hope you continue to feel the same crush on your NYPD "union brothers and sisters" if/when one of them is called upon to investigate/arrest you, based upon the claims of some vindictive Principal or student.

See how much "solidarity" they show you then.

Anyone read the last 2 paragraphs of Farina's plan in Daily News article???? Blatant plan to go after the ATR's. Please read. This has to have legal ramifications, no?

Here is a Labor Day quotation from Mark Twain I think it's appropriate today as it was when Twain first wrote it.

"At first God created idiots. That was for practice. Then he created school boards."

Just as administrators were once UFT union members who turned vindictive as principals so are police officers who leave the NYPD and sellout as SCI investigators who are, by the way, non-union.

I have experienced first hand, the lies and perverted statements that SCI clam were true and I have no respect for these people once they work for the DOE.

Your friends the police came to my old school when the principal trumped up a bogus charge on a teacher who in sitting a girl who ran out of the room repeatedly in her seat - yes 5 cops in the middle of the day - they didn't even look at the child - took the teacher out in handcuffs and didn't release her till the middle of the night - when she called me - a social justice guy - for help - and yes, me a social justice guy did help - arranging press for her and taking her to ex bd meetings. In essence you are attacking me and defending the cops who will arrest your ass in a minute. Ask Patrick Lynch if he did one thing to defend teachers who are under assault. It is we social justice people who believe in the defense of people wronged - teachers, students and parents and yes, people who are choked to death. I wonder if it was one of your students who was lying dead in the street if you would feel the same way. Instead of wearing blue wear handcuffs.

Not everything the police do is right and any occupation has there own horror stories,. be it police, teachers, or other municipal[al workers. The bottom line is that no union should be protesting against another union. As a trade unionist, what the UFT did is reprehensible.

I agree with you that no union should go after another union. As an old trade unionist and Socialist, I found it highly disturbing that the UFT would support and actually sponsor the Al Sharpton march against the police.

I know that we have different philosophies and politics but in this case the union was wrong and this is the inevitable backlash for their decision.

Chaz, I support your position and am no friend of cops.
It is very very bad precident to set by standing against another municipal union.
Mulgrew had already set another bad precident for all of the municipal unions by agreeing to the crap contract.
Social justice is key to a functioning society not the domain of a fledgling union caucus. Unfortunately the term social justice is misconstrued by the majority of members. At the end of the day the social justice banner is divisive to the cause of protecting our members. We want to gather in, not exclude or alienate, as many members as possible.

Doesn't Farina's plan to target ATRs demand a response from our union? The same union that garnishes my wages and sticks its nose into other unions business. The same union that negotiated a terrible contract, continually lies, and has created a sub-species of teachers. Wear a tee shirt with a large X over Mulgrew and Farina hugging. I don't give a crap about the cops or Sharpton (he'd be a great union president!).

Did all UFT members get invited to the protest in Staten Island? I never received anything.

Its time for charter police. Why should teachers have all the fun

Todays comments by Farina should be enough for a lawsuit. Unfortunately the union made a side deal with Farina to terminate the ATRs.

You speak for many of us and no union should be protesting against another union. The exception being the CSA since they include many vindictive administrators who terminate too many teaching careers.

I remember reading that it takes only a 25 percent vote by the membership to dissolve the union. Where do I sign.

Why dont we email Amy Arundell and remind her that she should be sick that a Chancellor would be quoted as saying that she is teaching principals how to terminate ATRs?

And the UFT says nothing about any of this? The new $2000 to new teachers. What Farina said...Amazing.

Farina continues to say NO FORCED PLACEMENT, yet we are forced to go wherever...

Great post Chaz.-keep up the great work. Good to see that you do not fall into the " leftist" category.

Chaz, do you know the name of the UFT form/log a teacher uses to document administrative harassment ?

You need to start an anecdotal log of the administrative harassment and file a "Special Complaint (article 23). I know of no specific log form for this.