How long Does It Take For A 3020-a Hearing To Result In A Decision? 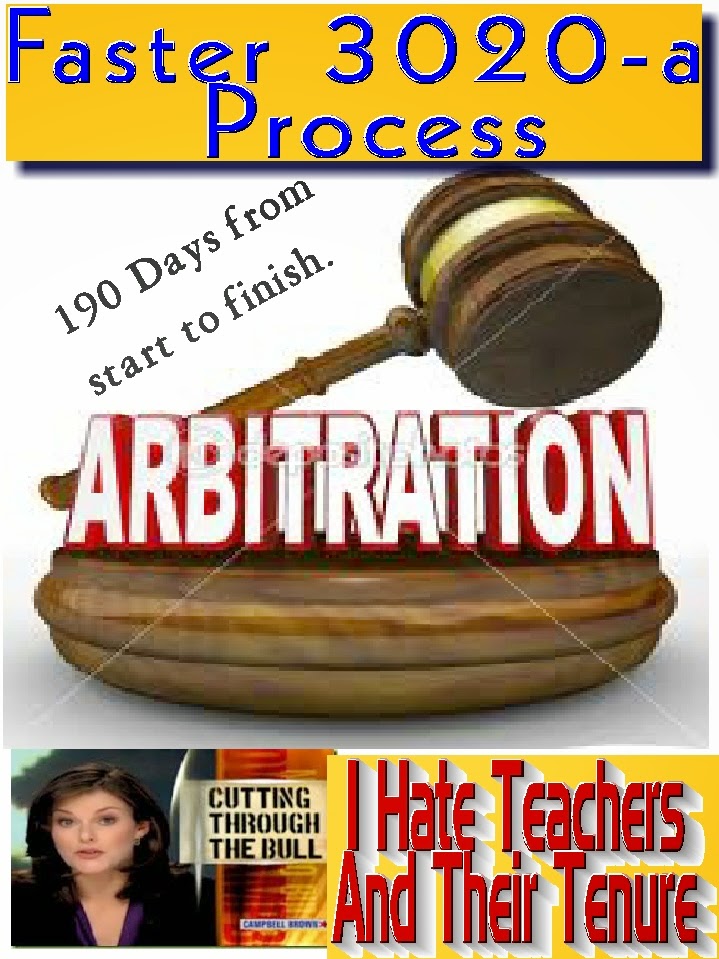 I was watching the Colbert Report with the clueless Campbell Brown who told the host that it takes an average of 830 days to get rid of an incompetent teacher.  However, like usual, she got it wrong.  She was using old and outdated data from 2004-08 and these figures were not the average but the longest cases it took to get a decision   According to the State School Board Association, the average tine for a decision during this time period, from start to finish, was 520 days and excluded New York City cases.  The latest data shows a much swifter 3020-a process and that for 2013 it took only 177 days to complete the State 3020-a process, including a decision, and 190 days for the New York City cases (the union claims its 150 days for the last two years 2012-13).

It would appear that if Campbell Brown tries to use the lengthy 3020-a process as a major factor for her lawsuit, it will fail since the days when it took two or more years to reach a decision is a thing of the past and for most educators the entire 3020-a process rarely goes beyond a year.

This is yet another example of the clueless Campbell Brown using  outdated and false statistics to try to prove her case.  Interestingly, in her long ago cancelled cable show her slogan was "no bias, no bull".  However, she violates that slogan by advocating for school districts to terminate teachers for any reason and at any time without giving them their "due process rights".  What a hypocrite she is.  For her it's not children first but to destroy teachers and their tenure, plain and simple.

Her name doesn't mean "Crooked Mouth" for nothing.

I just watched the Colbert show with Campbell Brown. The woman has no credibility. If she's doing the right thing she would list her donors, not hide them. She wants to protect them from us?! We can't even defend ourselves adequately from our own union. The union should hire her, she's that f--ked up.

Hey Bronx...I saw the Campbell Brown interview as well. The woman wants to help kids, protect them from us evil teachers. She should be lauded.

Bronx ATR
love your last line
"The union should hire her" WHERE THE HELL IS OUR UNION ??WHAT IS ALL THE HATE TOWARDS TEACHERS ???You cant even enjoy a summer break without watching the news or picking up a newspaper and seeing the garbage that is thrown at teachers. Bad enough we have to take this bullshT from students,administrators, parents and yes even our own co workers but enough is enough. I have to wonder how we can keep a positive attitude when it seems everyone is against us. Our union, the organization that takes monthly dues from us, continues to stay silent while their members are bashed daily. I know one thing my daughter is getting ready to go to college and sadly I told her DO NOT BECOME A TEACHER I can thank our UFT

A lead attorney in the current anti-teacher tenure case has no problem with bad government doctor decisions in the FDA. Jay Lefkowitz successfully argued in defense of Mutual Pharmaceutical, in a 5-4 Supreme Court decision.

The original litigant suffered disfiguring skin damage, with burns over 60% of her body, lung, esophageal damage and became legally blind.

Lefkowitz defended the manufacturer, by deferring to the [bad] decisions of the FDA doctors. Read my post "Key Attorney in NYS Anti-Tenure Case Was Defender of Maker of Flesh-Eating Drug Whose Maker Benefitted in Supreme Court Case" for Breyer and Sotomayor's dissents.
New York City Eye

Why my denial of completion of probation is unfair:
I Mr. MD Nayeem Khan was a probationary teacher for the last eight years, among them for the last five years receiving satisfactory reviews and reports for each school year. Instate giving me the tenure she offered me the Assistant Principal’s position. I declined her offer that I would not want to be a leadership position because I love teaching. Then I agreed to extend my probationary period into the 2013-2014 school year. This year I received two unsatisfactory and two satisfactory classroom reports. The principal gave me a satisfactory rating for each category within the year-end report resulting in a Developing-rating for the 2014-2015 school year. After that, I was then denied certification of completion of probation which required my termination and disallowed me from being hired elsewhere in the City [I found out later].
188X’s Bronx, Principal Ms. Johnson discriminated against a Teacher who was nominated THE BIG APPLE Award nomination for the year 2014-2015 and dismissed me because of my activity as a United Federation of Teachers SLT leader, as NYCDOE’s administration this Office of Appeals and Reviews committee need to rule today, while ordering that I should be reinstated with tenure and more than seven months’ back pay.
I Mr. MD Nayeem Khan, who taught fifth grade to twelve grades for special education students at P.S.188x in Bronx with Math Professional Certificate from September 2010 to June 2015, Appealed to You the Department of Education’s Office of Appeals and Reviews over my dismissal, which occurred while I was still a probationary Teacher. I think the following three major reasons my Principal retaliated to discontinue me are as follows: 1. Principal Ms. Johnson’s Union-Related Animus toward me, 2. Principal Lost It with clear sign of Superstation by making bad decisions, 3. Clear Signs of Retaliation.
Please advise me, what can I do now: mnk125@yahoo.com