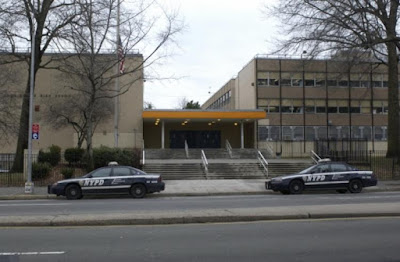 John Bowne High School is a high school thatis located in a leafy Middle-class neighborhood in Flushing and has a diverse student body and theoretically should be an attractive high school for students.  However, there has been a disturbing spike in violent incidents and weapon confiscations at the troubled school.over the last three years.  Just last week, a student was knifed by two other students at the school, a police officer was punched by another student,and the Principal Howard Kwait has cost the DOE over $500,000 in settling two lawsuits by female assistant Principals and a female student who was falsely arrested.  Moreover, he was fined by the City's Conflict of Interest Board by accepting a trip by a female subordinate overseas.  Finally, Mr. Kwait has been accused of changing grades, and retaliating against whistle-blowers which resulted in another lawsuit by a male Assistant Principal this year.  You can read all the unsavory details Here, Here, Here, and Here.

While the school has some great programs in Agricultural and Veterinary Science, it struggles when it comes to their "college and career readiness" scores which is below the citywide average.   You can see the school's snapshot.

The student population of the school is half Hispanic, and one quarter Black and the other quarter Asian, mostly South Asian. Many of the neighborhood's middle-class students that would normally go to John Bowne High School if high school zoning was still in force, end up in the nearby better schools of Francis Lewis, Thomas Edison, and Forest Hills.  Instead many of the student body come from Southern Queens and unfortunately, brings with them the culture of violence and disrespect for authority.  With Martin Van Buren a Renewal School and the Jamaica campus schools deteriorating and not attracting students from their neighborhoods, John Bowne continues to get many of these lower academic achieving students and hence, a rise in violent incidents and weapon possession.

Are the high schools becoming safer?  Yeah right and I have a bridge in Brooklyn to sell you.

The only thing our leaders cares is if the gradustion rate going up, any method in achieving. Even if the students are not ready to pass. It id a sign we are really going in the wrong direction.

According to Open Market ATRs are no longer excessed. How come we can't get some information from the UFT? I'm dropping my COPE
payments Mulgrew.

The UFT is not in the business of helping teachers. They just want new teachers, and the graduation rate to go up by any means.

I worked at a school in the Bronx. It was chaos every single hour of every single day. You know what I'm talking about. The kids were dumber than doorknobs, but boy could they raise a ruckus - everywhere! The school is still open and makes John Bowne's problems look like nothing.

That's 95% of the schools in the Bronx. They give door knobs honors if you turn them the right way, but they certainly aren't polished.

As long as the graduation rate goes up by any method, Fariña and Mulgrew can say everything is good. What a sham!