Monika Garp, Another Principal That Shouldn't Be Running Her School. 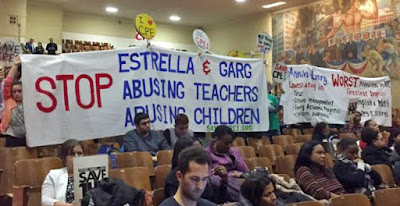 Two years ago the DOE, without the approval of the school staff, the community, or the parents of Central Park East 1 elementary school, installed a new Principal in the legendary progressive school.  The new Principal is named Monika Garg, who came from the embattled Pan American International High School as an Assistant Principal under the infamous Minerva Zanca who was indited for racial discrimination for her actions during Ms. Garp's time at the school.  How in the world could the DOE allow a person who was tainted with the racial discrimination issue at her previous school, get promoted to be Principal herself is mind boggling.  Yet, the unaccountable DOE did make her Principal through the flawed C-30 process, despite all the negatives associated with her, lack of community, parent, and staff support, ran a failing school,and of course the alleged racial discrimination issue.  Time and again, the DOE puts people in charge of schools with a checkered past.  Just look at Townsend Harris and Forest Hill High Schools?

Since being appointed Principal, Monika Garp has targeted the veteran teachers of the school and has started investigations against any teacher that speaks out against her.  Ms. Garp's trust and communication factors, according to the school's latest snapshot is "0%"!  The lowest in the City.  Yet the DOE continues to keep her in charge, go figure.

This week the parents occupied the school overnight and demanded that the Principal step down.  Moreover, last June, parents and their students staged a walkout and demanded that Ms. Garp be removed as she was destroying the progressive school culture.

According to Ed Notes Online, who has been writing about the CPE1 saga.  Ms. Garp has been targeting the veteran teachers of the school and has even sent the Chapter Leader into a 3020-a hearing.  You can read it Here and Here.   Finally, see the timeline from the beginning of Ms. Garp's selection till November of 2016, just before the Chapter Leader was removed in December and is a must read.

Its time for Chancellor Carmen Farina and her appointed Superintendent, Alexandra Esrella, to admit their terrible mistake in selecting Monika Garp to be Principal of a school that she knew nothing about and remove her for the sake of the students and the culture of the school.
Posted by Chaz at 11:04 AM

It seems like the DOE studies the data on schools to see which schools have a higher percentage of veteran teachers.
If a school does, the DOE sends the dogs in.

The blame rests with DeBlasio. End mayoral control of the schools.

The only reason I can fathom Farina leaving these "principals that have no business running schools" in power, while terminating teachers for the slightest transgression is their respective unions. The CSA has real power and Farina knows it. The UFT is a complete joke and Farina knows it. I wish Mulgrew was the president of the CSA and we had Logan. The UFT is quickly approaching its demise.

Gorsuch's appointment will lead to the demise of the UFT with the upcoming union dues case before the federal courts. Can't wait for it to happen.

FARINA IS A PIG! WORSE THAN BLOOMBERG AND KLEIN/BLACK/WALCOTT COMBINED!

Agreed it is systemic age disctimination.

Fariña likes principals that get rid of older teachers, and hire new ones.

Until you published the school's snapshot, I thought that her staff ratings were exaggerated but its true, Monika Garp got a 0% trust factor.

Chaz, here is the link to DOE's "Statistics & Budget" page for CPE 1:

It would be good to review the relevant documents, and then send Monika Garg an email, copied to the Superintendent, Chancellor, Mayor, City Council, Public Advocate, UFT officers, and CSA officers, informing them of what must be done in order to make CPE 1 into a "happy place."

Publish the email here, and let Monika know that you will also be publishing her response (or lack of one).

That should get things moving in the right direction.

Dwarka is an expert in getting older teachers out, and also in bringing the school to the ground. Fariña likes these type of principals on a destructive mode.

I already linked the CPE1 snapshot.

The Trust column is also an indicator of teachers. You seemed to fail to mention that only 29% of teachers trust each other. Seems like the teachers and the leadership are the problem

Anon 10:00
True, but the parents are protesting against the Principal, not the teachers. Moreover, the poisoned atmosphere from the top spreads school wide..

She is yet another "devisive" principal. Devisive, as in divide. Pit the teachers against each other.

Toxic environments, age discrimination and abusiveness is encouraged from the top down. Fariña and Mulgrew should retire.

She was my AP for two years before getting this school she is now ruining. She was so awful. Not a single teacher liked her. She lied to our faces. Made stuff up. Was incompetent at planning things and loved to act like a goddess.

There are many bad principals destroying our schools because Mulgrew and Fariña want this to happen. They should be ashamed of themselves.