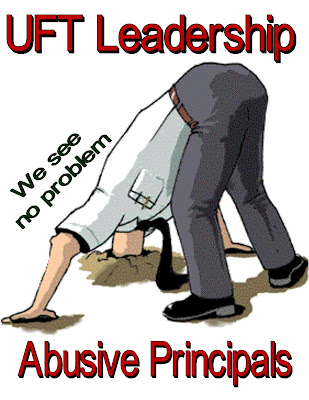 Over the last three plus years since Mayor Bill de Blasio took over as Mayor, our union leadership has played nice with the progressive Mayor.  When he selected the anti-veteran educator, the disappointing Carmen Farina as Chancellor, our union President Michael (don't call me Mikey) Mulgrew said there was a new tone at Tweed. Of course, it was the same old song at the schools with frozen budgets, a "gotcha system" and the punitive Danielson Rubric in place.  Worse, was the continuation of the Bloomberg policy of protecting abusive principals while going after teachers.

Remember Carmen Farina was Deputy Chancellor for Joel Klein and her claim to fame was to remove most of her veteran teachers when she was a Principal at PS 6 in Manhattan. The new Chancellor showed her true colors by retaining 80% of the Bloomberg policymakers in place rather than clean house.   Moreover, when she outmaneuvered our hapless UFT leadership in the 2014 contract, she targeted veteran ATRs for termination and veteran teachers in the teacher evaluation system.  She even told new teachers to stay away from those complaining veteran teachers in the teacher's room.This is the person that our UFT President was having a love affair with.

One thing that didn't change with the new Mayor and Chancellor was the union leadership's failure to go after the many terrible principals running the schools.  Be it Monika Garg (trust factor 0%) of CPE1,  Namita Dwarka of William Cullen Bryant High School (trust factor of 28%), or Eujin Iael Kim (trust factor 39%) of PS 169.  Instead of organizing protests against these terrible principals, our union leadership lamely claims that they don't go after fellow union members.  Of course, it didn't stop them from joining demonstrations against the police, also fellow union members.  Instead, the union leadership claim they quietly put pressure on the DOE to replace and remove these principals.  However, few members believe them and the only principals that have been removed are those subject to media scrutiny and student protests like that  at Townsend Harris High School.

At least under Randi Weingarten, you had the Principals In Need Of Improvement (PINI) articles in the New York Teacher newspaper and occasional protests at schools with especially terrible school leaders.  However, under Michael Mulgrew there are no union directed or supported protests or articles about the many principals that shouldn't be running their school. In fact, the actions of our union leadership suggests that they care little about the members who are subject to these principals actions.  How else can one explain their inaction in the CPE1 saga or the Townsend Harris situation?

I was brought up on a verbal abuse complaint. OSI did not take it so it turned into a principals investigation. I contacted UFT office as soon as the charges were brought up. Guess what? They never even got back to me. No representation other than my chapter leader. And yes, I am a veteran teacher. UFT wants my dues? Why should I pay when they did nothing for me in my time of need.

Namita Dwarka from Bryant HS is #1 and also the town bike of the DOE.

For some reason no laws are applied to her.

Even the Chapter Leader of W.C. Bryant High School was harassed until he left. The UFT stayed silent, and did not support any rallies.

The Union did not even do anything for the latest Chapter Leader of Bryant High School who was harassed until he left. He was a well loved teacher who was there for around 20 years.

The Queens UFT Office is the absolute worst. Rona Freiser, James Vasquez and company are incompetent, spineless people. You ask them for help and they tell you there is nothing they can do. Then they contact the Principal either directly or through their snitches to tip them off that a complaint has been made against them. I speak from first hand experience. I needed assistance with a situation and when I finally spoke to Vasquez ( after he did not respond to my e-mails ) his tone was that I was bothering him. Everyone who is not fairly represented by the Union should sue them, maybe then they might care a little.

the rank and file choose to do nothing about it, we walk around with our heads up our ass happy we have a jobs that most are miserable to go to! we keep paying dues and complain to our loved ones who look at us like confused dogs. we really have no one to blame but ourselves and until we REALLY become "united" like the "U" in uft we will be stepped on by administrators, parents, and students. good luck toughing out the rest of the year.

We need to bring back the respect for teachers, specially when a looming shortage is on the horizon.

Same can be said for Principals Montebello, Greta Hawkins, Kristine Mustillo, Josephine Marsala, LoCursio, Speroni...just to name a few who are beyond the law of the land.

The UFT is united by not helping teachers. It is a complete sham all the way...

The Queens UFT office is useless and clueless. Rona Freiser does nothing and Marilyn Manley knows nothing. Neither one of them help teachers in great need. They are just happy they are not in our situation and thrilled with their do nothing jobs and get paid!

Solidarity put out a review of the UFT leadership that you can add to. I think Queens has worst comments left. www.uftsolidarity.org/uftreps

In the "corporate " mindset that permeates the DOE, principals are seen as "management", while teachers are the "workers". To go after principals, therefore, would be self-incriminating to the DOE

I've attempted to contact the Manhattan UFT office with issues just NOT to call Queens UFT- sadly, they won't talk to you if you're from out of the borough.

They do not even enforce the contract anymore. The UFT is part of the corruption in our schools.

It is very shameful how they stood in the sideliness without doing anything.

Mulgrew with his policies together with Fariña are engaging in systemic age discrimination, against the most experienced workforce that is being pushed out.

They do not even bother with the grievances.

They are very shameful people.

They all lie in your faces.

Our Union by not defending its veteran teachers is depriving students with good experienced teachers. With a looming shortage around the corner the Union is just irresponsible.

All you UFT reps you should be ashamed to side with corruption, and wrongdoing.

If you have 20 years or nore she will target you.

The UFT never supported any rallies against these abusive principals whose sole purpose is to destroy schools.

These UFT reps are a disgrace for the teachers they represent. They forgot why they are there.

They are really standing by the bad leadership principals. Just a disgrace.

Our UFT do not even take grievances that violate the contract anymore.