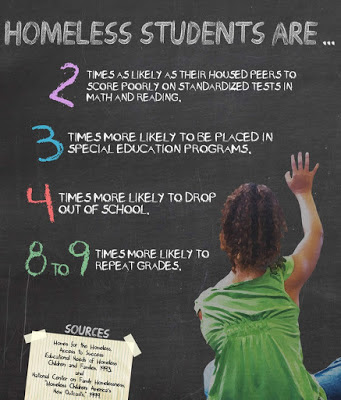 In New York State, thanks to ex-President Barack Obama and his Bill Gates inspired Race to the top program, we have a teacher evaluation system that counts all students as part of the teacher's effectiveness as an instructor.   Even students that aren't theirs!  To account for all different types of students, the State developed a complex mathematical formula that turned out to be "junk Science" and was exposed as a farce by the courts.  That brings me to how student growth of the most disadvantaged students affect the teacher evaluation system and why its not fair.

Interestingly, the dramatic rise in homeless students attending Bronx schools coincided with the closing of the many large comprehensive high schools with their abundant resources to help these academically needy children in the Borough and the opening of the many Bloomberg small schools who lacked many of the resources for these vulnerable students.

Studies have shown the homeless students are the most vulnerable population and the most difficult to educate, due to their mobility and lack of security outside of the schools.  Is it any wonder that schools resort to academic fraud to jack up graduation rates and encourage social promotion.  I bet the 155 schools are major beneficiaries of lax DOE oversight that allows students to move ahead despite their academic deficiencies.  Remember, homeless students are more likely to:


For the 155 schools that have an over 10% homeless student population, is it really fair for these teachers to be evaluated on the most difficult to educate, due to their homelessness and lack of security outside the school?  The answer is no!

Please forgive me for writing completely off topic. Do you know if the NYS budget for 2017-2018 continues to include reimbursement for the IRMMA additional monthly payment for Medicare? Palotta had sent out an email a few months ago with a warning about the legislature wanting to change this reimbursement, and have heard nothing about it since then. Nothing! One little email and poof, not a word more.

Good to hear somebody talking about EVALUATIONS. This is the elephant in the room Yes, school closures, ATR fiasco, etc. are all very important topics. However, the majority of teachers in NYC are most concerned with the state of evaluations as these evaluations are what puts both a roof over our heads and food on the table. We have been dealing with the insane Danielson Drive by observation for a few years and when the UFT had the chance to get us the state minimum of 2 observations they sold us out and got us 4 observations. I and the vast majority of teachers at my school fume on a weekly basis over these drive by observations and are the #1 cause of stress in our careers. Hey UFT, you listening???

I heard a rumor ATRs rotate next week.

Any truth to that?

The teacher evaluation system needs to be thoroughly analyzed.

Here is a link to the current NYCDOE APPR Plan:

Every one of us should be calling our local officials about this evaluation system. We need OPEDs that highlight exactly what you are writing about and the absurdity of it all!!! And we need a union that actually cares about their members ...hysterical! If the union won't organize a walk out on this issue, members should organize without them. What about a daily protest outside the governor's/mayor's office all summer long? Bring a regents exam and ask the public on the street to answer a question. If we don't start doing something, we deserve everything that is coming.

Danielson's has ruined the lives and carers of so many good and sincere teachers. Even those of us who are still surviving are dispirited and in a constant state of apprehension. The admins seem to be trained to come in looking for things to criticize, rather than praise. The problem is that the politicos don't care if teachers are suffering. The parents don't care because we are just public servants that can be easily replaced. The kids don't care because they are kids. I was planning on teaching for ten more years, but because of this poor excuse for an evaluation system I plan to retire early.

Just read the ICEUFT BLOG! Says the city plans on placing all ATRs in permanent positions next school year! I would like to hear from the UFT about this! Any other info around?

From my understanding the DOE has sent a waiver request to the NYSED to not have to do the "outside evaluators". Is there any chance that the NYSED will deny the DOE and we will end up with 2 observations? (One by principal and one by "outside evaluator".

Danielson hurts the most vulnerable and needy students in the city. We pretend that it's about the teacher but the fact is that special education students homeless students ESL students all teachers are running away from teaching them because they know that these students struggle to perform even basic skills and that the teachers rating will be low despite working as hard as humanly possible.