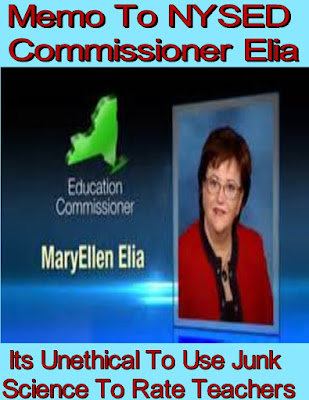 You would think that a person in the top spot of education in New York State would be smart enough not to touch a "third rail" and electrocute herself.  Well, New York State Education Department Commissioner, MaryEllen Elia did just that and she is now damaged her reputation and is in danger of losing her job because of it.

Commissioner MaryEllen Elia, who still thinks "junk Science" should be used to evaluate teachers and students and is against the "opt out" movement, had commented on the controversy that an Oswego high school teacher inappropriately gave to his high schoolstudents that asked them to take sides on the Nazi's "final solution", the extermination of the Jews.  The project and the controversy hit social media big time and here is what our Commissioner first said, when asked to comment on the highly explosive issue:

“I think it’s certainly a question where you want students to think on both sides and analyze … which position a person is taking. That idea of being able to identify the perspective an article has or a writer has is a very important skill.”

That's right, in an assignment that crossed a line that should never have been crossed, the Commissioner, instead of condemning the assignment, thought it was an appropriate "critical thinking" skill for high schoolers to analyze.  Unbelievable!

Well, as you can imagine, the shit hit the fan and many Jewish and parent organizations throughout the State complained about the assignment and her supportive response to the assignment.  In fact one Parent Teacher Association, Hastings on the Hudson, has asked that Ms. Elia to either resign or be removed as Commissioner.

The Commissioner, under intense political pressure and continuous media inquires, retracted her original comment and said the following:

“Since first learning of the assignment, I’ve done my homework to determine the facts in this situation. I spoke with district officials about this serious matter. We agree the assignment should not have been given. The teacher apologized and the assignment will not be used in the future.”

The Commissioner's response was entirely inadequate and instead of apologizing for her insensitive and wrongheaded  comment supporting the assignment, she simply said on further review, the assignment should not have been given.  Maybe she needs to take a course on the Holocaust as a condition for continuing as Commissioner of the New York State Education Department. You can read the entire story Here.
Posted by Chaz at 7:31 PM

A course on the Holocaust may not suffice to overcome this level of ignorance and insensitivity.

Sorry Chaz, this is really not a story that has any effect on teachers in NYS/NYC. just shows that MaryEllen is ridiculous but we all already knew that.

@Anonymous 10:45 pm
Woah, this story is relevant for all of us, including those beyond the borders of education systems because it is a symptom of the ignorance of our society as a whole.

I had heard bits of the story. Thank you Chaz for posting the entire story. Important information in a time when we have just had a very conservative, and narrow minded appointee to the life long position of judge on the Supreme Court.

We need to bring light into the darkness of ignorance that reigns in this land.

This assignment opens up a whole new realm of Common Core-ready projects:

"Slavery: Both Sides of the Story"
"The Spanish Inquisition: What's All the Fuss?
"Should the Romans have Crucified That Trouble-Making Carpenter from Bethlehem?"
"Nuclear War: It's Not All Bad"

The possibilities are endless. Thank you, Commisioner Elia.

Elia is not so much a Holocaust denier as a Holocaust debator. Truth is always somewhere in the middle. Any Commissioner of Education knows that. This "final solution" flap reminds me of the time I sought finality from her regarding a cold corruption case involving Chancellor Carmen Farina and Special Commissioner of Investigation Richard Condon.

During an amicable Manhattan streetside chat on August 20, 2015, I explained that the disputed case could be solved, if she would arrange an audit of the inexplicably never-audited Regents exams that I and five eyewitness teachers, including her boyfriend now husband, claimed were inflated. A smoking 97-7 65 bump was confirmed in a report by NYSED's Assessment Bureau. Nevertheless, Condon covered up the state's devastating analysis, refused to approve a standard forensic audit or "rescoring" that his own expert witness testified was "critical," and declared in a 67-page report that there was no credible evidence of cheating.

"Send me what you have," Elia said on tape, seeming sincere. "I can tell you that in the New York State office in Albany I'm not covering up." If only. I sent her several documents containing incontestable proof of Farina's and Condon's mains sales. Breaking her promise, she failed to reply.

I must disagree with you. The post is important because she supported high school students who were taking the side for exterminating the Jews. A view that cannot be justified as educational.

Insensitive, boorish, ignorant, and incredibly offensive - I would expect nothing less from a NYSED commissioner. It's the reason so many parochial schools were started and religious parents of all faiths will not send their children to public schools. In this climate, with Trump saying he wants vouchers for those parochial schools - she should at the very least apologize.

And still Paladino sits on the Buffalo School Board.
NYSED Commissioner is not just a politician, but should be a thoughtful voice for what is right.

Whoops, I omitted the key antecedent in my cold case comment above. Herewith the corrected sentence with the missing antecedent in caps:

"During an amicable Manhattan streetside chat on August 20, 2015, I explained that the disputed case could be solved, if she would arrange an audit of the inexplicably never-audited Regents exams that I and five eyewitness teachers, including THE CHEATING AP's boyfriend now husband, claimed were inflated."

A call to the Regents to remove Elia here.
https://actionnetwork.org/letters/board-of-regents-must-remove-commissioner-elia?source=direct_link&