Why Have Teacher Salaries Remain Essentially Flat Since 1990? Its Demographics. 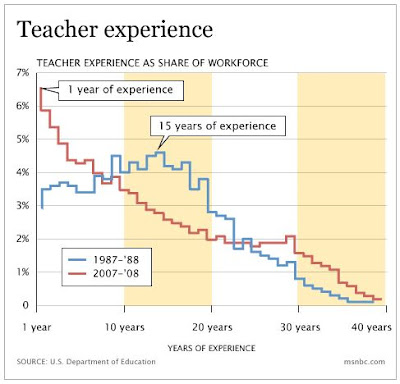 The answer is the demographics of the teaching profession.  Back in 1990 teaching was considered a long-term professional career with the average teacher working 15 years and that there were more 20 year teachers than new teachers in the nation's public schools.  However, that all changed with people like Bill Gates, Michael Bloomberg, and Eli Broad and the deep pocketed education reform organizations who demonized and blamed teachers for society's ills.  The buzz word was "teacher accountability" and all students could succeed if only they had a "quality teacher" in the classroom.  This resulted in States developing teacher evaluation systems, complete with "junk Science" called the Value Added Method (VAM) that was supposed to measure student growth and assign a value to a teacher's effectiveness.  The VAM errors were so bad that many States are revising or abandoning  their hastily developed teacher evaluation systems.  Unfortunately, the damage to the education system has been already done.   Teacher experience, once prized, was considered unnecessary as administrators wanted young and cheap teachers who were easier to control. In places like New York City, hiring experienced teachers came with a financial liability to the school.  Many long-term teachers have resigned or took early retirement due to the added stress and unfair evaluation metrics being used to grade them.  The result is an emerging teacher shortage nationwide as fewer prospective teachers are going into the profession and less teachers are staying long-term.

The chart above shows how the demographics have changed during the era of education reform.  Before education reform the majority of teachers stayed for 15 years and longer and were fully vested in their students educational goals while  getting a livable wage and a secure pension,  Now that education reform has done its damage to the teaching profession, students are subject to high teacher turnover, an unstable school environment, and reduced educational achievement as new teachers struggle to learn and teach the curriculum.  The bottom line is that the students are simply guinea pigs to untested.programs, unnecessary field tests, and a steep learning curve for the "newbie" teachers.

Is it any wonder that the average teacher salary nationwide has remained essentially unchanged?  The majority of teachers are now "newbies", with one year of experience and what was once a long-term professional career has become a stepping stone, to a career outside the classroom.  How that is good for student academic achievement is beyond me.

I just got my ten years in to be fully vested. That was my goal, as I know that education is no longer a career but something of a temp job for the young. I have seen so much abuse by principals over the last five years especially. It is terrible to see many colleagues reduced to tears, shaking with fear, under intense emotional pressure, being bullied, getting PTSD - all from bully, low-skilled mean school 'leaders.' It is just awful. I have seen good teachers fired literally only because the principal wanted to look tough. I plan on getting out at 55, regardless of how small my pension is. The mental torture and unfair expectations are not worth it.

I totally disagree with you Chaz. New York is a super gold mine unlike any other state regarding teacher salaries. How much are teachers getting paid in Utah or Iowa? How bout Alabama or Idaho? I have a niece who teaches in Missouri and after 11 years I believe she's around 38K. Are you kidding me? We will be making 120K top salary in less than 2 years from now! That's more than most lawyers working 14 hour days. Yes it takes 22 years unfortunately but the $$$ is there like no other state. I remember my mom topped out in NYC at 60K and now it will literally double, that's a 100% increase. I don't understand your article on salaries. The teachers in NYC have benefitted greatly, especially under Bloomberg. I didn't follow your graph at all. All I know is that I will be at 120K soon with a 6th class of 12K plus per session. I will literally be making more than some doctors and dentists. The salaries are fine. Your post is odd.

I'm sooooooo happy I signed up for 55/25. One year to go, just have to defend myself.

First, I must question your intelligence. If you look at the graph the reason the average teacher salary has remained flat is the influx of "newbies" who make half of whatyou make. That is the reason.

Second, the school year coming up, the school will need to pay you out of their budget not the DOE. Let's see if you will be getting a sixth class?

Finally, the punitive Danielson rubric and added stress are discouraging college graduates in NYC from going into teaching. Just ask professors at the teaching colleges, they will tell you that their classes are half full

I'm glad your happy, too bad most everybody who teaches in the classroom can't wait to retire. Maybe that's because you are not a classroom teacher?

Very few, rightfully, are going into teaching. I don't know why anyone would. Not only are those teaching classes half full, but all other classes, at the community colleges, are filled with our students. The same nimrods that can't follow directions, are never told no and that have graduated just for attending. Community colleges in NYC are just like high schools and run like them as well. http://nypost.com/2016/07/10/i-disciplined-one-of-my-black-students-and-cuny-fired-me/ Will they be allowed to graduate not knowing anything, as well?

Anon 6:10 to add on to what Chaz said, you sound like somebody who is painfully apathetic to what is has and will continue to go on in the years to come with the teaching profession.

2. As everybody knows the salaries are also in part justified by the equally long hours spent outside the classroom.

3. The turnover rate is so high, that a significant amount >50% of teachers will leave either voluntarily or involuntarily within a relatively short time of their appointment as teachers in the NYC school system. This was kinda the whole of point of the chart in the first place. Despite several raises given in the past several decades the Average teacher salary remains the virtually the same as it was back in the early 1990s. Most tier 6 and many tier 4 will never stay in the system long enough to get that 120k..And for argument sake even if they do things are pretty miserable when you know that you're targeted.

I could care less about any Tier V or VI person who comes in now. My original thought process was about the salaries. Chaz wrote they've remained flat but I beg to differ. Like I said, in less than 2 years my base salary will be 120K. Since I'm a Science teacher in high school, I am pretty much guaranteed a 6th class at an extra 12K. Throw in per session whether it be coaching track or curriculum writing, etc, I'm literally looking at 150K. You're telling me the salary is flat? Sounds pretty ridiculous to me. I'm never retiring. I'm going to destroy this salary year after year after year while watching my TDA fly. People are so negative on here. Of course I'm aware that certain teachers are being targeted, but there's a reason for that. It's because certain teachers don't know how to blend in and just shut the _______ up. No, they have to argue, file grievances, complain, nag, bitch, talk trash behind people's backs, etc. You see, I just go in and mind my business and do the best I can with whatever kids are in front of me. I am actually very thankful to be making the salary that I do and look forward to the heavy increases shortly (not to mention the retro of 87% more by 2020). Yes 2020 is far off but I don't care because the money keeps coming and Chaz, sorry pal, this article of the flat salaries was your worst in a while. Teachers are making a killing. I'm not talking about newbies and I don't care if they stay 1 year, 3 years, 5 years. It means nothing to me. Additionally I don't care if colleges have seen a 50% drop in education courses, it means nothing to me. Right now, I am entitled. I'm entitled to this salary and I'm taking it.

This is Anon 6:10. I'm in my mother's basement crunching numbers and I am so good to go. 7 more years and yippee, it is off to that gravy train. We make great bank (super duper gold mine) here in NYC.
I admit I am not a teacher but I sort of pretend it when I post here. Next week, I am the Queen of England.

to 6:10 - Look at Long Island salaries; NYC teachers are not on a par with many of the LI districts and there are no Leadership Academy psychos. However, Nationwide, Chaz's data is right on the mark.

A lot of the teachers who relatively happy and optimistic are those with a significant amount of time in BEFORE the Danielson's debacle and the new emphasis on firing/torturing teachers to 'reform' education.

If I have 20 or more years in, what do I care if they put me on the road to a 3020 hearing? I've made good money for so long and I can collect my pension in a few years anyway. Maybe I will live off my savings and investments for 5-7 years or get a tutoring job or something to tide me over.

For everyone else with less than 15 years, especially less than 10 or even 5, it is brutal out there in the schools with all the Leadership principals wanting to fire us to look tough. We get 18 year olds in ninth grade with 2nd grade skills! What can we do?

6:10 here. What an immature post. Been teaching since 93 my friend and I have my own basement, no need to go to mom's. Your Summer's not going to well hih? Dreading going back to work in September for that principal that hates you? You're that guy right? The one that's always complaining? Yes, that's you, the complainer. Probably one of those fake push in teachers right? I'm so glad you hate your job Mr. Miserable.

Really? Did you just try to compare us to Long Island? That's ridiculous. You got some brilliant people on here Chaz. Enjoy the summer!

Slightly askew comment - but MSNBC is a pretty big outfit. They really could use a data person to tell them about their charts.

This should have been presented as a bar chart - the combined areas give the number of teachers in each experience range. Don't know why they have the horizontal lines (like the tops of the bars they forgot?) for each data point, in a line graph. Those lines show no trends... they outline the profile of the teaching force for each of those years.

6:10 here again. I am not and never will be the Queen of England. You are an imposter. Even if I am an a basement, it is not my mom's. Or your mom's . Whatever. Who cares whose basement anyway? Stop complaining - we are in fat city making beaucoup bucks. You are just complaining as usual.

Thanks for sharing the great information. It is well written!!

for preparing bank exam and group exam , we are providing an online test model questions papers

I really hope that your article. Is very nice content in your blog.
Python Training in Chennai