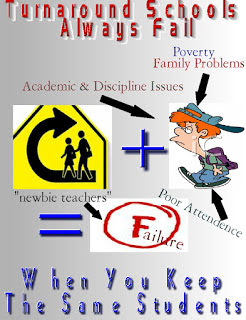 One of the many issues facing the renewal schools is not only the poor academic skills of the student body but the feeling that these schools are unsafe for students and staff alike.  In Queens, August Martin and John Adams high schools were declared "out of time" and many of the staff either refused to reapply for their jobs or were not selected, replaced by inexperienced or "newbie" teachers.  How that helps these schools and their students are beyond me.  Then there is William Cullen Bryant High School with one of the worst Principals in the City pushing out experienced staff and allegedly giving double credits to the students.  How about the infamous Flushing High School who has had five principals in six years and where massive excessing occurred wile staff morale is at rock bottom.  Finally, there are Martin Van Buren and Richmond Hill where the most weapons were confiscated and most arrests occurred.  Who in their right mind would risk their reputation and well-being working in these schools?

Interestingly, the Chapter Leader of Richmond Hill has been playing up the school while admitting that "working at Richmond Hill requires a huge commitment", meaning that teachers are under continuous pressure to improve student performance or else. Moreover, the Principal Neil Garnesh is rated poorly by many teachers and is in the bottom rung of trust for High School principals in Queens.  Finally, the school cannot attract academically proficient students to the school and has many teachers not certified in subjects they are teaching in (Earth Science is a prime example).  Now it seems Richmond Hill has a new distinction, the school with the most student arrests in Queens.

Cosmetic changes to the renewal schools is not the answer,  First, hire "the best and not cheapest" teachers for staff and develop a magnet program (Gateway) for academically performing students Second,  bring back high school zoning so that the schools could retain more academically performing students in the neighborhood.   Finally, recruit a school administration that willing to collaborate, .and not dictate to the staff.  No :Leadership Academy Principals please.  These three simple steps will slowly improve the renewal schools not how its being done by the DOE.  More about the DOE's renewal school failure in my next post.
Posted by Chaz at 1:44 PM

You might be right but as an ATR I have been in your school the last two years and it's a real hellhole and I was afraid for my safety there. Some of the worst students in Queens are dumped into your school and walk (run) the halls throughout the day.

Said the same thing on another blog and was called a racists and a bad teacher. That Ed notes guy told me it was my fault the kids don't behave. Sounds like he gets his talking points from Farina and the DOE. Don't read his blog if he's going to blame teachers!!

In Gateway teachers are in danger from other direction. While the students are well behaved in most cases, teachers are being attack by a teachers. Principal Henry and her APs recruited a hit squad called "brown nose" committee to help destroy other teachers' careers. You can become a target for anything: not participating in grade cheating, corruption,being whistleblower, standing up for students, grieving, for being a male teachers, long time Gateway teacher, emigrant, for being well educated and skilled. "Brown nose "committee will help Henry and APs(Samaroo and Santiago) to isolate the target, set one up with impossible teaching conditions, write made up complaints, fabricate ineffective evaluations, harm target physically by creating hazardous working conditions. Basically every trick in the book for targeting teachers.Henry and the "brown nose committee use students to participate in this too. Students who speak up about this are becoming a target too. There were instances where Henry and the bunch tried to block student from getting to colleges. What are you getting from Henry in return for "services"? Superstars of " brown nose" committee getting payed( per session, leadership positions grated with no regards to contract), getting shorter work day, preferred teaching program, better students, preferred co-teacher, comp time position. Or you get to keep your job if you lower rank scum.Where is the UFT? Chapter leader is one of the stars of the 'bn"committee. Region helps Henry handle the teachers who try to fight this off. Over 85 % ( fewer then 50 staff members)of (longtime , descent)Gateway teachers left due to transfers, forced retirement and termination in 3 years. This year alone 3 teachers were set for termination.Henry was rated 3rd worse in Queens for trust and professionalism.Henry and the APs are getting sued.Henry is still there because her pal Mendez keep everything under raps. What a shame

I bet that Richmond Hill Chapter leader is Unity and they are probably ordered to defend the school and principal.
And to anon 8:15 - you said a lot more than this on my blog -- you attacked all kids as a class - or race it you will - saying they called you all sorts of things. I offered up a number of people who taught in schools like these and still do and did not have that experience. James Eterno for instance who contradicted you. Yes These school are dangerous and out of control. There is lots of blame to go around - mostly the city and school administrations and lack of having enough services to address the issues. Blaming the students who are also victims is where i draw the line. Most commenters and ATRs do get it.

from my own personal experience as a former teacher at Richmond Hill, the chapter leader had spaghetti for a backbone. He did not like the principal Neil Ganesh, but would never said it to his face. I don't know what caucus he was partial to and I don't really care either. Alot of his anger stems from Ganesh wrongfully removing a veteran administrator in the English department whom he was loyal to and replacing that person with a math certified AP. I can't say that I blame him in that regard.

Richmond Hill should absolutely be a school to avoid. Neil Ganesh is not trustworthy and is of bad overall character. The same is true for the administrators that he personally brought in replacing the existing administrators at the school who were far more qualified.

Some of the people that Ganesh brought in who are highly unqualified, uneducated , and are nothing more than a cancer to the school are Christine Peterson (ISS AP) and Denise Gillmore Irving (Head of Security)

Both of these people had absolutely no experience in the departments that they became administrators in prior to becoming so, and were of horrible quality.

I worked as a sub at Richmond Hill and John Adams about 15 years ago- both nice, over-crowded, new American schools. Too bad the administrators are not getting their act together- the students deserve better.

Sure Ed blame the teacher and James backed you up because he felt bad for you for losing the debate. He saw how your first reaction was to blame the teacher just like the DOE. You showed your true colors. Are we still allowed to say colors?

By the way Ed I am an ATR I guess youbwill blame me for that also. I've been to all these really bad schools in queens and have been cursed out many times for no reason. Walk a mile in my shoes and see how I'm treated . We all know the kids who act this way. Sonetimes the truth hurts and burst your liberal mentality. Enjoy your retirement and thank you for your continued service to education.

One more thing if you read all my posts you would see i never once blamed the students. In fact I feel sorry for them and the way they have been mistreated by 40 yrs of liberalism

I worked at Richmond hill as a Provisional ATR last school year and I was committed to the job. I put in a lot of work because I am looking for permanent placement. I went to the Witsi common planning, used implemented this strategy in my classes. Even though I was a dedicated member of the department, I still received ineffectives on my observations. When I put in an APPR complaint I was targeted with even more ineffective observations, you are not allowed to speak up for yourself there.
The UFT leader, who is Unity and also works at the uft office after school, acts like he doesn't want to be bothered and doesn't follow up. He doesn't have is own office, so you have to go looking for him in the english department. I wouldn't suggest anyone work there. I have also been teaching for 21 years and I'm 44 and was hoping to teach another 20 years but I'm being pushed out of the system. My co-teacher, who was a first year fellow teacher came to me for help with everything and her observation were all effective.

As an atr the best thing is to avoid being placed. I have had many offers to be placed but somehow tactfully refused without really refusing. Have been an atr for the last 4 yrs and try to stay invisible. I do whatever they tell me and smile. No need for any confrontations with secretaries who treat you like shit. I have 21 yrs in and with a union who is working against us it would be foolish to look for placement. sorry to say but that's the truth. Why would I want to subject myself to the crap appointed teachers have to put up with. I go in cover whatever they give me go home and in a week or 2 I'm gone to the next school. A lot of bad schools, admins, parents, students and teachers all over queens. Mistreated by the students, secretaries, admins, parents and my fellow teachers. What a profession I have chosen. Shame on me!!!

Anon my story is even more unfortunate. I was a fourth year untenured teacher who was discontinued at the end of my fourth year. In the three years prior I was always effective. Ganesh needed to give a certain number of ineffective so he purposely targeted me and another teacher that I worked with. He chose us for the fact that we filed APPR complaints. Richmond Hill was such an unstable school that there were three different principals in the last four years I was there and in my department 5 APs.

Just out of curiosity, who was your AP?