Why Hillary Clinton Is Untrustworthy When It Comes To Public Education. 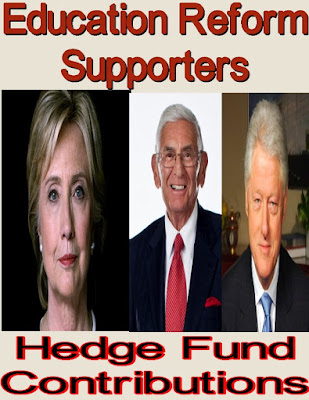 I have been hearing how Hillary Clinton is the "lesser of the two evils" when it comes to whom I should vote for.  According to my fellow blogger nyc educator, he will be holding his nose and vote for Hillary Clinton simply because Donald Trump is worse.   If one looks at the education planks of the two parties, its obvious the Democratic party plank is pro public school while the Republican plank is pro charter and would allow vouchers which would dismantle the public school sector.  However, experience has shown that the elected President usually disregards their party's plank and imposes his or her own policies.  Just look at what President Obama did to the public schools during his eight years as President?  He bribed states in using hastily developed high-stakes Common Core based testing and teacher evaluations using "junk Science" that has resulted in massive teacher shortages nationwide.  Moreover, he is a charter school supporter and education reformer that has hurt the public schools by diverting scarce resources to the charter schools without the accountability demanded in the public school sector.

Now back to Hillary Clinton. after the Democratic National Committee unveiled their education plank, Eli Broad, one of the most powerful education reformers in the country was concerned.  However, according to the Wall Street Journal, Hillary Clinton s husband Bill Clinton quickly reassured Mr. Broad that the DNC's agenda was not Hillary's and she will continue to support the charter school sector.  Now it seems that the deep-pocketed Hedge Funds who support and fund charter schools and education reform organizations have contributed,  according to a Wall Street Journal article,  to Hillary Clinton's campaign $48.5 million dollars in Hedge Fund donations compared to $19,000 for Donald Trump.  Do you really think that Hillary Clinton will not support the charter schools given the massive amounts of money the hedge fund community has given to her campaign and their close relationship with Eli Broad?

If you really trust Hillary Clinton to safeguard public school education then I have a bridge in Brooklyn to sell you.
Posted by Chaz at 8:57 AM

I remember Mr, Obama absolutely gleeful when those 65 teachers were fired en masse in R.I. In public education, Obama =King=Duncan=Klein=Bloomberg=Clintons.

It is not a stretch to say that Ms. Clinton is woefully dishonest. She is also fairly incompetent. While verbalizing such truths is usually met by peculiar and misdirecting cries of 'sexism' and 'Tump's an egomaniacal ignoramus', nevertheless it is true.
She won't be good for teachers and students.

I'm a little disappointed in this post. I don't think you intended this, but it kind of implies I said things that I absolutely did not.


While I think Trump is even worse, given Baby Trump's speech and the Donald's talk about "choice," I never suggested I expected Hillary to safeguard public education, nor did I paint her as favorable to public education. I never said she opposed charters. I wrote primarily about non-education issues that made Trump unacceptable to me. Trump is an unapologetic bigot. Having grown up knowing bigotry and having lived most of my adult life serving children who are its targets, I find his ideas repulsive and unconscionable.

I think you are reading too much into what I said. I simply stated that you believe Hillary Clinton is preferable to Donald Trump. I never stated or even implied that you trust Hillary Clinton to support public education. That's why I used the phrase "he's holding his nose".

Thanks Chaz. I appreciate that.

The point is that with Trump there is no chance that public education will be protected while a Clinton presidency there is a slight chance it will be salvaged. Clinton's VP pick Caine supports Public Education. Trump knows nothing about public education, only that he is against common core. However, his son Donny Jr. seems to have been persuaded by the charter movement as he recently gave an interview where he verbally berated teachers. The bottom line public schools, tenure, pensions are an endangered species and we have no conservation movement to protect us. This job will be unrecognizable in the next 20 years. Neither one of these two will do teachers any favors. We need to focus on Constitutional convention 2017 to make sure our pension is guaranteed for the next 20 years.

While I agree that Trump is a disaster for public school, you could count on the Democrats following the DNC education platform and stymie the Donald. On the other hand if Hillary gets in, look for a stealth attack on public schools by supporting the charter movement and sealing dollars from the public schools.

Just see what damage Barack Obama did to public education worse than Bush who had a Democratic Senate to stop him.

It was a pleasant shock to find an independent voice, in Chaz, who sees through Hillary Clinton's well-packaged fluff. The list of big-bank donors to her controversial Clinton Foundation, which is reported to give 90 percent to its administrators and the rest to charity, should give any free thinker, pause. Teachers need to teach. Yet, failed federal mandates, like redundant teacher assessment, sadistic student testing, and Common Core must end. It is time to rethink the federal government's role in education.The only candidate who understands the connection between federal intrusion in the classrooms and student performance, is Donald Trump. Trump said that he will get the federal government out of schools and return decision-making, like charter school issues, to the states. That's what the Framers intended in Article 10, for good reason. By Retired Teacher, Amelia Arcamone-Makinano

The charter school movement/privatization and the sucking of money out of the public sector by privateers, runs the spectrum of politics.....dem/rep/independents.... EVERYONE IS IN ON IT!

Chaz, you hit the nail on the head. Hillary Clinton will be beholden to the education reform organizations and people like Eli Broad, Bill Gates, and Michael Bloomberg. This will mean that more funding of charter schools, more punitive rubrics for teachers, and less money for the traditional public schools.

Obama continued the Bush policies on education and war.
Obama's race to the top damaged public school teachers as much as if not more than the charter school choice movement. Public Schools are a piggy bank for prostitute politicians and their hedge fund pimps. Union leaders are scum who will take cash crumbs and a free lunch from any privatize promoting hedge hog. Teachers are just pawns getting played and paid and hoping that the whole system holds out just long enough so they can collect their pensions. The public does care about public schools or teachers' pension and the politicians know it. Do you think the average parent cares about the concept of a public school? To the public, charter schools are public schools in the sense they are providing a free public service. As long as parents can drop their kid off for 6-8 hours a day, the majority of them are not going to care about the plight of public schools. So Dems are gonna screws teachers; Republicans are gonna screw teachers. Get used to it or get out if you can. It is not going to get better so buckle up and max out that TDA so that when they try to steal your pension you'll still have something to show for your 25 years of service.

Let's remember that it was Bill Clinton who pushed through the legislation that made contributing to charter schools a tax credit endeavor, a cash cow that just keeps on giving to hedge fundies, banks, foreign nationals like Gulen, at the end of his last term. Also provides a path to citizenship for a foreign donor and family.

Bottom line: there is no one to vote for. The choices are vile.

Wow! Are those things on the side of Broads head his ears?

Notice they never gave us the full info for teachers choice this year. The website refers to 2015-2016. They say we got an increase. No specific dollar amount mentioned. Typical. Although, we have far bigger problems.

Bloomberg supporting Clinton speaks volume. Clinton will privatize as well. I trust trump more than bought out Clinton. Make me an ATR so I can avoid agony this year!

Unfortunately, far too many Americans view a third party vote as a wasted vote. It may be in the sense that the 3rd party candidate, be it Gary Johnson, Jill Stein or Vermin Supreme, will never win a national election, however successful third party bids do send messages to those who are elected that the issues matter.

As I reckon the majority here are New Yorkers, understand that if Hillary loses NY, it'll be her fault, not ours for voting 3rd party. It's not like we live in a swing state. I'll be voting for a 3rd party candidate, as I would recommend others to also consider doing.

Education is not a major issue in this election and was barely mentioned at either convention, which signals a continuation of status quo. The Clinton Foundation, a key to Clinton power, has so far barely been mentioned in the campaigns. A lot of the ed reformers are in bed with the same people connected to the foundation. Public school teachers are a "captive electorate" in this campaign - our unions will support Hillary and ask for nothing in return. And get status quo. No doubt if there is big money involved in charters and reforms the Clintons will be happy to join in, as would Trump. As far as Hillary goes, let's see who she picks for her Ed Dept. leadership. And for us, let's see what Cuomo does with the rest of his term.

Trump makes stupid comments, we all know this, but he is a businessman with experience in negotiating and compromising. He wants to get things done. Strangely enough, I think he might be better for us teachers than the Clinton/Bloomberg/hedge fund manager alliance.

I would bet Trump hasn't spent one second thinking about public education in this campaign. When he gets around to it, he will favor charters and private schools because that is all he and his friends and family know about or care about, and he will use his amazing business acumen to analyze public education, first saying it is horrible, second that only he can fix it, and then to demonize teachers while waffling about a specific plan.

You are right, that's why I will not be voting for either one of them.

HILARIOUS!!! The video Hillary Clinton Does Not Want You To See. Must Watch! Hillary Clinton tried to ban this video! But Hillary Can't Hide THIS Anymore! http:///cnn.com/breakingnews/Top-10-Things-Hillary-Clinton-Doesn't-Want-You-To-Know